Please note: Volume 1 is now printed to order, and delivery will typically be 2-3 weeks from the point of order. Thanks, Simon. (25th March 2017)

“Fortress Scotland” is conceived as a site by site examination of the fortified places of Scotland, and is made up of a series of volumes with a geographical focus. This first volume covers the lowland area between the rivers Spey and Findhorn, and the lands within the entire Findhorn river system, including a total of 65 sites within the main “gazetteer” section. Included within this list are castles, fortified houses, hill forts and earthworks. 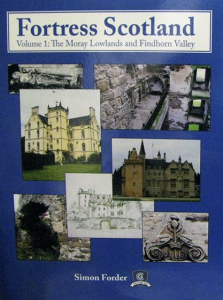 The entry for each site is accompanied by colour photographs taken by the author, and in some cases also by pencil sketches by the author. These sketches are a combination of reconstructions and of early images of the buildings in question. The entry contains a description of the remains today, along with the development of the site throughout its occupation, and a history of events that took place at and around the site. In addition, the stories are told of the families and individuals who owned and lived at the site. The rise and fall of the Dunbars, Inneses, Gordons, Sutherlands, Murrays, Douglases and of course the royal Stewarts is told through these stories.

Historically, the area covered by this first volume is incredibly rich. It was at the very extreme of Roman activity, an important part of one of the two great kingdoms of the Picts, conquered by the Norse Vikings and then by the southern Picts, and then the homeland of a dynasty of rivals to the early Kings of Scotland (including MacBeth), who rebelled regularly over nearly two hundred years before being eliminated. Separated from the main strength of the Crown by distance and the Grampians, this region required the Crown to appoint powerful lieutenants to control it, who themselves became the source of discord and rebellion through their autonomy and remoteness from royal authority.

“Fortress Scotland” is accompanied by a glossary of terms, an introductory essay setting the history of fortification within a local, regional and national context, and is completed with a number of appendices which provide details of the crannogs, “ha’hillocks”, early palisaded sites and potential Roman sites. A short introduction is provided to each appendix, followed by a further “gazetteer” list and analysis of the sites. A final appendix is titled “Manors and Mansions” and consists of locations put forward as possible castle sites (but for which no evidence has been found), and castellated mansions which are of later date.

“Fortress Scotland” brings together many strands in order to give a coherent and detailed assessment of Scotland’s fortified places. Incorporating archaeology, architecture, genealogy, geography, linguistics, as well as several years of hard copy and internet research at a local and national level, the individual articles in the gazetteer provide the most comprehensive history of these fascinating sites currently available.

If you would like to purchase a copy of Fortress Scotland Volume 1 then please contact me by email and I will advise the current situation.

P&P to Europe & the US is typically £10 extra, please contact me by email simon@thecastleguy.co.uk to arrange payment

Small Print
I do not collect any payment details from you. These are processed securely (https) by Paypal. I receive only details you provide and are used to communicate with you and ship your product.
Should you wish to order more than one copy, you can adjust that on the next screen.