Every now and again I see posts which suggest they contain a list of people’s top castles. By and large I don’t do that because I do think that each castle has its own unique features which makes it worthwhile visiting. However, there are definitely some which I feel are far more interesting than others. There are also a few which I have yet to visit but really want to. So I thought I would just put this little group of photos together so you know my personal perspective on the question.

And just so we are clear, this is in no particular order!!! 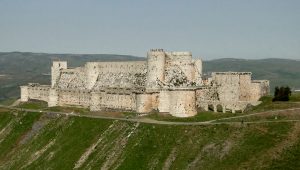 Krak des Chevaliers – the ultimate in Crusader castles, this is in Syria, and I haven’t been to it. It was rebuilt by the Knights Hospitaller in the mid 12th century and remained in their possession until its loss in 1271 to Baibars and the Mamluks. It was damaged in the recent war but is being repaired as it’s a World Heritage Site.

Chateau Gaillard – the castle was built by King Richard the Lionheart in the late 12th century to defend Normandy from invasion along the Seine valley. It was captured from King John’s men by King Philip of France after a famous siege which ended in 1204. From here Philip was able to complete the conquest of Normandy. 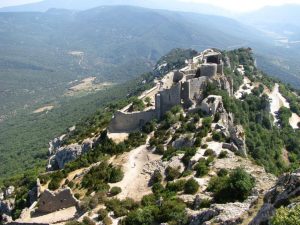 Peyrepertuse – the best of the “Cathar castles” in my opinion, it was occupied in Roman times and fortified in the 9th century. It was occupied by a Cathar noble who refused to surrender, and was besieged by the French Crown in 1240, who took it and strengthened with the upper courtyard area. It remained in use into the 17th century. 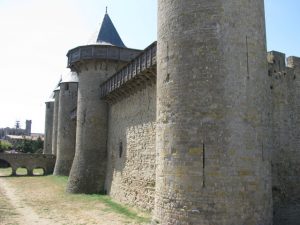 Carcassonne – the castle here has to be considered in conjunction with the fortified town. It is on a site fortified since Roman times, and was occupied by the Viscounts Trencavel who built the castle and repaired the old fortifications in the early 12th century. During the early 13th century crusade against the Cathars it was conquered by the French who annexed the lands to the crown in 1246 having strengthened the fortifications. It remained a military stronghold into the 17th century before being allowed to decay. It was heavily restored in the 19th century but is completely spectacular. If possible, I’d live there! 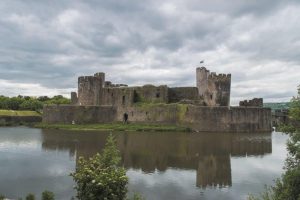 Caerphilly – the 13th century castle of the Clare earl of Gloucester staking his claim to this part of south Wales, the castle was repeatedly targeted by the Welsh as a breach of treaty, but to no avail. The extensive water defences survive to a large extent, and the restorations mean you can really get a feel for this massive and impressive place. 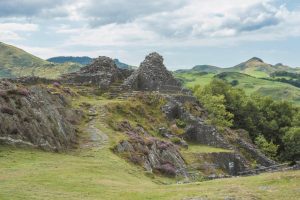 Castell-Y-Bere – this remote 13th century castle built by the princes of Gwynedd in the hills is charming and makes a nice contrast with the more massive fortresses of the English barons and king. It uses the natural contours of the rock as part of the defensive plan, and remains a rather eclectic ruin. I love it  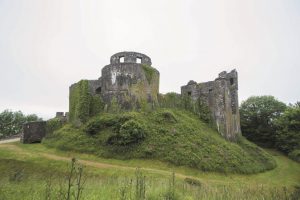 Dinefwr – the old castle of the princes of Deheubarth was strengthened and reworked by the Despensers in the 14th century. It remains one of the most evocative castles in Wales to me – having studied it for my undergraduate thesis, it holds a very special place in my heart, even with the silly 17th century modification at the top of the keep! 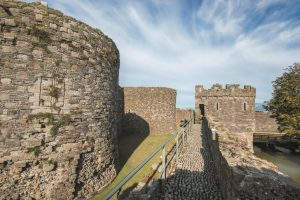 Beaumaris – I’ve selected Beaumaris of all Edward I’s castles in Wales because to me it sums up his approach to the conquest of the country. The ground plan of Beaumaris is potentially the best concentric castle – and was at the forefront of military technology in its day. It was founded in 1295 after the revolt of Madog ap Llywelyn, but was never finished. King Edward had overspent, and needed to concentrate his funding on trying to conquer Scotland. It remained in use until 1660. 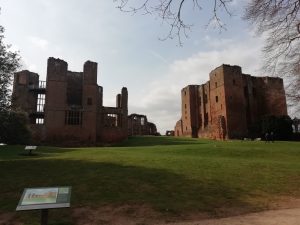 Kenilworth – this is the English equivalent to Caerphilly, but remained in active use far longer. Founded in the early 12th century by the Clinton family, it was reclaimed by Henry II and massively extended under King John. It was granted to Simon de Montfort in 1244, and besieged throughout 1266, at which point it became a royal castle again. It was repeatedly upgraded and was eventually the scene for a famous pageant put on for Queen Elizabeth I by the Earl of Leicester. 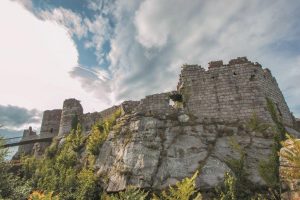 Beeston – the rock that Beeston Castle is built on was occupied in the Stone Age, but it was first established as a castle by Ranulf, Earl of Chester in the 1220s when he returned from crusade. After the earldom was absorbed into the Crown in 1237, it was much enlarged, and kept in repair as a royal castle through the 14th century. It was blown up by Parliament in 1646 after a siege. 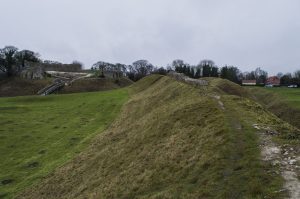 Castle Acre – there is an excellent motte and bailey castle at Castle Acre founded in the 1070s by William de Warenne, rebuilt in stone during the mid 12th century, when the original stone hall was intended to be converted into a tall keep. It remained with the family until it fell into ruin in the 14th century. It is accompanied by a planned Norman village and the ruins of a priory. 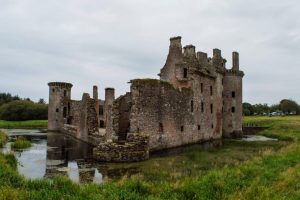 Caerlaverock – The principal defence of the West March in Scotland, Caerlaverock Castle is the second castle here (the foundations of the older castle can still be seen). It’s a triangular castle built by the Maxwells, besieged by the English in 1300, and then maintained by the Maxwells throughout the wars with England until it was partially demolished in the 17th century. 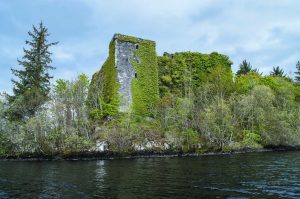 Innis Chonnel – This is perhaps the most impressive island castle in Scotland. The seat of the Campbells of Lochawe, it was probably founded by the MacDougalls in the 13th century and was certainly improved by the Campbells in the 15th century, when it took its final form of three very strongly defended courtyards. Clearly tricky to get to, it is definitely worth hiring a boat! 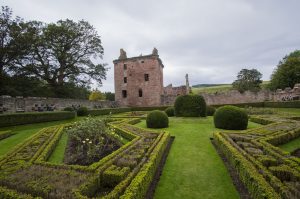 Edzell – the red stone tower and courtyard of the Lindsays at Edzell dates to the 16th century, replacing an earlier castle of which only the earth mound survives. It is one of the better surviving castles of its type and has beautiful restored gardens within the grounds. It fell into decline in the 18th century after a very peaceful life, and had already been gutted in 1746 when government troops garrisoned it against Jacobites. 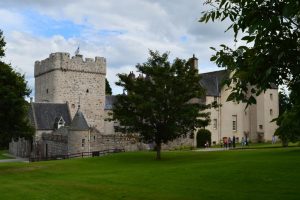 Drum – Drum Castle is still roofed, unusual for one of my lists. The oldest part is claimed to date back to the 13th century, but is probably later to my mind. It is the seat of the Irving family in Aberdeenshire, and was extended in the 16th, 17th and 19th centuries to form the very pleasant courtyard dwelling we see today. 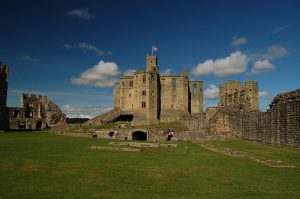 Warkworth – Warkworth is to my mind the premier castle in Northumberland. It dates back to the mid 12th century, although who built it first is unclear, and it clearly wasn’t that strong to start with. It was vastly improved by the fitzRichard family in the 13th century. The further strengthening of the castle against the Scots was subsidised by the Crown, who eventually granted it to the Percies in the 14th century, who further strengthened and modernised it before it fell to the crown in the 16th century. It was eventually blown up after the Civil War. 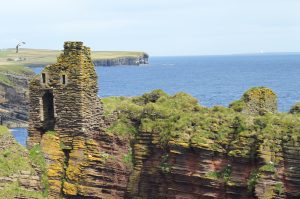 Bucholly – One of the best (and inaccessible) rock-stack castles of Caithness, Bucholly is at once picturesque, evocative, and downright scary. What can be seen today was built in the 15th century by the Mowat family, but the promontory may have been defended as early as the 12th century. The ditch and gatehouse formed the principal defence; behind this was a courtyard occupying the whole of the rock stack with ranges of buildings down each side of a central courtyard. It was perhaps abandoned in the 17th century.

Tintagel – King Arthur cannot be dissociated from Tintagel in popular imagination, and the discovery of the “Artognou Stone” here has done nothing to dispel the myth. Although Tintagel rock was occupied in the 6th century, the castle is 13th century in date and the work of Richard Earl of Cornwall. It was abandoned only a century later and when the isthmus linking the peninsular to the shore collapsed, the site was abandoned. Windy and exposed, it is nonetheless a marvellous site. 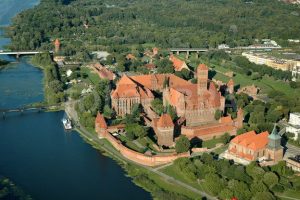 Malbork – this is the massive 13th century castle of the Teutonic Knights in Poland. It was founded when the Knights began to conquer Old Prussia, which was not a Christian region, and became their headquarters in the 14th century. The site in total covered 52 acres – the largest in Europe – and remained as a high-status residence into the 18th century. I have never been – but if I am ever in Poland… 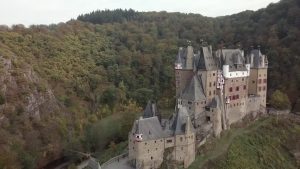 Eltz – sitting high on a spur, Eltz was first fortified in the 9th century, and was founded as a “Ganerbenberg” – which meant it belonged to several joint heirs. This meant that several heirs clubbed together to build a castle. In the case of Eltz there is the old tower and then three family sections making up the inner courtyard complex. It clearly has a very complex history, but is also one of the most picturesque castles in Germany to me. A large part of the castle is open to the public, having been extensively renovated in the 19th century. Again, I haven’t been, but is on a shortlist to visit!

And finally a bonus castle. This is a bit of a cheat as it is entirely modern, and as yet I havent been there, but I just have to one day. It is the castle being built entirely using medieval means in France – Guedelon. I would have loved to have been in a position to be involved in this project, but it looks as if it will be finished before I get there! One day…..

So, I hope you enjoyed that. It is a personal list, and I have tried to reflect the variety of sites I enjoy visiting.  Keep castling everybody!