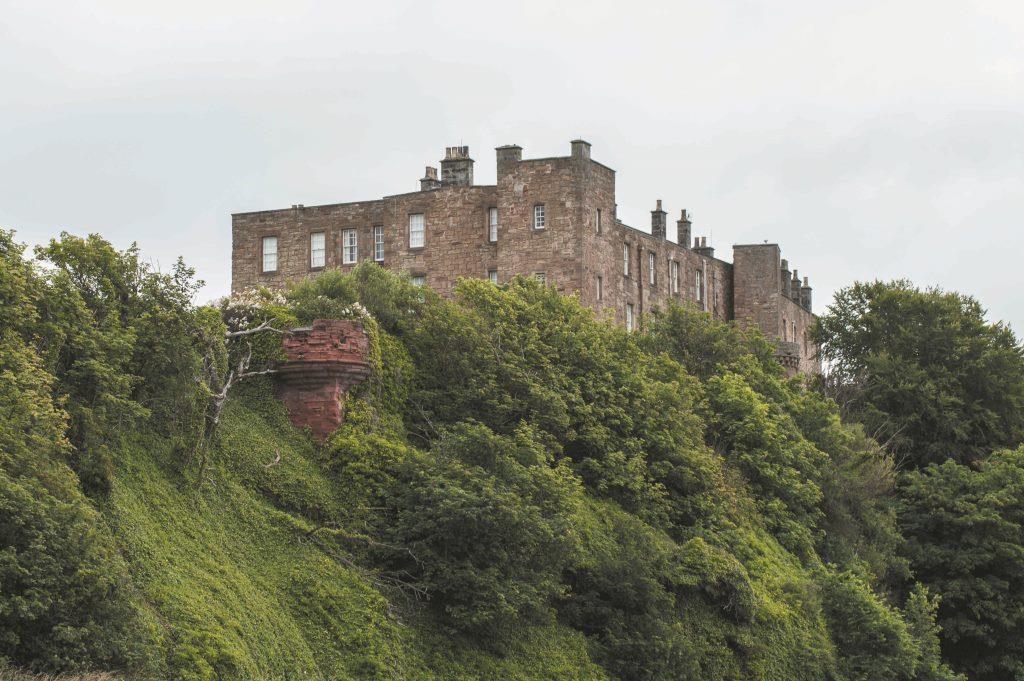 Wemyss Castle occupies a clifftop site in between the villages of East and West Wemyss on the southern coast of Fife. It is not entirely clear why this particular stretch of cliffs was chosen as the site for the castle to be built unless it was because of the caves beneath; there is no watercourse adjacent and appears to be little strategic value in the site beyond the cliffs, which provide defence for two sides of the castle – although it clearly has good views across the Firth of Forth.

The oldest part of Wemyss Castle is a much altered rectangular tower, believed to date from the 15th century although it would appear that no attempts to gain access to Wemyss Castle to carry out a detailed survey of the buildings have been successful since efforts to record historic buildings began. Much of the following is deduction from the listed building description, that on the RCAHMS, and the portal of HES. The layout of the castle is that of a quadrangular courtyard with a curving corner to the south-east and a projecting round tower at the north east corner; from the south-west corner a long wing extends along the clifftop which ends with a square tower, and a further block extends north-westwards. The tower is almost lost in the mass of additions that have taken place, but it occupies the north-west corner of the courtyard area. In addition to this is an outer wall running along the cliff edge to the south and east with round projecting towers; it is not possible to identify how – or if – this relates to the main castle buildings.

It is very likely that the old tower had a courtyard associated with it that occupied the same area as the courtyard today, but the original walls are long lost. In the 16th century they were rebuilt, and it seems likely that during the 16th and 17th centuries the courtyard became lined with ranges of residential buildings, and a formal vaulted entrance was built to the south of the old tower. It was also in the 17th century that the long wing extending to the south-west was added, and the extension of this wing to the north, which can be seen on Slezer’s depiction of the castle (erroneously labelled Dunotter). It is believed that in addition this wing was wider than it is today, partially filling the space between it and the old tower. Between 1874 and 1876 the castle was remodelled and further extended by Peddie and Kinnear, with the addition of a large porch to the north. It is the silhouette of this layout which can be seen on the early Ordnance Survey maps. In the 1950s much of the 19th century work was removed and further changes were made to the layout and appearance of the castle. Today most of the visible parts of Wemyss Castle are very stark and plain-looking, and it is not possible to see the old tower from the seashore which is the only public viewing point; in addition there is mature tree planting along the foreshore at the base of the cliffs which obscures views considerably.

The lands of Wemyss have been associated with the Wemyss family for as long as there are records, and traditionally before that. The first lords of Wemyss are supposed to have been descended from the early Earls of Fife, which is certainly a possibility. The first mention of Wemyss is the appearance of Michael de Wemyss who witnesses a document in the 1220s; his son Sir John appears in the 1260s as well as Sir Hugh, and in the 1290s another Sir Michael is recorded as lord of Wemyss, appearing on one occasion with his son Sir David. It is likely that the Wemyss family had a castle here, and equally likely that it was destroyed during the Wars of Independence. It is likely to have consisted of a defended courtyard, possibly with a ditch (although no remnant of this can be seen today) and may have been at least partially built in stone. In about 1342, Sir Michael Wemyss (son of Sir David) died, leaving four daughters as co-heiresses. It seems likely these daughters were fairly young, and perhaps not all of them reached adulthood. However at least two did, since by 1423, Easter Wemyss had passed into the hands of the Livingstones. In documents of this year, a castle at Wester Wemyss appears as the property of Sir John Wemyss of Reres, who may have married one of the daughters or inherited through being a descendant of Sir David. This is the first confirmed document to mention Wemyss Castle. By this date, the Wemyss family had started to exploit the coal fields on their land, and consequently soon became wealthy.

However it is unlikely that the castle was developed much in the years to follow this first mention. Sir John of Reres was dead by 1428, and his son David had died at a young age by 1430, leaving a child of about 5 to inherit the estates. The young John of Wemyss could not have taken possession of his estates until perhaps 1446, and once he did so, he embarked upon a project to recover the lost parts of the Wemyss estates, There are extensive records recording his purchases – and the lawsuits which followed. He undoubtedly had the time to carry out improvements at Wemyss Castle, but there is no evidence to suggest he did so before he died in 1502. He was followed by his son Sir John, who died in 1508, and Sir John’s son Sir David, who was killed at the battle of Flodden in 1513, having acquired more of the ancestral estate, and had the lands united into a single barony of Wemyss in 1510, with the castle referred to as the principal messuage. His son David was only 17 and was unable to take possession of the  estate until 1517. Alterations to the buildings within the courtyard have been considered to be early 16th century, but could be the work of any of these four lairds. David does not appear to have had an illustrious career, and was not knighted; he was followed by his son Sir John, who was resident in the 1560s when Queen Mary first met Henry Stewart, Lord Darnley at Wemyss Castle. Sir John was involved in a streetfight in Edinburgh with the laird of Airth, and also repelled an English fleet who were trying to land near Wemyss during the Rough Wooing, and lived to be about 80; his son David only survived him by 3 years, dying in 1596.

From this point onwards, Wemyss Castle remained a stately mansion, and I haven’t been able to confirm details of any military activity here. Little is known of the Sir John Wemyss who looked after the estate until 1621, but it seems probable that he carried out unidentified works at the castle, and further increased the family wealth through exploitation of coal and salt; his son John became a baronet in 1625, and the first Earl of Wemyss in 1633. He fought against Charles I in the 1640s, and died in 1649, to be succeeded by his son David, the 2nd earl. In 1651, David completed the process of reuniting the ancestral Wemyss lands with the acquisition of Easter Wemyss, which was renamed the Barony of Wemyss-shire. At this time, substantial extensions were carried out to the castle, including the building of the L-shaped wing to the south-west of the castle courtyard. It is this castle which appears in Slezer’s drawing. Substantial gardens were also planned and laid out. Earl David died in 1679, and was succeeded by his daughter Margaret; Margaret was then followed in 1705 by her son David, the 4th earl. This David was one of the commissioners who was responsible for the Treaty of Union with England in 1707. In 1745 his grandson, David Wemyss, Lord Elcho, fought for the Jacobites at Culloden, and forfeited his estates and title, and retired to an exile in France. His younger brother Francis assumed the title of earl, but it was a third brother, James, who was able to succeed to the estate and carry out further improvements to the gardens.

Wemyss Castle is not open to the public, and remains in the hands of the Wemyss family, but the gardens are open by appointment in the summer months.