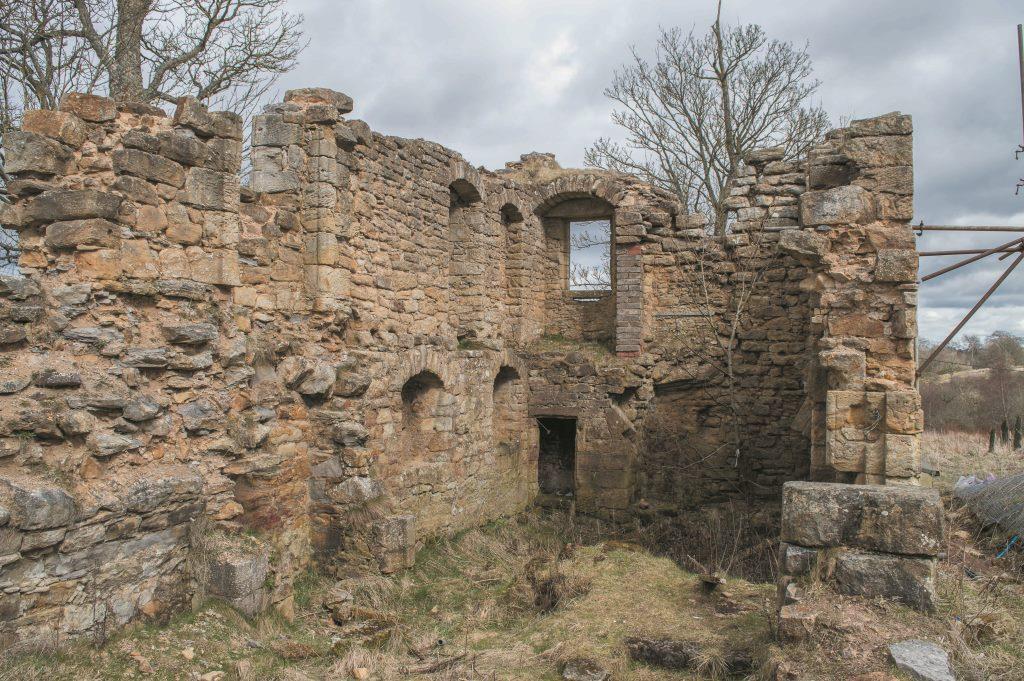 The ruins of Uttershill Castle crown a steep sided hill overlooking the junction of the Black Burn with the River North Esk, just to the south of Penicuik. To the east a smaller burn provides further defence, meaning that he castle could only really be approached with ease from the high ground to the south-east. The principal ruin is that of a rectangular hall-block, with some earthworks beyond. The site is fenced off for safety reasons but easily accessible.

The castle originated as a two storey defended house, of a style commonly called a bastle, late in the 16th century. This building, which had a vaulted basement, would have had a single hall taking up the whole first floor and possibly an attic above. The basement was lit with a single window, and an internal stair led to the first floor. As is common with the type of building, the first floor was also supplied with a vaulted stone roof (protection against fire). The hall was subsequently remodelled with more decorative windows, and the attic was most likely roofed in timber. The house was then extended again, this time to the east with a full height extension. The ground floor of this was the new kitchen, with a chamber above, and the main door was remodelled on the ground floor – previously the entrance may have been at first floor level, the internal stairs leading down to the basement – which was used for keeping livestock safe. A barmkin wall surrounded an associated courtyard, and at least one further building was also present, but these remains are not yet fully excavated.

Uttershill Castle was built by the Penicuik family, of whom very little is known, and in about 1604 passed to the Preston family, who held the castle in 1641, when it was the principal seat of the Barony of Gorton, also known as Preston. George Preston, the first known, was the son of David Preston of Craigmillar. It is not clear when the castle was abandoned, but the lands were sold by 1717 to Sir John Clerk, (perhaps as early as 1704) and Robert Preston of that Ilk moved out in 1719. References to Uttershill are somewhat unclear, but it seems to have remained in use as a farmhouse down to the late 18th century. By the late 19th century it was being used as a gunpowder store and by that date had been in ruins for a considerable time. It is not clear when the south-west wall fell, but a drawing dated 1836 suggests it had already collapsed by this date. The castle was sold on at least twice in the 20th century with a view to restoration, but this does not – on the surface – appear likely to happen any time soon.