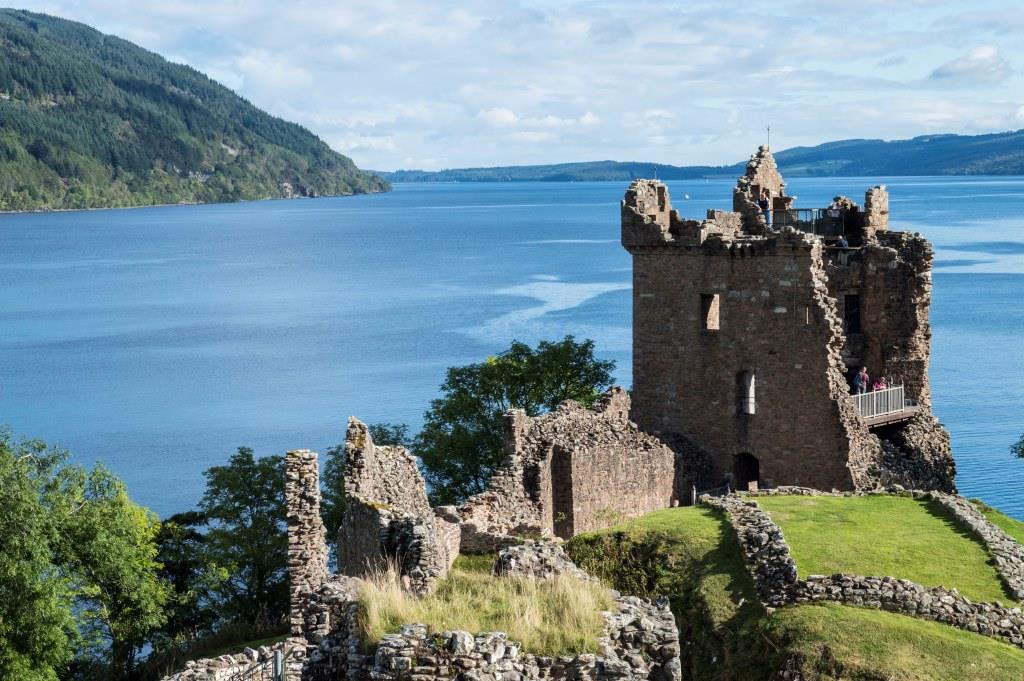 Urquhart Castle, on the shores of Loch Ness has been used as a fortified site for well over a thousand years. It guarded the entrance to Glenmoriston as well as the western shore of Loch Ness and was strategically important as it protected the lowlands of the Moray coast against assault from Argyll and the Isles.

The castle is set on a rocky promontory and is defended by a deep ditch cut across the neck of land. Entering through the medieval gatehouse, the oldest part of the castle is on the higher ground to the right. It is likely that this location was fortified well into antiquity, and pieces of vitrified rock (melted in intense fire) found at Urquhart may represent the drystone walls of this fort, and tell us how it was destroyed.

However this part of the promontory was surrounded by a stone wall in the early 13th century, possibly by the Comyns, who were instrumental in putting down the last of the many rebellions in the north in the late 12th and early 13th century, together with a large tower which was the principal accommodation on the site. Other buildings such as stables and a chapel may also have lined the courtyard, which was probably accessed via a simple gate. The rest of the castle site may have been defended by a secondary timber wall as well as the ditch.

This was replaced with a stone wall and gatehouse in the second half of the 13th century, when the older castle fell into disuse, and the lower ward became the centre of life at the castle. As early as 1230, Urquhart had become one of the many properties held by Sir Alan Durward, a comparative newcomer to Scottish high politics, and whose estates were split up amongst his three daughters when he died in 1275. Urquhart was probably held by the Comyn Earl of Buchan afterwards, until it was destroyed by Robert Bruce in 1307.

At its destruction, Urquhart almost certainly had a tall tower on the site of the present tower house, as well as a range of buildings on the side of the courtyard facing the loch, and a chapel on the high knoll in the centre of the northern ward. To the south, the area was probably taken up with service buildings – stables, granaries, the smithy and so on, with the old castle on the summit used as a watch post, but not really occupied.

Urquhart was one of many properties granted to Thomas Randolph, whom Bruce had made Earl of moray and his deputy in the north, and it was assaulted by the English in 1334. It passed to the hands of the Stewart Earl of Buchan, Alexander, by 1384, who was married to the Countess of Ross, meaning that he controlled the north. When his wife died, however, the Earldom of Ross was claimed by the MacDonald Lord of the Isles, and in 1395 the MacDonalds captured Urquhart, enabling them to significantly increase the severity of their raiding in support of the Ross claim. Urquhart was recaptured and money spent on upgrading it, but it continued to be a target for the MacDonalds through the first half of the 15th century, until James II – probably in frustration as much as anything else, granted it to the MacDonald Earl.

When the Earl was forfeited for treasonably communicating with Edward IV of England, Urquhart was granted to the Earl of Huntly, who leased it to Sir Duncan Grant. Under the Grants order began to return to the area, and a new tower house was built when the Lordship of Urquhart was granted to the Grant family in 1509. This did not, however, prevent the MacDonalds from sacking the castle in the power vacuum that followed the death of James IV and much of the nobility at Flodden in 1513.

Raids into MacDonald land followed, and retaliation was the order of the day. The final “Great Raid” was in 1545, which saw nearly 8500 head of livestock removed from the Urquhart lands. This was, however the last of the raids.
Urquhart next saw action in the Covenanting period, when it was attacked by Covenanters from Inverness in 1644. The castle was again sacked and everything of value removed from it. Seven years later when Cromwell garrisoned Scotland, he chose not to utilise Urquhart, preferring to build new forts at Inverness and Fort William. It was garrisoned in 1689 and briefly besieged by Jacobites, but they were forced to retreat. When the garrison left in 1691, they blew the castle up, ensuring that it was undefendable leaving the castle to decay.

Much of the timber, tiles, and lead was stripped from the castle, meaning that it was open to the elements, and in 1715 parts of the Grant tower collapsed in a violent storm. The castle then remained in a state of decay until bequeathed to the State in 1911, since which Urquhart has undergone a significant program of stabilisation and repair.

The castle is now managed by Historic Scotland, and is probably the most popular tourist destination in the Highlands.