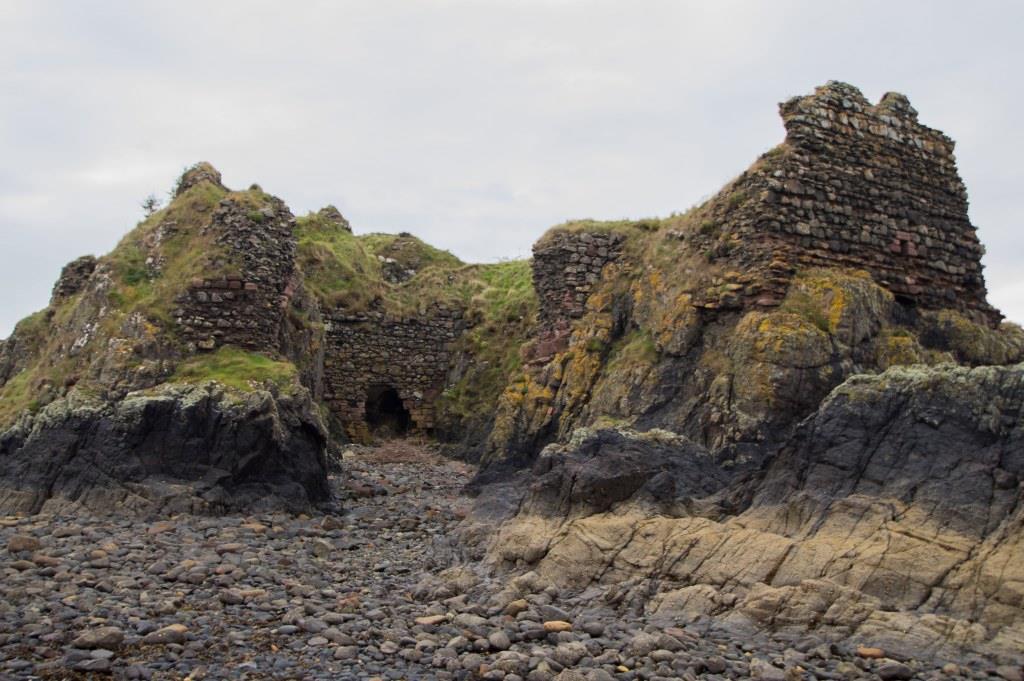 Turnberry Castle occupies a rocky spit of land which now also houses the Turnberry lighthouse, and can be accessed by crossing the Trump Turnberry Golf course. There are a number of sections of ruined wall which indicate that it was once an impressive courtyard castle, and it is best appreciated at low tide, when it is possible to walk out onto the rocks to see the walls.

The castle was probably built in the 13th century and was a property of the Earls of Carrick. This Earldom was formed out of the defunct Lordship of Galloway in the late 12th century, and after two Earls the line ended in Marjorie, Countess of Carrick. In 1271, the widowed Countess married Robert de Bruce of Annandale, and although this angered the King, Bruce was eventually granted the title Earl of Carrick. Their eldest son was to become King Robert I, and it is commonly believed that he was born at the castle. In 1297, during the early Wars of Independence, the castle was burned by William “le Hardi” Douglas. After his coronation and swift exile in 1306, Bruce returned to Scotland in 1307, landing at his former home Turnberry, repaired and reoccupied by the English. He did not succeed n taking it, but forced the garrison to abandon the castle. In 1310 it was slighted on the instructions of Bruce in line with many other castles, but accounts submitted by the Baillie of Carrick between 1326 and 1370 show that it was repaired, with sums in excess of £165 being spent there. Unfortunately the castle does not feature again in records, so we do not know its subsequent history under the Stewarts.

The castle was defended by a substantial curtain wall and ditch across the peninsular, presumably with a gate entered via a wooden bridge across the ditch. There is no evidence of wall towers, but it seems probable that the land-facing wall was supplied with these. As the remains are overgrown with centuries of earth and grass, it is impossible to identify this without field work on the site. The northern end of the ditch was overlooked by the one tower we can be certain of, the large keep. The rest of the peninsular was surrounded by curtain walls which followed the irregular outline of the rocks, here and there bridging awkward inlets instead. There was at least one sea gate, defended by a large portcullis, and it was through this gate that Bruce entered the castle in 1307. The sea gate leads to a badly ruined vault forming the basement of the keep, and was supplied with stairs leading up to an enclosed courtyard. An eroded cave in the rocks may have been a second sea gate. Today this leads to what may have been another covered vault, or else the castle dock. There is no evidence to suggest there was permanent access to this area from the castle, so if this cave existed in the 13th century, access to the dock would probably have been by removable ladders! The irregularly shaped outer ward is largely destroyed and is occupied by the Turnberry lighthouse installation.

Although access is possible to Turnberry Castle today across the golf course, it is not signposted. The site is dangerous, particularly in the wet, and there are no safety fences. Access to the keep and sea gate area in particular is somewhat tricky, with steep narrow tracks in the grass. Work was carried out by the RCAHMS in 2014, but the results are as yet not available to the public.