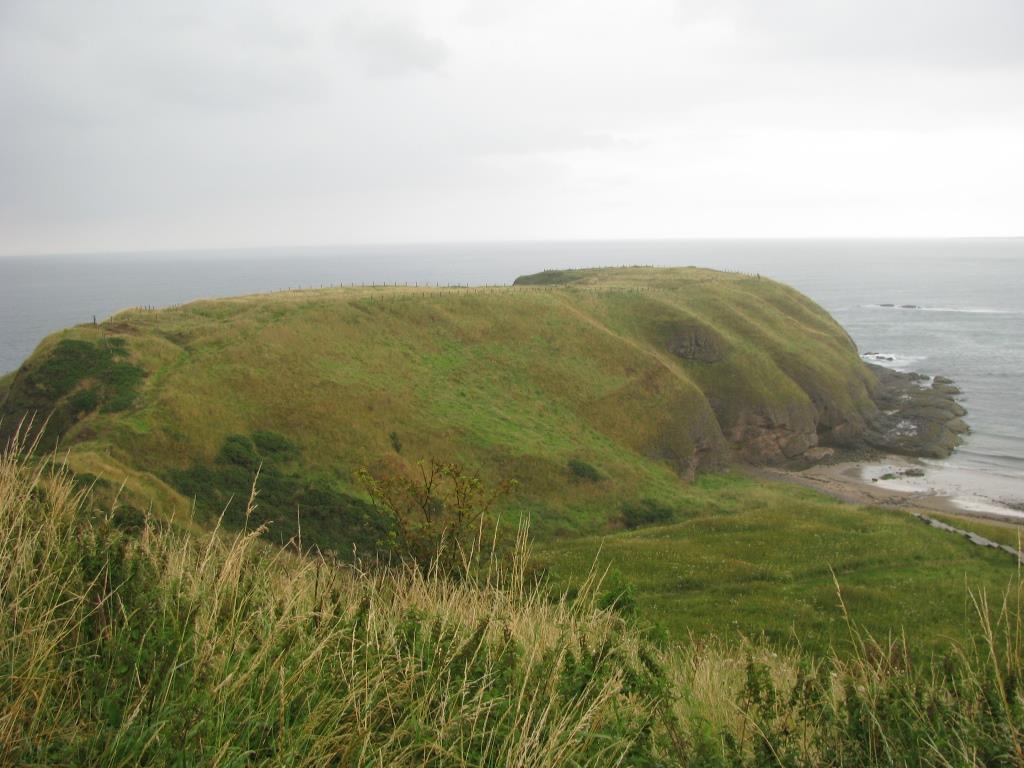 Troup Castle was built to guard the promontory known as Castle Point overlooking Cullykhan Bay on the north Aberdeenshire coast a short distance west of the fishing village of Pennan. The promontory is accessible on foot and there is a car park, but there are no paths and footing can be slippery. Safety fences prevent approaching the cliff edge too closely.

On a small section of the promontory outside the medieval defences referred to as The Knoll was an iron age fort defended by timber laced ramparts and a wooden gate tower which was destroyed by fire and became vitrified. It is possible that the defences extended across the full width of the promontory, but there are no signs of this surviving. This site may have been reoccupied in the post-Roman period, and then abandoned. Excavation has produced pottery of late 12th century date on the Knoll which suggests that it may have served for a short period of time as a motte-type fortification. To the east of this, and occupying the narrow neck of land separating the main part of the promontory from the mainland, are the footings of a small rectangular tower and a further building to the south-east. This small fortified site has been suggested to date to the 13th century and if so may have been a replacement for the earlier structure on The Knoll. Unfortunately the majority of the archaeological focus has been the earlier site, meaning that comparatively little information is to be had about the castle itself. The building to the east of the tower remained in use in to the 16th century, when it had been converted into a kitchen. It seems likely this is the building depicted by Pont on his map of Buchan as “Trouyp” consisting of a simple four storey tower with a ditch – the kitchen building would have been to the rear.

Troup Castle on the Knoll lay within the borders of Buchan, a province completely wasted by Robert the Bruce, and all castles were destroyed at this time. Presumably it dated to the time of King William at the latest, and to his campaigns in the north against the rebel MacWilliams which led in the end to bringing the north of Scotland under the secure rule of his son Alexander II. Hamelin de Troup and his son of the same name, are known from the 1290s and Hamelin junior complained about attacks by Duncan de Frendraught on his lands in 1304-5. It was probably this Hamelin who was accused of (and acquitted) of treason in Bruce’s “Black Parliament” of 1320, and he may have been the same individual who was sheriff of Banff in 1328. It is curious to note that the widow of Hamelin de Troup whose husband had “lately died in his service in Scotland” was granted a pension by Edward III on February 24th, 1338 – and therefore had abandoned the cause of David II. This may have been at the battle of Culblean, or on one of Edward’s various raids across northern Scotland at this time. A few years later, David II granted the barony of Troup to his servant Andrew Buttergask, but it is not clear how long Andrew held the estate. It was certainly not very long as he was killed in the battle of Neville’s Cross in 1346. What happened to Troup then is not clear. It next appears as being a possession of Robert Keith the Marischal, who married the heiress of the barony (perhaps Andrew Buttergask’s daughter, unless the barony had been granted elsewhere by Robert II), and granted Troup to his younger son, John.

Subsequently the lands passed between different members of the Keith family; William Keith of Troup (son of the 2nd Earl Marischal) was killed at Flodden in 1513, and was followed by his brother Gilbert, who died in 1537; and an Alexander Keith of Troup, son of the 3rd Earl Marischal, was followed by his son Gilbert. Troup remained a Keith property until 1632, when the lands (with some exceptions) were granted to Sir James Gordon of Lesmoir. There was no mention of a tower or fortalice in the grant, suggesting that it may have been retained by the Keiths, or was already ruined. In the mid 17th century the estate was purchased by Major Alexander Garden, and shortly afterwards he erected a new house for himself. The creation of a coastal battery on the promontory known as Fort Fiddes (named after the engineer who built it) in the late 17th, or 18th century was carried out at the expense of the Garden laird of Troup, which indicates that if the old tower of Troup Castle was retained by the Keiths for a while, it had since been sold and was probably demolished by the Gardens to provide building materials for the battery.