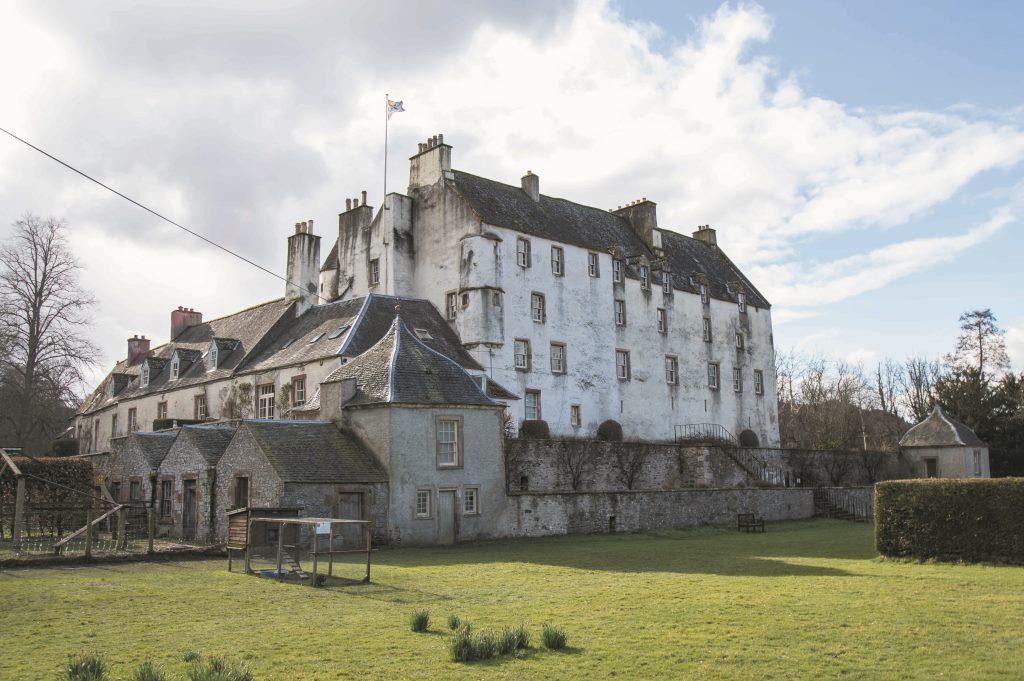 Traquair House can be found to the south of the village of Innerleithen in the Scottish Borders, overlooking the junction of the Quair Water with the Tweed, as well as the wide haughlands towards the mouth of the Leithen Water just across the Tweed. It is not an obviously defensive site as it also sits on the haugh land and is overlooked by higher ground, but the area was probably marshy in medieval times and has strategic significance.

It is described as Scotland’s “oldest inhabited house”, but as the oldest parts of the house date to the 15th century, this is perhaps misleading. The claim comes from the suggestion that the early Kings of Scots had a hunting lodge at Traquair in the 12th century. However, since this building was undoubtedly made of wood, none of it survives today, and there is no evidence of earthworks which would suggest that the site was fortified, despite its strategic location. Traquair was maintained as royal forest along with Selkirk forest into the late 13th century, and in 1292 Edward I made William Comyn the keeper under the same terms as the former keeper, Simon Fraser. It is likely that within Traquair forest a number of small dwellings were maintained as hunting lodges for the kings of Scots, and there are a number of earthworks in the vicinity which may have been used for this purpose. The lands of Traquair were within the extensive tract of land granted to James Douglas by Robert Bruce, but remained within the conflict zone and were granted to Aymer de Valence by Edward I in 1306. Later they appear to have been granted to the Maitlands by David II, and they appear as Maitland territory in 1358 and 1392. Passing through the hands of the Watsons of Cranstoun and the Murrays, it was forfeited in 1464 and granted to the Douglases of Cluny, and at an unknown date to Lord Boyd, himself forfeited in 1479. After this, King James III granted Traquair to the Earl of Buchan, who then passed it to his second son James, the first of the Stewarts of Traquair soon after 1492. It was James Stewart who erected the first fortified house at Traquair, a  standalone “great tower” of three storeys and an attic, albeit of modest proportions. This tower was entered at ground floor level and a mural stair led to the first floor hall. The basement was vaulted with a single window, and the hall was provided with a mural chamber. In the mid 16th century this was extended substantially to the south with a long block of three vaulted basements and a square stair tower; a narrow corridor extended along the front linking the two parts of the building. Later in the 16th century the south wall of the hall was removed to form a larger great hall, probably at the same time that a further extension to the south was added, although it may have been when the whole building was raised by a storey in 1642. By 1694 the courtyard (probably dating to the 16th century) had been lined with buildings as well to form the layout we see today, although the inside continued to be remodelled.

James Stewart of Traquair was killed at the battle of Flodden in 1513 and was followed by his son William. Rather unusually, William was followed by all four of his sons in succession, Robert, John, William and James. Robert only held the lands briefly and died in 1548. John was a strong supporter of Queen Mary, William a gentleman of the bedchamber for James VI, and James was elderly when he succeeded in 1604, dying in 1606 to be succeeded by his grandson John. It is not clear which of the brothers extended the house. In 1628 John became the first Lord Traquair, and was elevated to be Earl of Traquair at the coronation of Charles I in 1633. Accused of treason in 1641, he was pardoned by the king, but the estates had already been forfeited, and he went to exile in England, ending up in prison at Warwick Castle until 1652, when he was allowed to return to Scotland, but not his estates. His son John was also a hardened royalist, and fought at both Philiphaugh and Preston for the king. He survived to see the Restoration of Charles II, and was followed by his sons William in 1666, and Charles in 1673, Charles and his son were both Jacobites, the elder imprisoned in 1692 and 1708 and the younger after the 1745 rising. Through all this time, Traquair avoided damage by assault, and appears to have avoided attack. The Earldom became extinct in 1861 with the death of the 8th Earl, last of the direct male line. Today the estate is held by the Maxwell Stuart family, who were the next to inherit after the death of Louisa Stuart, sister of the last earl, in 1776. Traquair House is open to the public and a popular tourist destination.