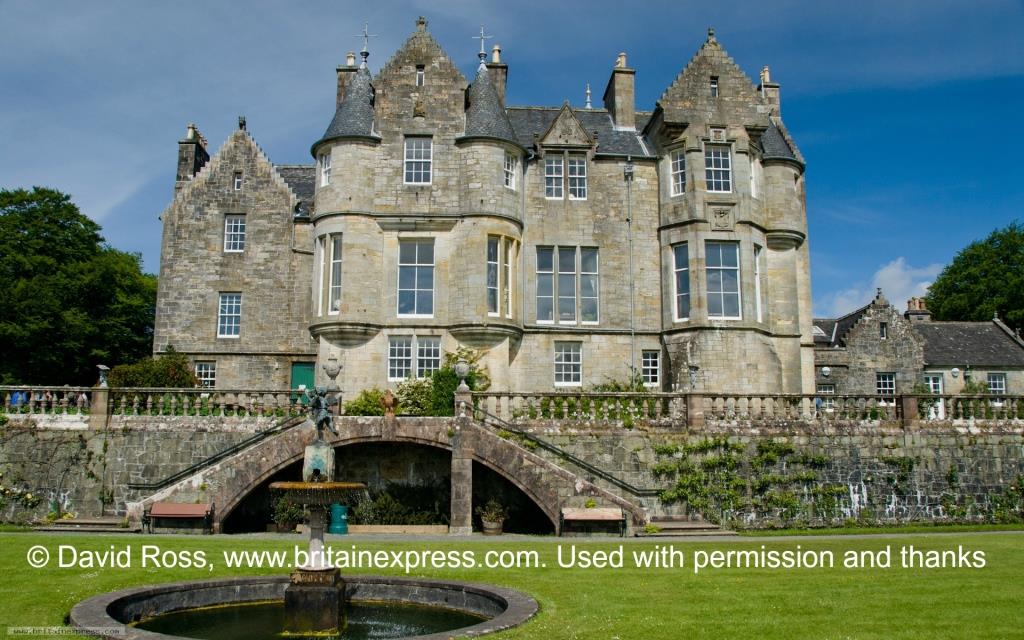 Torosay Castle is a 19th century Baronial mansion completed in 1858 for John Campbell of Possil by David Bryce, now found within 12 acres of landscaped gardens. It is built on the end of a ridge between a small burn and the sea, and overlooks Duart Bay.

The lands of Torosay were originally granted to the Abbey of Iona, but passed to the Maclean family of Duart after the Reformation. At the end of the 17th century the lands were forfeited, and granted to the Earl of Argyll. Shortly afterwards the Earls built a house at Achnacroish, overlooking the bay, and also built a farmsteading to serve the house.

In the 1820s the rest of the lands of Torosay had been sold, but the Campbells who retained ownership of Achnacroish decided that a new house more in line with the family ambition should be erected, and the old house was demolished. The new house was built in the style of French chateau, and was named Duart House. Following the reduction of the Campbell fortune during the American Civil War, John Campbell was forced to consider selling the 14,000 acre estate.

In 1865 the Duart House estate was sold to Charles Guthrie, and after the sale of Guthrie Castle, Torosay was considered to be the Guthrie clan seat. A further 10,000 acres were added to the estate with the acquisition of two farms in 1867. However his nephew Murray, who inherited the estate in 1897 was not interested in the estate, and promptly put it on the market – until he visited Duart House and chose to keep it.

Part of the estate was the ruined Duart Castle, and following the sale of the ruins to Sir Fitzroy Maclean by Murray’s widow, Duart House was renamed Torosay, allowing the Macleans sole ownership of the name Duart. Olive Guthrie also separated the house from much of the estate, making over the estate to her family whilst living in Torosay Castle.

Unfortunately Olive was unable to maintain the house, and when her son arrived to take over in 1946, he found it in a poor state. An attempt to convert it into a hotel was not a success, and eventually the house and gardens were opened to the public. This continued to be the case until 2012, when Torosay was sold to an overseas buyer. Since that date the gates have remained firmly closed.