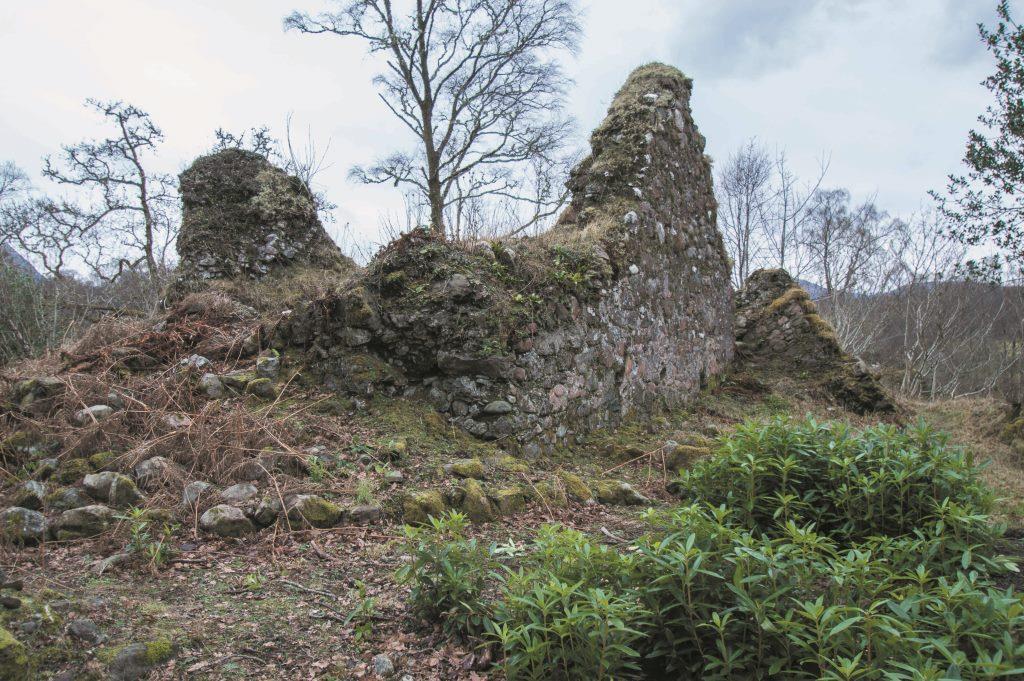 Torcastle occupies a rocky knoll at the edge of a piece of land which is now situated between the Caledonian Canal and the River Lochy a short distance to the north of Fort William. Before the construction of the canal the knoll with adjacent lowlands was situated overlooking the junction of a minor burn with the Lochy, and was surrounded on three sides by the river. Immediately to the north a pond may represent a wet moat which would have turned Torcastle into an island castle. The castle guarded access to the Great Glen and the main route from Argyll and the west coast to Inverness, so was extremely important strategically.

The remains are easily described. They consist of two sides of a rectangular tower on the headland overlooking the river, and one or two fragments of walling to the north which probably represent a courtyard of some description. These indicate the tower was about 12 metres by 9, with walls over 2 metres thick. The tower has been robbed of masonry and efforts were made in the 19th century to romanticise the ruins which have obscured understanding the remains. However it appears possible that a winding stair served all floors, and that the tower contained mural chambers within the thickness of the walls. In addition there are suggestions of a ditch in places to the north of what is believed to have been the courtyard area. There is no evidence the the tower was vaulted – or of joists – in the surviving masonry. Overall the impression is of a small and spartan castle of the tower and courtyard type, but this may be a result of the denuded remains.

According to tradition, the crag was occupied by a vitrified fort, and archaeology carried out in 2015 was able to confirm that vitrified material was built into the castle walls, along with “underlying structural features” which appear to support this tradition. However, the traditions that the site was used by Banquo, thane of Lochaber, and that Torcastle was built in the 11th century by Gillicattan Mor, chief of Clan Chattan, are less rooted in fact. Lochaber was a region long outside the aegis of the Kings of Scots, and does not appear in records until the mid 13th century, when it was first granted as a lordship to the Comyns. It does appear likely that members of the Chattan kindred did occupy the lands at this time, and as subordinates of the Comyns, but it is impossible to tell, since so much of the early stories about the highland clans were not recorded until the 16th century. It is believed that the lands around Torcastle passed by marriage to the Mackintoshes in 1292, but as this is associated with a tradition about the transfer of chieftaincy, this too may be later fabrication.

In fact, there is no record relating to this area at all prior to the 1394 grant of John Macdonald, Lord of the Isles, to Alastair Carrach, who is believed to have built the tower, which appears to be roughly of this period. Lochaber as a whole was granted by Robert Bruce to Angus Og Macdonald, whose descendants dominated the area for some 200 years, confirmed in possession by English and Scots. The lands described were “the lands beyond the Lochy, Mamore and Glenspean”, and were divided between Alastair Carrach’s sons – it is not clear to which of his sons Torcastle itself passed, although the Keppoch line would seem likely. In the mid 15th century Alexander, Lord of the Isles, granted many lands in Lochaber to the Mackintoshes, the chief of whom he made his baillie in Lochaber. Eventually the Macdonalds were overthrown, and in their place the Earl of Huntly was made Lord of Lochaber – the Mackintoshes simply transferred their allegiance to Huntly. In 1528 the Mackintoshes eventually lost their lands to the Camerons, who were chartered in the former Chattan lands by James V; a condition of the grant was to build domestic buildings such as a hall, kitchen, doocot and offices along with development of the land as policies. Torcastle then remained the seat of the chiefs of the Camerons until 1665, and it is possible his son remained here until after the battle of Culloden. It was certainly abandoned soon afterwards.

In order to reach the castle today, it is necessary to ask permission of the Torcastle bed and breakfast, whose gardens need to be crossed – unless one is inclined to wade along the river!