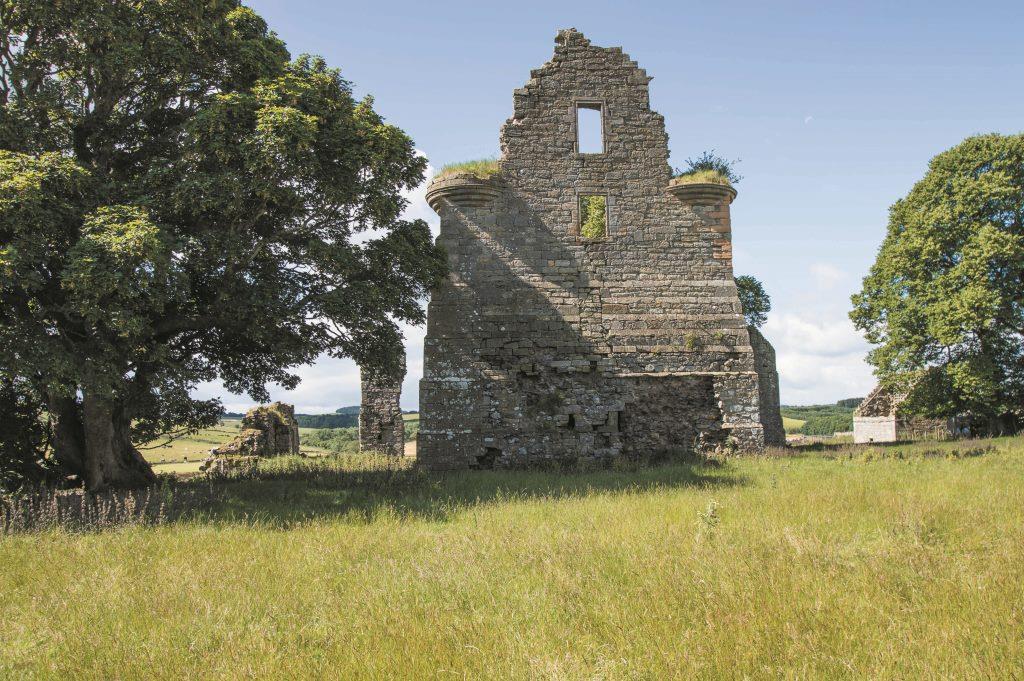 Struthers Castle is to be found adjacent to the farm of the same name in the hills to the south of Cupar in Fife. The site is on high ground between the valleys of the Craigrothie Burn and the Glassy How Burn. It does not appear to be defensively strong or of particular strategic significance, although it did lie adjacent to an old road which ran through the hills from St Andrews towards Kirkcaldy (now largely vanished, the route can be seen on Roy’s 18th century map).

There is not sufficient evidence today to follow what layout Struthers Castle originally took, and even MacGibbon and Ross’ plan and drawings are unclear from the late 19th century. The principal remains are those of a substantial gable end, described as being provided with large buttresses tapering as they rise, which are crowned with open round bartizans, and an L-shaped section of walling constituting a south gable and a west wall, provided with large windows. In addition is a doocot to the north-west, near which is a free-standing buttress, and in association with this are some incomprehensible grassed-over footings. However, the description of the gable is inaccurate, since the external facing has also been provided with a full width “buttress” of five steps, and the external face of the ruined south wall adjacent to this gable is stepped in at second floor level. Inside the gable itself shows a narrower wall at second floor level, and the first floor window has clearly been blocked up from the outside; as have the narrow slit window and another opening at basement level. The stone has been extensively robbed inside which makes further analysis difficult, but it looks to me as if the gable has been repaired and did not originally have the stepped buttresses at all. The ruined section to the west is shown to better effect by MacGibbon and Ross, who show that the building here was a tall three storey house with arched windows, above which were panels – however the gable has largely fallen, as have the arches. The reason for the standalone buttress is not clear, and is mentioned by M&R, who describe a range of buildings extending to this area with a vaulted corridor. Clearly Struthers Castle was a dwelling of some size and grandeur, but the nature of the building is hard to understand.

The lands of Auchterstruther were held in barony by Randolph de Auchterstruther in 1124, but probably passed to the Fraser family soon after this. Andrew Fraser is recorded as holding lands in Fife in 1296, held of Ada de Valognes, whose family had held lands in barony centred on the Dalginch area since the 12th century, possibly from the Earl of Fife. In 1306, Thomas de Grey petitioned Edward I for the lands of Andrew Fraser, including those of “Ugtretherestrother”, which suggests that Struthers may have been part of this holding. By the 1370s they had passed with marriage to the Keith family. An undated charter which must be of this period relates that William de Keith chartered William Lindsay and his wife Christian in the lands of Auchterstruther, in exchange for the lands of Dunottar. On 1st July 1373, Walter, Bishop of St Andrews, issued a document of infefment to Lord William Lindsay of Byres and his wife Christian of “all the lands of Auchterstruther and the castle thereof” which had been resigned by William de Keith. This shows us that there was a castle at Struthers in the late 14th century, and that the Earls of Fife (whose male line had ended in 1353) were no longer feudal superiors of the lands. A further document dated 20th October 1380 records that William Keith and his wife Margaret Fraser granted the lands of Auchterstruther to their son Robert, so it is not particularly clear exactly what was happening to the lands at this point, however it is clear that ultimately the Lindsays held Auchterstruther from the late 14th century onwards.

As the seat of one of the principal estates of the Lindsays, who became Lords Lindsay of the Byres, Struthers Castle was presumably in regular use at this time, and remained so until the mid 17th century when John Lindsay succeeded as the 17th Earl of Crawford. Although there was a castle mentioned in 1373 which was built by the Frasers, it is the Lindsays who were responsible for the majority of the structure depicted by MacGibbon and Ross. It is to be expected that the Fraser castle consisted of a tower-keep and probably an attached courtyard, but this is not to be made out today unless the thick east gable belongs to this date and has been substantially remodelled with the “buttressing”- which is possible. This would suggest that the standalone buttress, which measures over two metres square, may be part of an old courtyard wall. The presence of a well outside this point seems to indicate that the courtyard area extended further to the west – or even that this was the location of the tower-keep with the well inside. In either case, there is no real evidence in the surviving remains that can clearly be interpreted to date from this period without formal assessment of the core mortar, for example. It is possible that the castle was damaged or destroyed in the 1450s during the civil war between the Crown and the Douglases, but if so, this is not recorded. Similarly the Lindsays of the Byres were active politically throughout the Reformation period, and the castle may have been sacked at that time. In his 17th century “History”, Sir Robert Sibbald describes Struthers as “a large old house” and there is no indication that it retained the “towers and battlements” suggested in Leighton’s “History of Fife”. It is possible that by this time the tower-keep had been remodelled into a newer tower house and courtyard, and that the buttressed sections were architectural novelties created out of a need to incorporate parts of the old castle into the newer design. The 10th Lord Lindsay succeeded in 1616 to his estate, and it seems probably that he was responsible for a further redesign of Struthers Castle, including enlarging windows (according to MacGibbon and Ross’ assessment of the large and now fallen arched windows) and creating substantial formal gardens – either at this date, perhaps after his elevation to be Earl of Lindsay in 1633, or even after his succession to the earldom of Crawford in 1644. It may be that the castle had been damaged during the 1640s and was rebuilt then, but this seems unlikely given the description of the house as “old” by Sibbald towards the end of the 17th century, and the image of it as a castle with two crenellated towers and a courtyard shown by John Adair in 1684. It seems most likely that Struthers Castle was abandoned in the first half of the 18th century and a new more appropriate house built on the site, and in 1833 it passed to George Boyle, the 4th Earl of Glasgow. It is likely that the castle was largely demolished in this period. Today it remains within the bounds of Struthers farm, in a field sometimes used by livestock.