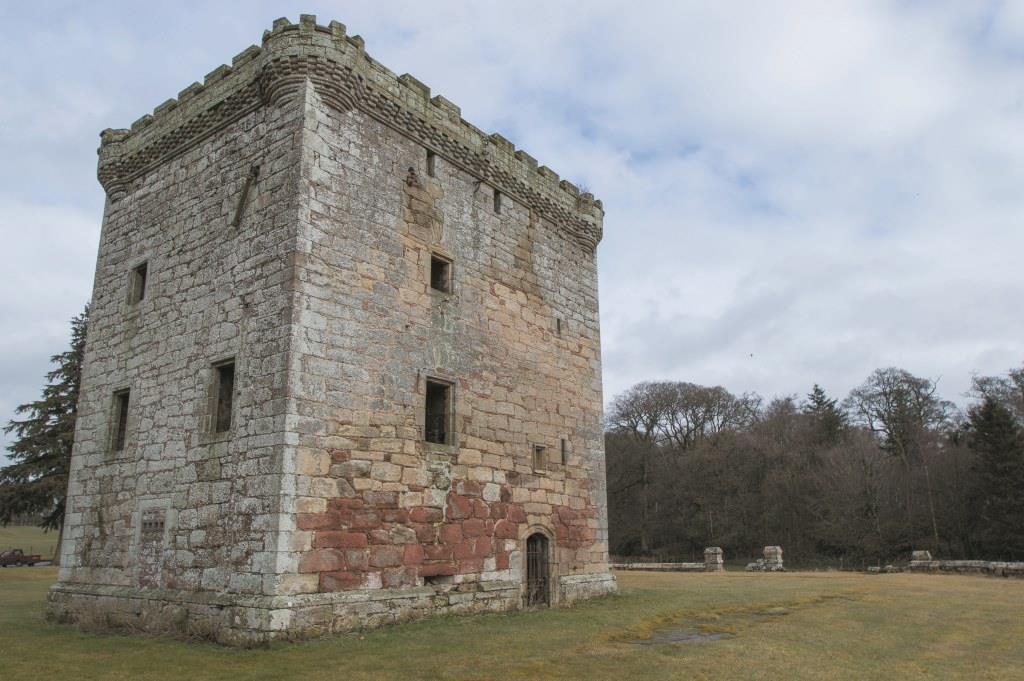 Stapleton Tower is a ruined tower house standing on its own within a private garden, although it is visible from the road. It is situated a few miles north-east of Annan on fertile ground which slopes gently to the south towards the Solway Firth coast. There are no obvious reasons for siting a tower here, which indicates that despite its location so close to the English border it was primarily residential in nature. However old maps do show that minor watercourses existed to the east and west, joining south of the tower, and that to the south it was quite marshy, so access was probably awkward in this landscape – but not impossible.

The tower is a simple rectangular building of three storeys and an attic, and sports a restored corbelled parapet with open rounds. The entrance is on the ground floor at the eastern end of the south wall, and the arched doorway (defended by a single shot hole) opens into a small lobby held within the thickness of the wall leading to both the vaulted basement and the winding stair in the south-east corner, which projects into the accommodation space within. Above the doorway is an empty space for a heraldic panel. The tower measures about 11 metres by about 8.25, with walls that average about 1.75 metres thick at the bottom. The basement is a single barrel vaulted room and probably had four splayed shot holes originally, although two of these have been widened to form windows and a third has been blocked up. Externally the tower has a plinth at the bottom. The first floor was originally the hall, as was usually the case, and the fireplace was in the west gable. There were windows in the north and south sides, and possibly in the gables as well, although these may have been widened – at the east gable end is a blocked up doorway which led into a now-demolished mansion. The second floor was originally a single room as well, later subdivided, and at this point a second fireplace was added. The stair climbed up to the attic level, of which nothing survives save a small window opening, and a separate stair rose through 90 degrees to access the parapet via the south-eastern wall.

The lands of Stapleton were granted to Robert de Crosby between 1211 and 1233 by Robert Bruce, Lord of Annandale, and he was given permission to create a deer park in them. What happened to them next is not known; they are sometimes believed to have been associated with the lands of Newbie, but as this is on the opposite side of Annan, this appears unlikely to me. The Crosby family continued to be landholders of the Bruces and appear as witnesses on their documents until the late 13th century, another of their holdings being at Cummertrees, further to the west of Annan than Newbie, although they swapped this for Gretna between 1245 and 1285. Crosby is in Cumbria, near Maryport, and it seems quite possible that the family were eventually dispossessed for choosing support of the English over Bruce, although their fate isnt actually known. In the 15th century Stapleton was held by the Corrie family of Newbie, which had previously been held by the Carlyle family since early in the 14th century, Robert Bruce granting them out according to the Scots Peerage – although no record of this is preserved in documentary form.In 1489 Stapleton was resigned by Thomas Corrie and regranted to his son Herbert and wife. This grant refers to the £5 land of “Stapiltoun”. The village of Stapleton was destroyed by the English in 1514, and passed among members of the Corrie family until 1536, when they were sold as part of the Lordship of Newbie to William Johnston of Gretna, who then alienated Stapleton to Christopher Irving of Bonshaw later that year. In 1566, the “ten pound land of “Stabletoun” was held by the Irvings from the Johnstons, but there is no mention of the tower at this date.

Stapleton Tower first appears on Ponts map of Annandale, but not on Aglionby’s Platte, suggesting it was probably built c1590-c1595. After the death of Edward Irving of Bonshaw in 1622, Stapleton was acquired by Fergus Graham of Blawatwood, despite claims to it by Edward’s sons Christopher and John. In January 1626, the Irving brothers forcibly took possession of Stapleton and prepared to defend their prize. The Commissioners of the Middle Shires were instructed by the Privy Council to take it from the Irvings but failed to do so despite apparently attempting to do so on three separate occasions. In the end, the Privy Council instructed the Earls of Nithsdale, Roxburgh, Buccleuch and Annandale, two lords and ten knights to lead their men against “Christie Irving” and take Stapleton Tower from him. This succeeded, but I suspect Irving may have continued to harass Graham, as less than five months later Stapleton was granted to William Irving of Bonshaw. By 1636 Stapleton was in the hands of the Johsntons of Raecleugh, and a family of Irvings moved in as tenants, remaining so until they obtained possession of the property between 1676 and 1684. By this time there were a number of buildings – or extensions – associated with Stapleton, which was assessed as having nine fireplaces despite the tower itself possessing only five. In 1695 Irving of Stapleton was an exiled rebel in France indicted for treason, and it seems probable that he was forfeited, allowing Stapleton Tower with its lands to revert to the Johnstons, nor Marquesses of Annandale. Stapleton Tower appears on Roys map of c1750 as “Stapleton Castle” and is shown within three enclosed areas forming a “7” shape. The enclosure at the angle was irregularly shaped, with three long buildings in the corner. In this area, adjacent to the enclosure to the top left is also a single, larger, rectangular building; both the other enclosures are empty of buildings. Comparison with the earliest Ordnance Survey, which often preserves field boundaries shown in Roy, it is not possible to see which building the tower was represented by, although I would have to suspect it is the larger one.

By the early 19th century the tower had been uninhabited for some time and was becoming ruinous; and in 1823 a drawing was made of it which shows that the caphouse and parapet had been lost. Stapleton Tower was purchased by the Critchley family who incorporated it into a large and rambling castellated baronial mansion to the north and east. A photograph of “Stapleton Towers” can be found online, and it is depicted on the Ordnance Survey in this form. Eventually this was abandoned, and the mansion was demolished, leaving the tower to stand alone again. Today, a modern house has been built close to the tower to the south-west, and the tower is part of the gardens associated with this house, although the exact boundary is unclear. The tower doorway is blocked by a modern metal gate, which is locked, but it is possible to see a handsome tiled floor was installed in it when the mansion was added through the gate.