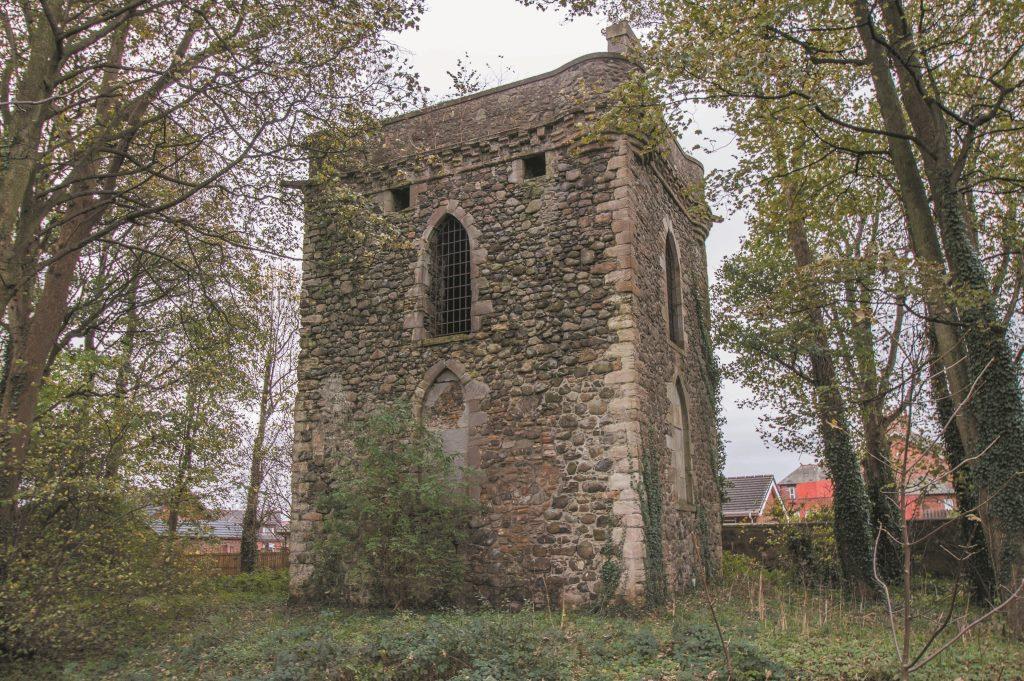 Stanecastle is a standalone rectangular tower within a small but largely overgrown park area just off the roundabout of the same name on the outskirts of Irvine in Ayrshire. The area is accessible through gates which are probably locked outside of daylight hours. The tower has been restored but is not occupied, and there is no access to the inside today. It has clearly been altered on more than one occasion, and there appears to be no real defensive reason to have erected a tower at this location. However examination of the contours suggest that at one point the Red Burn may have been a more notable watercourse than today, and that another, smaller burn may have once flowed through a dip in the ground to the south-west. In addition a depression in the ground to the west may indicate an earlier marshy area.

However, the site is not strongly defensive, meaning that the location must have been chosen for other reasons. The lands of Stane are first mentioned in a court case of 1417, when they were in the hands of “William Frawncies”, a member of the Francis family who were fairly well connected locally at the time, and who was arguing with the burgh of Irvine over rights to a piece of muirland. It may have been his grand-daughter Elizabeth, daughter of Robert Francis, who married William Montgomery of Greenfield in 1508 as the heiress to the estate. William was the second son of Hugh Montgomery, 1st Earl of Eglinton, and in the agreement between Eglinton and Stane concerning the marriage, if William did not marry her, Hugh, another son of the earl, would do so. Clearly Eglinton was intent on acquiring the estate into the family somehow! William was given permission by James V to absent himself from war in 1530 on account of his age and infirmity if he sent his son in his stead. William sent letters to the Earl of Eglinton in June 1542, which is the last we hear of him, and he was succeeded by his son Arthur at an unknown date between this and 1546. It is likely that William Montgomery was responsible for the building of the tower of Stanecastle, but there are no records to confirm this. Arthur was married twice, and from his first marriage to Lucy Cairns of Dreghorn came his son John. However he later “put Lucy away” and remarried, leaving John to inherit Dreghorn only. His second wife was the daughter of the laird of Fairlie, and according to some sources their marriage produced Hugh, the third Montgomery laird of Stane. Other sources state that the younger Hugh was Arthur’s brother. Hugh’s wife was Margaret Montgomery, a daughter of the 2nd Earl of Eglinton, and they had no children, allowing Stane to be claimed by Eglinton, date unknown. This marriage probably took place after 1555; the 2nd Earl was married in 1550, and Margaret was the fifth child of the marriage.

After this the family histories of the Montgomeries fall silent about the Montgomeries of Stane, and we are reliant upon Paterson’s “History of the Countiy of Ayr” – which is frustratingly light on references. According to Paterson, Hugh last appears on record in 1570, when he sold the estate of Stane to Hugh, 3rd Earl of Eglinton, and a document of 1574 makes reference to James Blair, husband of Margaret Montgomerie, Lady Stane, suggesting that Hugh had died. Paterson states that there was a son, Hugh, who was first known as “of Stane” and later “of Auchinhood” and “of Bowhouse” – and suggests that there may have been a wadset involved in the sale to Eglinton, so he is clearly fairly vague on the details here. In any case, in June 1575, the witnesses to a contract include “Thomas Montgomerie, brother of John Montgomerie of Stane” which show that regardless of any son Hugh, the lands had passed to a new owner. I have struggled to find records of the brothers Thomas and John Montgomerie outside of this document, and I have to assume that the lands were granted by the Eglintons to a junior branch of the family – or John and Thomas were illegitimate sons of the Earl.

We do not know what happened to the lands subsequently. In a document of 1665, a ratification was issued to James Dickson of Stane in which Charles II confirmed a resignation by Lindsay of Covington and disposition to Dickson dated 20th May 1658 of all the “rights and superiority of the lands of Stane (with tour)” – but this refers to Stane in Lanarkshire. The next appearsnce of Stanecastle is in the mid 18th century when it was reduced to the single tower and kept in repair by the Earls of Eglinton, who still seem to own the tower.

The tower is rectangular, and measures about 8 metres by 9.5 four storeys high, with walls that are about 1.4 metres thick. It was entered through a doorway at the eastern end of the south side, which is about 2.5 metres above ground level. It has a winding stair in the north-east corner, which serves all floors save the vaulted basement, which must have been accessed through a trap door. The doorway, like the few original windows, has been blocked up, as have the large arched windows which were inserted into the centre of the first floor on all four sides of the tower. The matching arched windows on the second floor are blocked with metal grilles. The hall on the first floor was originally provided with a small window facing north-west and one facing south-east; the second floor had a small window above the doorway which must be from a mural chamber. The interior of the tower was inaccessible even at the time of MacGibbon and Ross, who rightly highlight that any interior features of interest, such as fireplaces, would have been destroyed by the insertion of the large windows. Upper floors were supported on joists, and the third floor was at least partially housed in the attic. The parapet is supported on machicolate-styled corbels and – along with the open bartizans, are comparitively recent, probably late 18th or early 19th century. The attic level is entirely 19th century, and can barely be seen from the ground. An eroded square armorial panel, purportedly displaying the Eglinton arms, has been inserted in between the two large windows in the south-west gable. There does seem to be the curve of a shield on the bottom right hand side, suggesting it is placed correctly, and not upside-down as MacGibbon and Ross say. Instead it appears to be in mirror image, with the roundels in the bottom right rather than the bottom left. I have no explanation for this.

The castle of Eglinton is only a mile and a half from here, and although it may be the case that Stanecastle served as a residence for sons of the earls, it was clearly of secondary importance. It was probably only ever a standalone tower, although there would have been domestic buildings outside associated with it, but no work has ever been done on the site to investigate what the castle was originally surrounded by. The undergrowth in the area includes very impressive brambles – and the ground is uneven, so care should be taken when visiting.