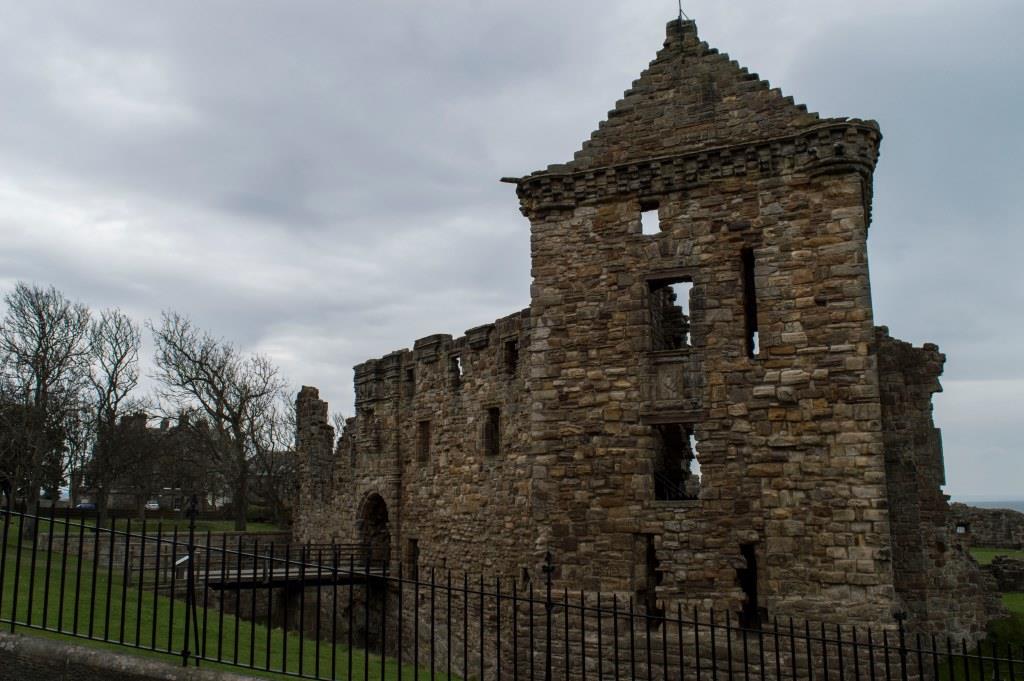 St Andrews Castle is a large ruined courtyard castle on a coastal site to the north of the Cathedral city of St Andrews. The headland is over 15 metres above sea level, and the castle was once defended on the other sides by a substantial ditch. It was the principal residence of the Bishops of St Andrews from the 13th century, and today is managed by Historic Scotland and open all the year round.

The castle was founded in about 1200 by Bishop Roger Beaumont, and was occupied by the English for about ten years during the Wars of Independence. Shortly after the Battle of Bannockburn, it was repaired by Bishop Lamberton – presumably having been dismantled on Bruce’s orders. It fell to the English again, and to prevent reuse it was completely destroyed by the Regent Andrew Murray following a successful three week siege.

The ruins that we see today, then, seem likely to date from the late 14th century at the earliest, when the castle was rebuilt “from the foundation” by Bishop Walter Trail. This was a five sided courtyard, with angled towers at each of the seaward corners, and a gate tower at the corner facing the town. The eastern side of the castle has largely been swallowed by coastal erosion. Ranges of buildings were built along at least four of the sides of the courtyard. Presumably towers also existed at the other two corners, but these were removed when the castle was strengthened with the addition of two round blockhouses by Cardinal Beaton in the 1540s, (now demolished).

St Andrews Castle was the site of Beaton’s assassination in 1546. Following this, his murderers were besieged in the castle for over a year, supported by such worthies as John Knox, who gloried in the removal of the Popes most senior supporter in Scotland. An interesting feature of the site today is the surviving tunnel made in an attempt to break into the castle, and that by the defenders to capture the tunnel of the besiegers.

The castle was then assaulted by French warships in support of the Regent, breaching the castle walls, and allowing French soldiers to pillage the site. A new range of buildings was erected on the outside of the south-west part of the courtyard, including the creation of a new monumental entrance to replace the old entrance in a square gate-tower in the centre of the curtain wall. The castle was used by successive Bishops and the Crown, but by the mid 17th century had become a source of stone to repair the harbour walls. In 1801, the Great Hall along the eastern side of the castle fell into the sea, and erosion continued until a sea wall was built in 1886.