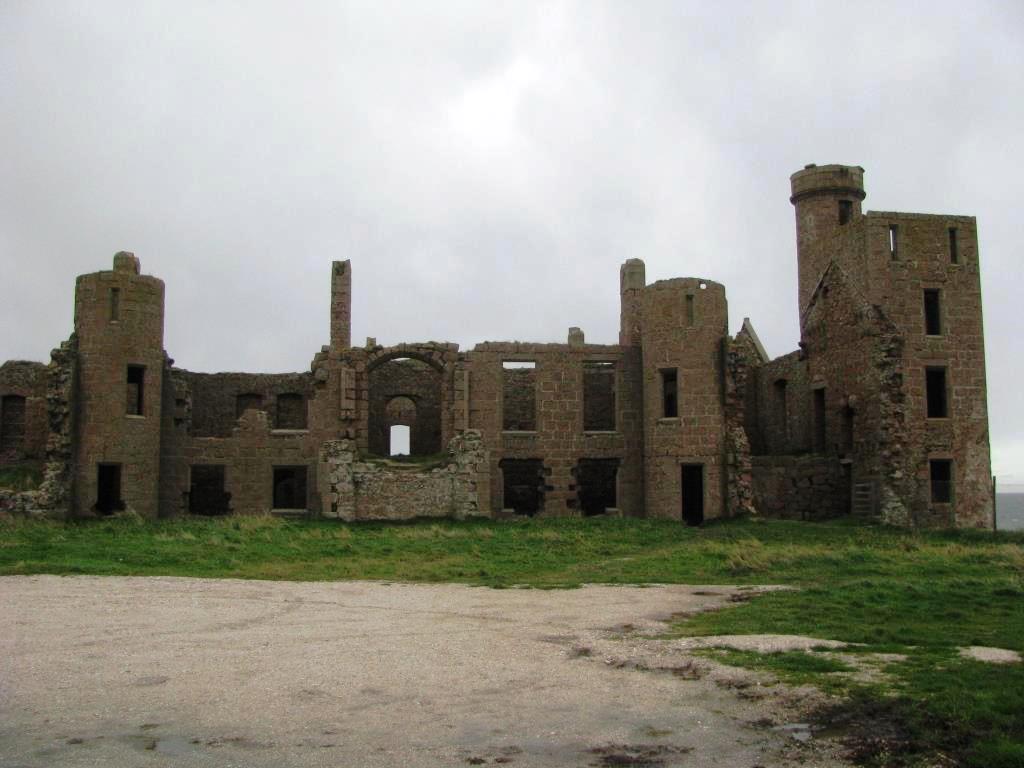 There are two different properties known as Slains Castle. For the history of the first, please refer to Old Slains Castle. This article refers to the second, which was first known as Bowness Castle and built on a clifftop in the late 16th century after the destruction of the old castle. This castle was then adapted into a massive gothic mansion built in the 1830s which is now derelict.

The first Slains Castle was eventually blown up by James VI as punishment for the unrepentant Catholicism and support of Queen Mary after her abdication of Francis Hay, 9th Earl of Errol. His activity included treasonous communication with the King of Spain, and armed rebellion alongside the Earls of Huntly and Crawford. In 1597, having surrendered to the king, Erroll renounced his Catholic faith and made his peace with James. There is no evidence that he chose to reinhabit his old castle at Slains, but a few miles up the coast was another Hay castle, the tower of Bowness, now near the village of Cruden Bay. This tower and courtyard were erected after the map of Buchan was drafted by Timothy Pont and can therefore be confidently dated to the very late 16th or early 17th century, and therefore was Francis’ work. The old tower occupies the south-eastern corner of the extended mansion on the very edge of the cliff, and the basement can be accessed from inside.

This simple square tower and courtyard was extended with buildings around the courtyard, and as the ranges were only a single room deep, meaning one needed to pass through a room to reach the next. In 1664 a gallery around the courtyard was added by the 11th earl to make access around the building easier, and the castle was extended a third time in 1707 by the 13th earl with a completely new entrance front; the renovated property was known as New Slains Castle. Both the 12th and 13th earls had Jacobite sympathies, but the 15th earl fought at Culloden on the side of the government before he came into his inheritance. In 1836 the whole building was substantially rebuilt for the 18th earl and refaced in granite; the substantial alterations masked the old castle almost beyond recall. The author Bram Stoker stayed near New Slains Castle in 1895, and despite suggestions that he may have been inspired by the ruined castle, this is popular myth as it was still very much occupied and a family home at the time.

It was sold by the Hay family in 1916 because of ruinous death duties, and the new owner chose to remove the roof and sell the more valuable building materials. It is still possible to walk around the ruins, but planning permission was granted to convert the castle into apartments in 2007. It is currently unclear whether these plans are still to go ahead as they were put on hold in 2009, although the owners have been given permission to extend the duration of the planning permission.