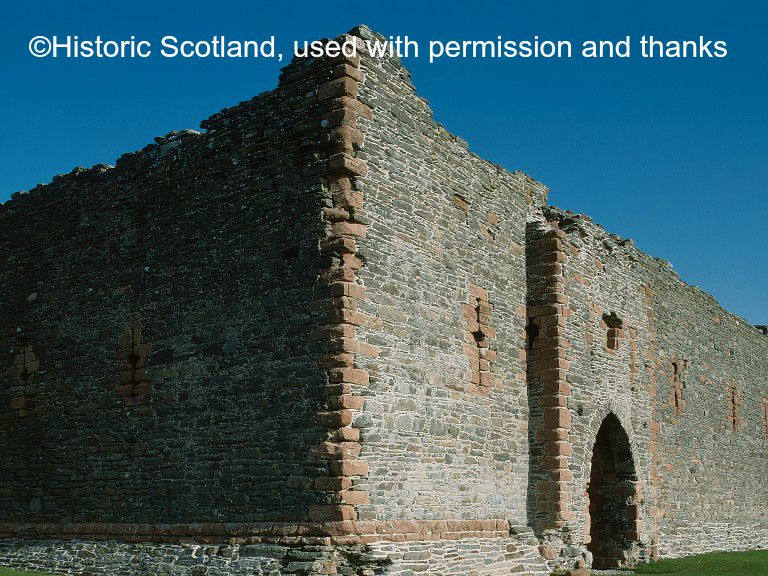 Skipness Castle is built on low-lying land overlooking Skipness Bay on the east coast of the Kintyre peninsular, and faces the Isle of Arran. Together with Lochranza on the opposite shore, it controls access to the Sound of Bute from the Kilbrennan Sound, and dates originally to the mid 13th century. It is important strategically to the control of the western seaboard.

The castle consisted originally of a stone-built hall and chapel, which were built in the first half of the 13th century by the MacSween family, who also built Castle Sween elsewhere on Kintyre. In 1262, Dougal MacSween granted Skipness to Walter Stewart, Earl of Menteith, and it appears likely that he was responsible for the strengthening of Skipness. The chapel was demolished, the hallhouse was extended to fill the north wall, a curtain wall erected around the two buildings with two towers and a gatehouse. It is possible that an earlier courtyard wall existed, but if so it was radically strengthened. The following year, the Norse under King Haakon invaded Scotland with a large navy, and were defeated at Largs. The role of the MacSweens is not certain. King Haakon felt they were untrustworthy and required hostages from them despitre the fact they fought for him.

King Alexander evidently felt aggrieved, and the MacSweens were dispossessed. It is notable that one of the family held faith with Edward I in the early 14th century hoping for his lands to be restored. This was not to be a successful ploy, and the area remained under the control of the Stewarts. It was granted by Balliol to John Macdonald of Islay in 1335, but as the Islesman was considered a traitor by the government of David II, the grant was never hooured, and the lands were instead granted to the nephew of the King, Robert Stewart. Eventually Skipness was granted back to the Macdonalds, and they held it until 1475, when the Lord of the Isles was stripped of his lands. Although granted some of these back, Kintyre and Knapdale were not among them. In 1499 Skipness was granted to the Earl of Argyll, and at some point in the 16th century the eastern hall-extension was converted into a tower house, and a new gate knocked through the north wall. The castle was besieged by that enemy of the Campbells, Alastair Colkitto, in the 1640s, and was eventually abandoned at the end of the century to be used as a farm.

In 1898 the farm was removed and the buildings consolidated. Today it is maintained by Historic Scotland and is open to the public at no charge. The tower house is kept locked outside of the tourist season.