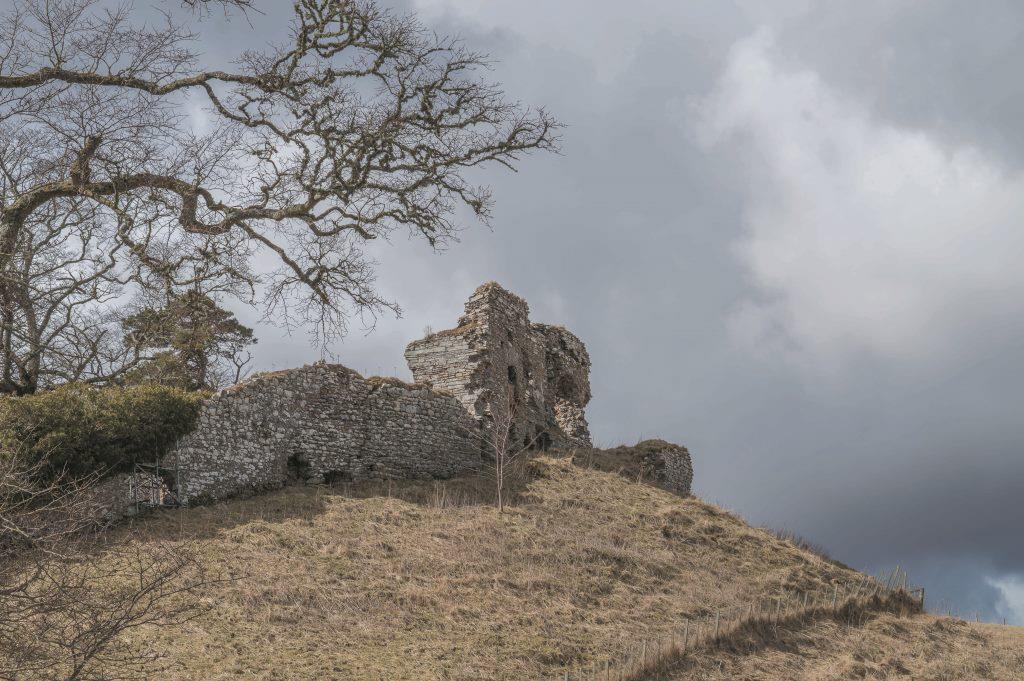 Skelbo Castle occupies a natural high point at the end of a ridge overlooking the junction of the Skelbo Burn and Loch Fleet in Sutherland. A short distance to the north is the ducal seat of Dunrobin, and to the south is Dornoch, the seat of the Bishops of Caithness. Skelbo sits centrally within the county of Sutherland along the important east coast area, which provided the quickest routes to the more wealthy lands to the south, and the former powerhouse of the north, Orkney.

The castle is described as a motte and bailey castle, but does not actually conform to this description. The main tower, referred to as a keep, is a strong hall-house which sits on the highest point of the site, and overlooks the roughly triangular courtyard beneath it. The summit has probably been levelled to accommodate the tower, and a lower central platform can be made out. There are no other mural towers along the courtyard surviving, although a suggestion of a return on the south-eastern corner may once have been one. The southern courtyard wall has an opening in the centre, with the eastern section of wall offset to the western, meaning that a possible entry point to the castle may have been here. However the slope is steep and this may have just been a sally port of some sort, with the main entrance lying elsewhere. The south-western corner of the courtyard wall has been lost, and to the north of this is a large 16th or 17th century mansion house. On this side of the castle, which faces the ridge, it seems likely that the slope has been scarped to provide a stronger defence in that direction, and this seems the most likely position for an entrance gateway.

Plans of the site show the footings of ranges of buildings along the north-east and southern wall, but these cannot be made out due to the overgrown nature of the site. On what seems to be the outside of the main tower on the summit is a recess which appears to be similar to a chimney flue, but beneath this is a slit window; a section of walling may also represent an external wing to the tower, although this is far from clear. Repairs to the fabric of the tower have obscured several features of interest, and more recent repairs and scaffolding do not help the interpretation of the building. Only the northern wall and an L-shaped section on the south-west corner survive, and the openings in the wall have been heavily robbed in most cases. However, it appears to have been the case that the tower was a more complex building than first appears. The north-east wall is overgrown with ivy for half its length and has also been repaired in recent years, which has obscured some of the possible features relating to this range of courtyard buildings. This is a shame, but the work was clearly necessary to save the building.

Skelbo first appears in history as a property of Hugh Freskin, a member of the powerful de Moravia family based at Duffus, and there are similarities between the two sites. Hugh was granted the lordship of Sutherland by King William between 1202 and 1211, and probably founded Skelbo Castle. It was in the latter year that Hugh granted Skelbo and other lands in the southern part of his lordship to his relative Gilbert de Moravia, who was Archdeacon of Moray, and was elected Bishop of Caithness in 1222 after the murder of the previous bishop. In 1235 the grant was confirmed by William, son of Hugh, and on Boxing Day 1235, after utilising Skelbo as a base to establish himself in the north, Bishop Gilbert granted the lands to his brother Richard of Culbin in Moray. In 1275, following disagreements over the various grants of Skelbo to the church, William Earl of Sutherland and Archibald Bishop of Caithness came to an agreement over the lands, and in this document mention is made of the castle of “Schythebolle” amongt others. In 1290, the English and Scottish commissioners were at Skelbo Castle to receive the news that the Maid of Norway had died, triggering the devastating Wars of Independence, and it was this castle which was taken by Robert Bruce in 1308. It is likely that in line with his policy Bruce destroyed Skelbo Castle, or instructed its owner to do so – Sutherland was pro-Bruce by 1314 and fought for him at Bannockburn.

Disputes over the ownership of Skelbo Castle continued, resulting in another indenture between Ranald Murray of Culbin and Kenneth Earl of Sutherland, which saw the marriage of Culbins son Gilbert to Sutherlands daughter Egidia. The connection between Skelbo and Culbin continued, with the Moravia line failing in the 15th century. The heiress daughter of Walter de Moravia married Thomas Kinnaird of that Ilk, already ion possession of Culbin, and in 1440 Skelbo also passed to the Kinnairds. It was not until 1529 that John Kinnaird of Skelbo chartered William Sutherland of Duffus in Skelbo, to be held directly from Alexander Gordon, Earl of Sutherland, and it remained in the hands of the Sutherlands into the 18th century. Kinnaird received 2,300 marks for the property. Shortly afterwards the Gordon Earl was murdered, and the north dissolved into anarchy, with the Sutherlands of Duffus being pursued by the citizens of Dornoch to Skelbo after they had attempted to burn the town down in 1570. It is believed that soon after this the large house was built on site, and was of a fairly basic construction with the first floor reached only by an external stair. The Sutherlands of Skelbo were Covenanters, and garrisonned Skjelbo against Montrose, who was unable to take the castle. Later Sutherland became a supporter of the King, and was fined £1500 by Cromwell for this support. Financial woes in place, it was no real surprise when Kenneth of Skelbo rose as a Jacobite in 1715, and suffered forfeiture as a result, the Earl of Sutherland claiming the estates and allowing Eric, the son of Kenneth Sutherland, to lease them when he eventually returned to Scotland. Afraid to be considered a Jacobite, he fled to the far north in the 1745 revolt, leaving the castle to be briefly garrisoned by rebels. After the revolt was over, the house was repaired and maintained as a residence until the late 18th century, when it was probably abandoned in favour of more modest accommodation and the castle used as a quarry for the farm buildings.

Today it is possible to visit Skelbo Castle on foot, with an access track leading to the castle site. The recent repairs were carried out by Historic Scotland at state cost to save the castle, whilst the estate who own the castle remains the subject of a legal dispute over inheritance.