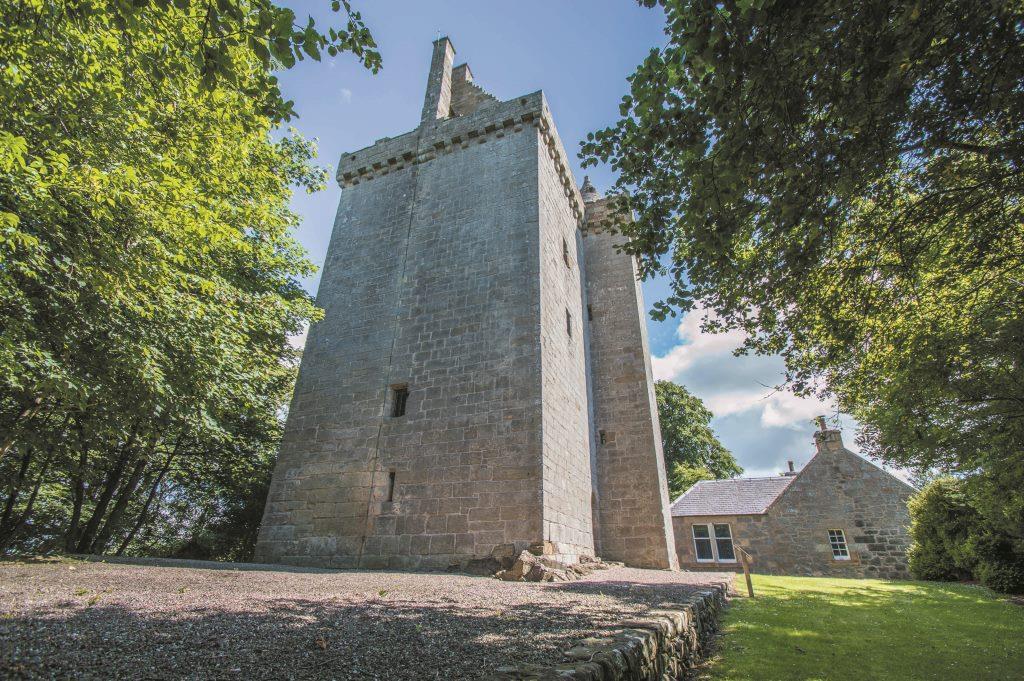 Scotstarvit Tower is what seems to be a normal 16th century L-shaped tower house on a natural mound overlooking the River Eden and the Howe of Fife. The mound is at the top of a fairly steep north facing slope of a hilly ridge between the Eden and the Craigrothie Burn, and the towers location is naturally defensive, although not of any strategic value.

The tower was built by the Inglis family. It is plain and simple in plan, a rectangular tower with a small wing containing the spiral staircase which serves all floors. There are two massive vaulted spaces, each of which was probably subdivided into two floors, as well as a fourth floor above, and a timber floored attic storey. The entrance is in the ground floor, which is lit by two slit windows, one in each gable. Two small windows in the gables light the first floor. The second floor, originally the great hall, was lit with three windows, the third floor with two, and rather strangely, the third floor has had the windows blocked up. The spiral stair opens onto the wall walk rather than into the attic room, and is topped with a conical roof.

Richard de Linton was granted the western part of the parish of Tarvit in the early 13th century by Malcolm Earl of Fife as a knights fee, and his descendants continued to hold what would later become a Barony until the 17th century. Presumably Richard was of English origin, and may have been a knight who had gained favour with King William, who was close kin to Earl Malcolm. It was for this reason that he was known as Richard Inglis – Richard the Englishman. The Inglis family had built the “Turris de Tarvet” by 1475, and it is probably this tower that survives today, although in altered form. The Inglis family do not feature much in history, and in 1611 sold the estate to Sir John Scot.

Scot redesigned the tower, including blocking up the fireplaces on the second and third floors, and installed a fashionable new fireplace in teh attic. He also decided to rename the estate after himself, and from this time onwards it was known as Scotstarvit rather than Inglistarvit. The new attic fireplace bears the date 1627 and the initials of Scot and his wife Anne Drummond. It was removed in 1696 and placed in the new mansion at Hill of Tarvit. In 1780 the tower was sold to the neighbouring Gourlays of Craigrothie, and later to the Wemyss and Sharp families before being gifted to the National Trust for Scotland in 1949. Today it is managed by Historic Scotland, and is open in the summer months. The key is available from the house next door.