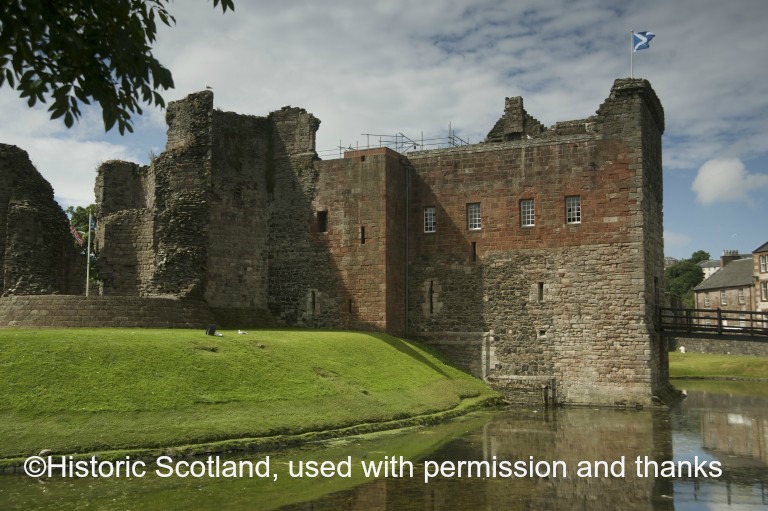 Rothesay Castle is a hugely interesting castle built on the strategically important island of Bute in the Firth of Clyde. The castle itself is built overlooking a wide bay and faces north towards Cowal and Argyll. It is circular in plan, defended by a wet moat and four round drum-towers as well as a rectangular tower serving as principal residence as well as gatehouse, and the earliest parts date to the 13th century.

Bute was a part of Scotland which had been held loosely by the Norse Kings since the late 11th century. However in 1164, in response to an increasingly heavy assertion of Scottish royal power in the west, Somerled, self-styled King of the Isles, led an army to Renfrew and fought a vital battle against Walter fitzAlan, the High Steward of Scotland, whose main castle was there. The outcome was a victory for the Steward, and Somerled was slain. FitzAlan was then permitted to expand his territory westwards, and by 1200 had established himself at Rothesay. The castle he built was almost certainly a castle of earth and timber, probably with the wet moat, but is said to have been rebuilt in stone by 1230, when the Norse King of Man was ordered by the King of Norway to take Bute back. Apparently the Norse were able to hack through a section of the stone wall with their axes in a three day assault, but it seems more likely this is medieval exaggeration, and either the gate was hewn through, or else the wall was at least partially still of timber. In a counter attack, the Scots retook the castle when the Norse fleet withdrew. In 1263 the castle was briefly taken again by the Norse, before their defeat at Largs.

Following these two successful assaults, Rothesay Castle was strengthened by the addition of the large round flanking towers. These did not make the castle invulnerable, as it was taken by Robert Bruce from the English in 1311, by the English in 1334, and taken back by the Scots, probably in 1335. With the succession of the Stewards line to the throne, Rothesay became a favoured royal residence, and in 1462 was able to withstand a siege by the Lord of the Isles. In the early 16th century the entrance was strengthened, the arched gateway was replaced with a gatehouse, which doubled up as a tower house, and the height of the curtain walls was increased.

This was not enough to prevent Rothesay Castle being taken by the Earl of Lennox on behalf of King Henry VIII in 1544, and after an occupation by English troops under Cromwell in the 1650s, it was partially demolished. Further destruction was done by the men of the Earl of Argyll in 1685 during the rebellion of Monmouth in that year. The hereditary keeper of the castle, the Marquess of Bute, started tidying up and restoring the castle in the early 19th century, and this work was continued by his son, although some of the restoration is a bit dubious to say the least. Today it is maintained by Historic Scotland, and open for a fee.