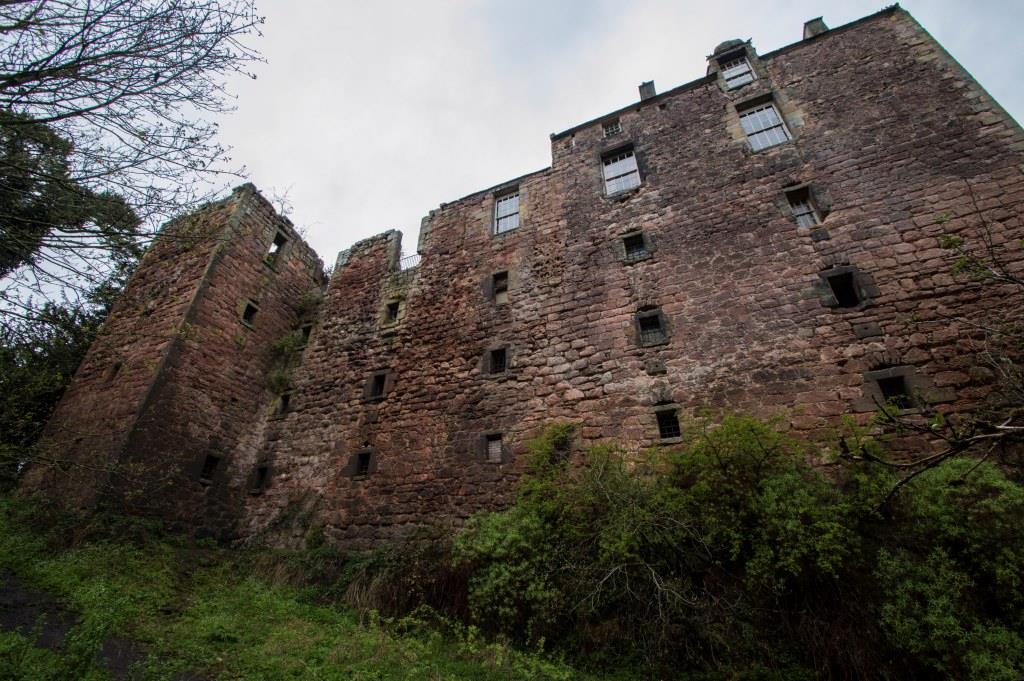 The ruins of Rosslyn Castle occupy the top of a steep-sided promontory within a narrow loop of the River North Esk, with the principle approach being defended by a wide ditch. They can be reached on foot via a pleasant walk from the car park at Roslin Chapel; the path is well maintained although slopes downwards to the castle, so an uphill return journey is to be expected.

The origins of the castle are disputed, but the lands were granted to William Sinclair by King David I in the 12th century, and remained in the hands of the Sinclairs for long afterwards. In fact, it has been suggested that an earlier castle was built either on the south bank of the river – or else by the Chapel. Given the obvious defensive strength of the current site, this appears unlikely. Although it is probable that a castle existed during the Wars of Independence, it was almost certainly destroyed, with Sinclair of Roslin a supporter of Robert Bruce. There is little evidence of this early castle – the masonry of the southern tower by the bridge has been dated to the 13th century and certainly looks older than other phases.

In the late 14th or early 15th century, one of the first two Henry Sinclairs, Earls of Orkney, rebuilt the castle, adopting a plan which consisted or a large tower and courtyard, with the ditch now overlooked by a large gatehouse-block. The keep was built with rounded corners, and rather unusually one section of the curtain wall was defended with curved bastions similar to those at Chateau-Gaillard in France, where King David II spent much of his early life. The corners of the keep and the unusual wall design may suggest that the castle was built during the middle two quarters of the 14th century. Repaired in the 15th century after a fire, the castle was attacked and burned by the Earl of Hertford in 1544, which meant that the castle needed to be rebuilt. The large five storey building in the photograph belongs to this period, and the castle was converted into a more fashionable fortified residence. However, during the mid 17th century, English cannon were placed to the north of the castle, and blasted the entrance and parts of the new house to pieces. Damaged again by a mob in 1688, Rosslyn lay mostly uninhabited, although a part of the house was occupied.

Today it is possible to see a substantial portion of the castle, although the habitable part of the old house (modernised and renovated) is still regularly occupied and privacy has to be maintained for the occupants. As such access to the inside and lower portions of the old house is not possible. The house is available to let through the Landmark Trust.