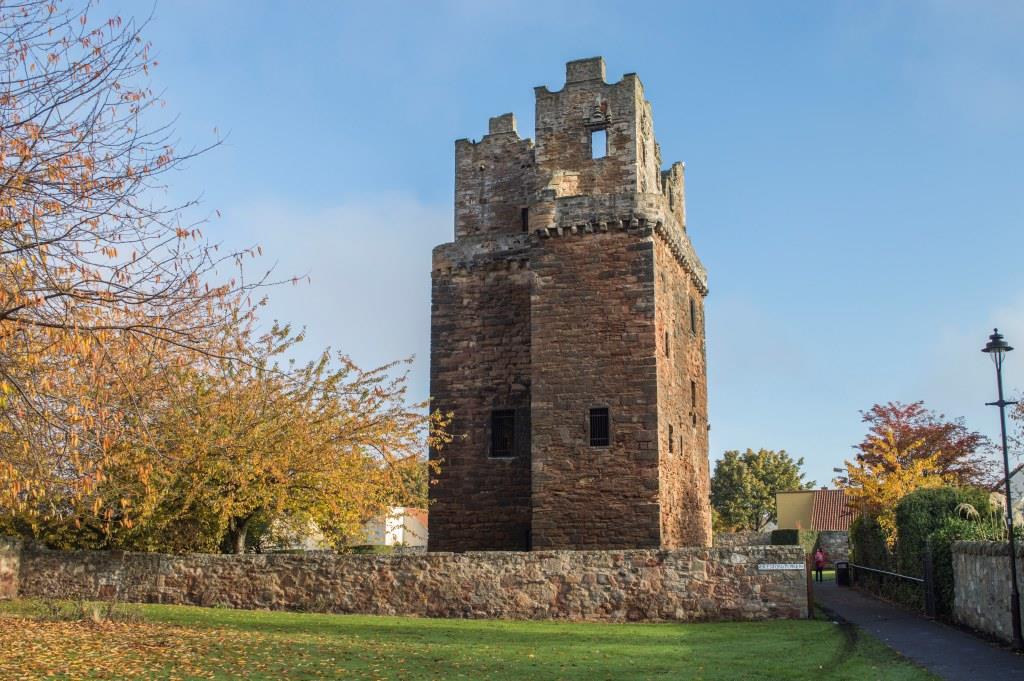 Preston Tower is to be found in a public park in Prestonpans on the coast a short distance east of Edinburgh. This was an area of strategic significance throughout the medieval period, but vulnerable to attack from England. The tower is a large and impressive tower-keep built on an L-plan and extended with an extra two floors. It is surrounded by a courtyard wall of later date which also includes a doocot within the walled area.

Preston was a property of the Seton family from the time of the Wars of Independence, prior to which it had been held by the Swans and de Quincys along with Tranent. The Setons were strong supporters of Robert the Bruce, and were probably granted the property when Bruce forfeited the Quincy family, who were Earls of Winchester. Sometime during the 14th century, Preston passed to the Lydell family, and with the marriage of the Lydell heiress to John Hamilton of Fimgaltoun, Preston passed to the Hamiltons sometime around 1425.

The lower part of the tower is of a style consistent with the late 14th or early 15th century, so it is possible that the tower was built by the Setons, Lydells or Hamiltons. The vaulted basement had a ground floor entrance and the first floor was reached by a stair, or via a trapdoor from the basement. This floor was also vaulted, and a spiral stair in the thickness of the wall led to the second floor and wallwalk. The wing was unusual, and is possibly unique. From the hall, a stair beneath a trapdoor led down through the thickness of the wall between the two parts of the building to a guardroom. A trapdoor from the chamber in the wing also led to this guardroom, which also had a trapdoor in the floor. This led to a pit prison in the base of the wing, on the same level as the basement. The castle was burned out in 1544 by the English under the Earl of Hertford, but repaired, and a new two storey house built – bizarrely upon the top of the tower. This restored home was burned out again in 1650 by Cromwell. After a third fire, this time accidental, in 1663, the castle was abandoned in favour of Preston House. In 1684 the Hamiltons were forfeited, and Preston Tower was never reoccupied, although it has been consolidated. Today it is administered by the local authority on behalf of the National Trust for Scotland, and is open to the public.