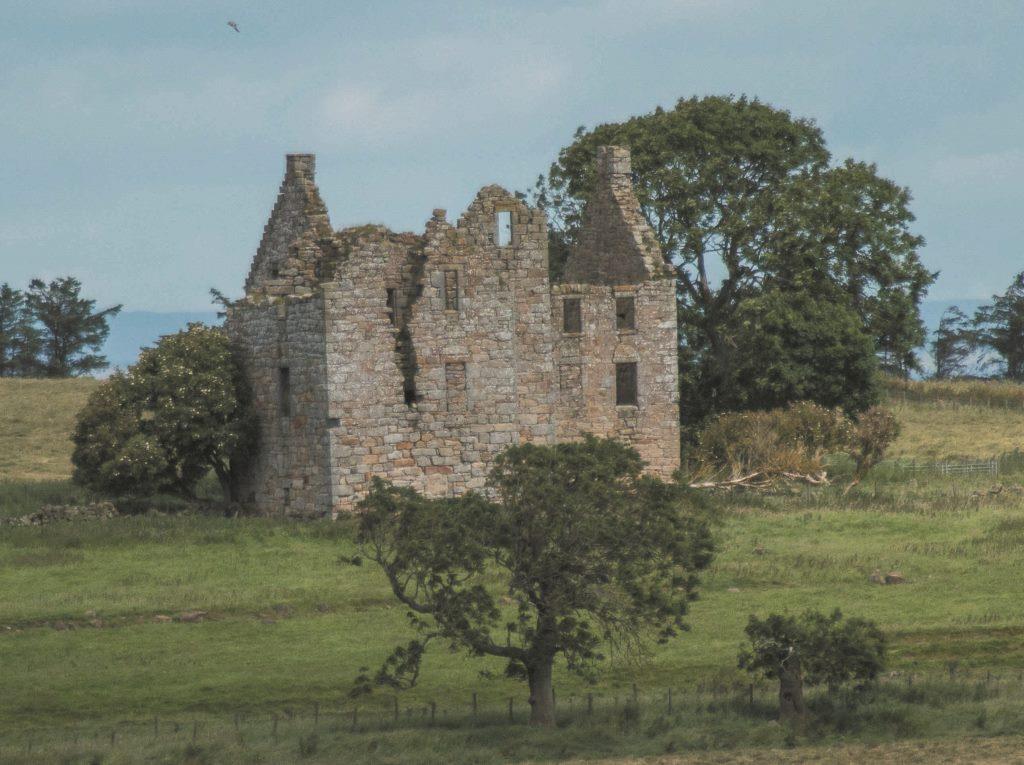 Pittarthie Castle sits on an south-eastward facing slope to the south of the Kinaldy Burn in Fife, which drains into the North Sea to the south of St Andrews. The location is prominent, but is overlooked by higher land to the west, and was probably chosen for its views across the land to the south and east than for any strategic reason – in fact today the castle sits about three quarters of a mile from the nearest road in the middle of fields, and seems to be remarkably isolated.

The lands of Pittarthie were for a long time the property of the Bishops of St Andrews; in 1452 King Jasmes II issued a charter which confirmed all grants made by his predecessors to the church and bishop of St Andrews, which specifically names those of “Pyttarthy”. In the latter 16th century they were held by James Monypenny of Pitmelie from the Bishop of St Andrews, and in 1598 he resigned the lands to King James VI, who confirmed the grant to Andrew Logan of Easter Granton and his heirs. The confirmation mentions the “fortalice” which indicates that the castle was built prior to this date. James’ grandfather David was a primary conspirator in the murder of Cardinal Beaton, who was his cousin. He died in about 1578 and was succeeded by James’ father, another David. Both Davids were exiled for their actions in support of the Reformation; James’ father had opposed Queen Mary’s marriage to Darnley, and was forfeited and exiled. It is perhaps a result of financial pressure that James elected to sell his estate – Pittarthie Castle is commonly dated to c1580 which suggests that the Monypenny family felt rather insecure in light of the troubles of the time. Logan appears to have sold Easter Granbton in about 1601, and Pittarthie was in the hands of the Bruce family from by the 1640s. William Bruce remodelled the house in the 1650s, and it remained in their possession until about 1700, when it was purchased by the Hannay family of Kingsmuir and their descendants the Hannay-Cunninghams. The details of the end of the house are not really known, but it is recorded that in 1854, Dr Robert Hannay Cunningham, his wife and two children were travelling by ship from Liverpool to Australia on RMS Tayleur when it was wrecked off Ireland. The doctor was killed having saved many of his fellow passengers. The story records that Pittarthie Castle was occupied up to this date at least.

The castle is built on a variation of the L-plan, with the wing offset from the main hall block. In addition a square tower containing the stairs serves all floors in the main re-entrant angle, and a small extension in the opposite re-entrant angle. A further winding stair projects from the body of the north wall of the hall as a roundish turret. The entrance to the house, above which was apparently a (now vanished) heraldic stone recording the remodelling of the house by William Bruce in 1652, is at the bottom of the staircase. The remodelling probably included the creation of the northern turret stair and the extension in the lesser re-entrant, as well as altering the windows throughout the castle. The basement contained two vaulted cellars in the main block, and the vaulted kitchen in the wing, but the vaults have collapsed meaning that the detail of the layout is unknown. Upstairs the hall takes up the entirety of the main block, with a small ante-room in the lesser re-entrant extension, and a chamber in the wing is reached via a small landing in the winding stair. The hall seems to have been divided in two at a later date, probably again by Bruce. The second floor consisted of three chambers in the main block, one in the wing, and the small chamber in the lesser re-entrant is accessed from the room in the wing only. A watch-room was found above the main stair, which was reached by a narrow turret stair and was a storey higher than the rest of the building. The southern walls of the building are not square to the rest, meaning that the eastern gables are slightly wider than those to the west. Pittarthie Castle is well supplied with shot holes and gun loops, again suggesting the unease of the Monypenny family when it was built. There does not appear to have any obvious route of access other than across the fields, and it appears that the castle is fenced off for safety reasons.