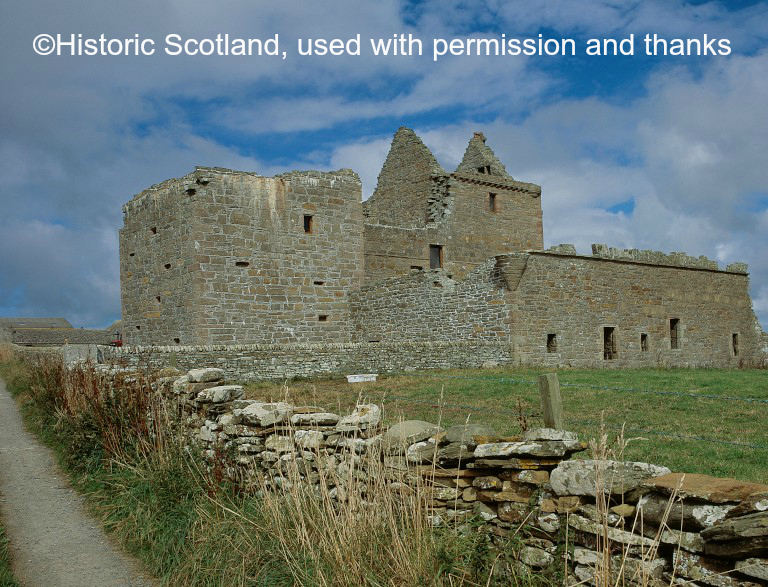 Noltland Castle is on the island of Westray, an island at the north-western edge of the archipelago. It is on a shallow slope which dips towards the Bay of Pierowall, and in the lee of Couters Hill. To the south is a marshy area and the Loch of Burness, but the site is deterrant rather than strongly defensive. The castle is a large Z-plan castle built in the 16th century, although an older castle stood on the site.

The earlier castle at Noltland was built by about 1420 for Thomas de Tulloch, the Bishop of Orkney, but there is no trace of it today. Bishop Tulloch was appointed by the King of Norway to govern Orkney on his behalf, and lived until 1463. The Earls and Bishops of Orkney did not always get on, and there were frequent disputes between them. When the 1st Sinclair Earl disinherited his eldest son William of Newburgh, he left William’s sons with some lands in Orkney, and after the death of the 2nd Earl at Flodden and in the power vacuum that followed, Sir William of Warsetter captured Noltland Castle by storm, although he restored it to Bishop Edward Stewart soon afterwards.

In June 1560, Bishop Adam Bothwell granted Noltland to his sister and brother-in-law Gilbert Balfour, who had been implicated in the murder of Cardinal Beaton. He soon began work at Noltland, a castle with a long central hall block, and square towers at the north-eastern and south-western corners. The ground floor entrance is in the SW tower, which also contains the main staircase, and is accessed via the courtyard, which survives to an unusual extent. One of the most striking features of the castle, though, is the sheer volume of shot holes – 71 – more than any other Scottish castle. He was clearly concerned about his security, but never finished the castle, since the hall block was intended to be a floor taller than it is. Only at one end was this achieved – the east – and the other end appears never to have been roofed. Balfour had fled to Orkney in 1567 after the murder of Darnley – he was also implicated in this – and it is possible that the castle was built at this time. He was accused of treason in 1571 and the Earl of Orkney seized Noltland, but was ordered to hand it back. Balfour fled into exile in 1572 when Mary was arrested, and this would tie in with the abandoning of work.

The castle was then occupied by Balfours nephew until 1592, when Earl Patrick of Orkney seized it in lieu of a debt. The castle courtyard range was added in the 17th century, possibly by Sheriff Arnot, appointed after 1611. The castle was a retreat for some of Montroses men and was taken by Cromwell in the 1650s. It was damaged in a fire in 1746, and abandoned. Today it is managed by Historic Scotland, and is open to the public.