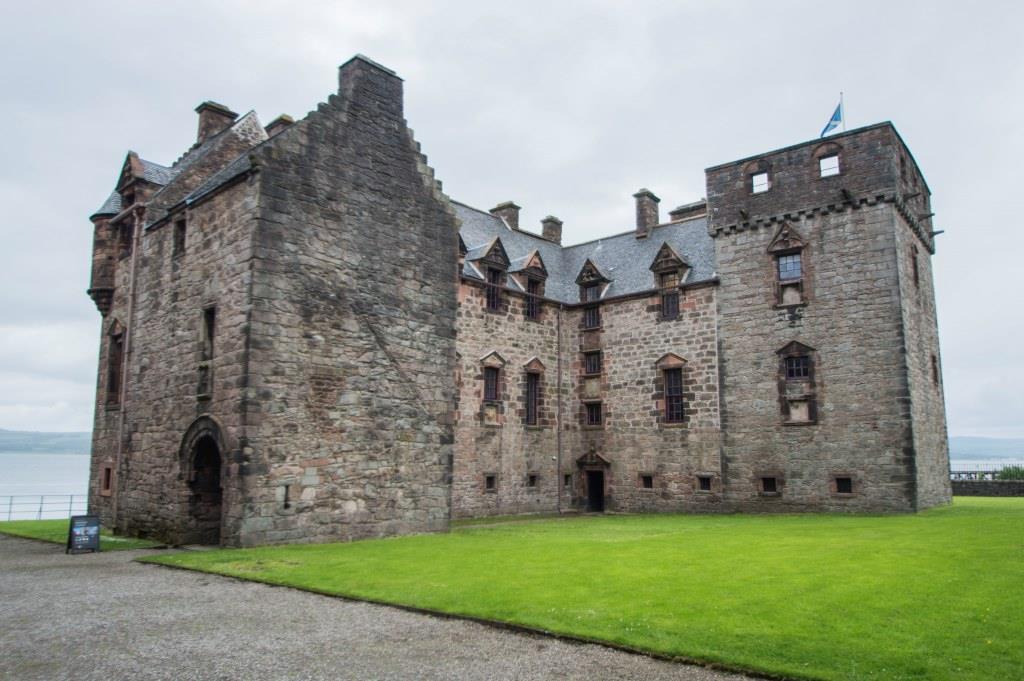 Newark Castle is to be found on the southern shore of the River Clyde at Port Glasgow. It is a very well preserved tower house with the oldest part dating to the late 15th, but mostly from the 16th, century. It was probably built for the Maxwells and is the point at which the Clyde narrows and starts to become more tricky to navigate because of the sandbanks.

Sir Robert Maxwell of Calderwood married one of the heiresses of Sir Robert Dennistoun of Finlaystone and came by the estate in 1402, but there is no evidence of an earlier dwelling here. The oldest part of the castle is the four storey rectangular keep to the south-east. This was built in the last quarter of the 15th century by Sir George Maxwell, Sir Robert’s great grandson after he acquired the Barony of Finlaystone from his father in 1478.The castle was accompanied by a rectangular courtyard, and from an early date was referred to as the New Work” from which it gets its name. In the mid 16th century a gatehouse was built opposite the great tower, probably by the son of Sir George (Patrick) or more likely Patricks grandson – another Patrick. Towards the end of the 16th century, the second Patrick built a large hall block to connect the keep and gatehouse across the northern end of the courtyard. This work was completed by 1599, as datestones bearing his monogram and the years 1597 and 1599 can be seen on the building today.

Patrick was a survivor in an age of feuds, and despite being involved in the murders of Maxwell of Stanely, and the Earl of Eglinton, survived into his seventies, with no less than 16 children, and his home intact. His extensions bear a wealth of good quality Renaissance detail, inside and out, reflecting that he was an extremely wealthy and powerful man. He was the second laird of Newark to be succeeded by his grandson, a 3rd Patrick, who had a similarly long occupancy of the castle, and in 1672 had his lands consolidated into a single Barony of Finlaystone-Maxwell with Newark Castle its seat. In 1678 Patrick was followed by his son George, and in 1584 by his grandson John, who was the last of the Maxwells of Newark, and died in 1694.

John’s son George had inherited three large estates, and successfully wasted away the assets of all three, going so far as to change his name to Napier to secure one of them. He sold Newark in 1705 to William Cochrane of Kilmaronock, and it passed to Lord Belhaven, and then to a Farquhar of London before being inherited by Sir Michael Shaw-Stewart, Baronet in the 1850s. The castle appears to have been only partially habitable throughout the 18th century, and was abandoned. It passed to state care in 1909, and is now maintained by Historic Scotland, and open for a fee in the summer.