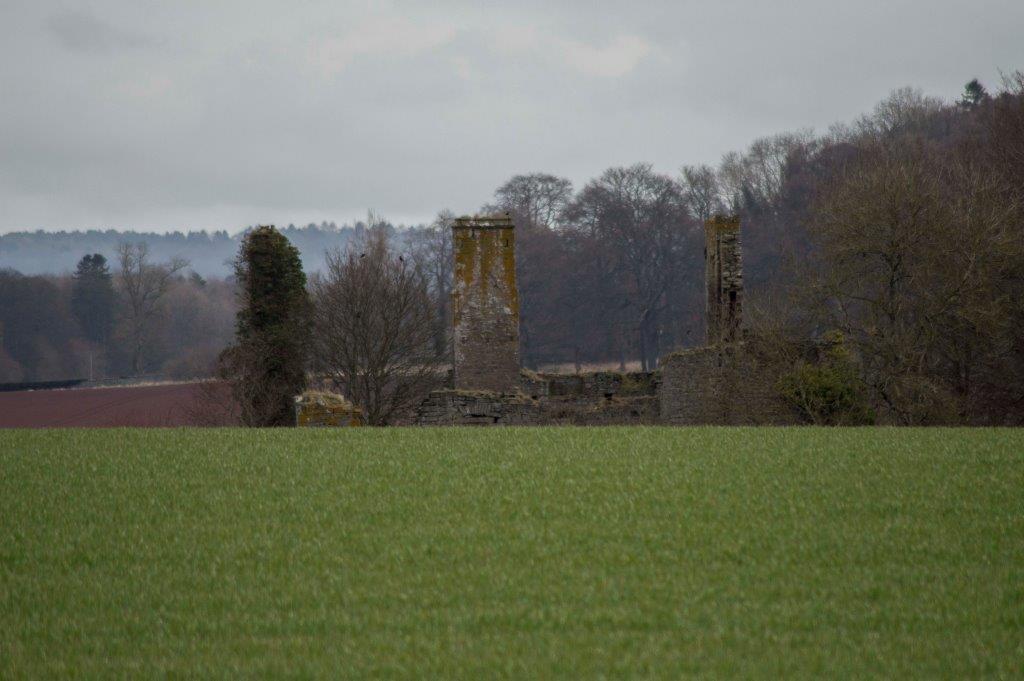 The top of Moncur Castle can be seen from the B953 north of Inchture, and is reached via a track from Baledgarno, and then across agricultural land, so access is not always possible. The site is on flat low lying land drained by the Moncur and Rossie Burns. It is not at all defensive and must be in reality seen as being at the defensive house end of the tower house scale. It is surrounded by land which can be heavily overgrown and is not easy to access.

The lands of Moncur were part of the Barony of Inchture, which was held by Sir John Kirkcaldy in the 12th century. His heiress daughter Marjorie married Reginald de Kinnaird, and Inchture remained a possession of the Kinnairds for centuries. However a Sir Michael de Moncur is on record witnessing charters in the 1220s and 1240s, and it is traditionally said that he or his father met with Earl David of Huntingdon on crusade and returned to Scotland with him, and that the lands of Moncur were granted to him; this would suggest that part of the barony of Inchture had reverted to the Crown. By 1302 Sir Michael was dead, and Marjory de Moncur appears as Lady of Rossie with her son Michael in documents of 1302; Michael later appears in a document of 1344. The history of the Moncurs is incredibly obscure, but it seems probable that the descendants of Michael de Moncur retained the lands of Rossie into the 16th century when the line ended with an heiress daughter Margaret who married Patrick Kinnaird of Inchture in 1542. What happened to the lands of Moncur is unclear. A charter of 1540 granted by Andrew Moncur of that Ilk gave the lands to George Crichton, Bishop of Dunkeld, the circumstances unknown. In 1565 Patrick Kinnaird, son of Patrick and Margaret Moncur was chartered in the barony of Inchture, but Moncur is not mentioned. It seems unlikely that the castle of Moncur was actually built by the Moncur family, and although it is possible that he castle was founded by the Bishop of Dunkeld, it is most likely that Moncur was a foundation of the Kinnairds. Tower houses appear on Ponts map named Inchture and Montcurr, and that of Montcurr has the text “of that Ilk” beneath, suggesting that there were two castles in the vicinity; a third stood at Castlehill Farm, Baledgarno.  This causes an issue with identifying who held Moncur Castle, and perhaps the lands of Moncur actually remained with Moncur of that Ilk as a separate property from the Kinnairds at Inchture until a later date. Moncur Castle had an uneventful history, and was burned down in an accidental fire in 1691, by which time it was certainly in the hands of the Kinnairds, perhaps with a further marriage. It was never repaired, and the family moved to Drimmie House, which was to the east of Rossie Priory.

Moncur Castle is a Z-plan tower house, with a long central hall block, a square tower to the north-east, and a round tower to the south-west. The basement was vaulted and split into two rooms, a large kitchen to the north, and a small cellar to the south, which was reached via a private stair in a projecting round turret from the first floor. A round basement room at the base of the tower could only be reached from this cellar. The entrance was in the re-entrant angle of the square tower, which contained the principal stair to the first floor. This stair led to the great hall, to the south of which was a withdrawing room, and a private room in the round tower. The winding stair in the round turret led upstairs to the second floor which contained bedrooms; the round tower may have contained an additional floor level as an entresol. The whole building is well defended with shot holes, but bears no datestones or heraldic panelling, making identification of the builders difficult. Presumably there was a courtyard area associated with the castle, and evidence of an earlier dwelling on site can be deduced by the 5m wide and 1m deep ditch to the south-west and linear cropmarks in the vicinity which are suggestive of a moated manorial site as well as later garden policies.