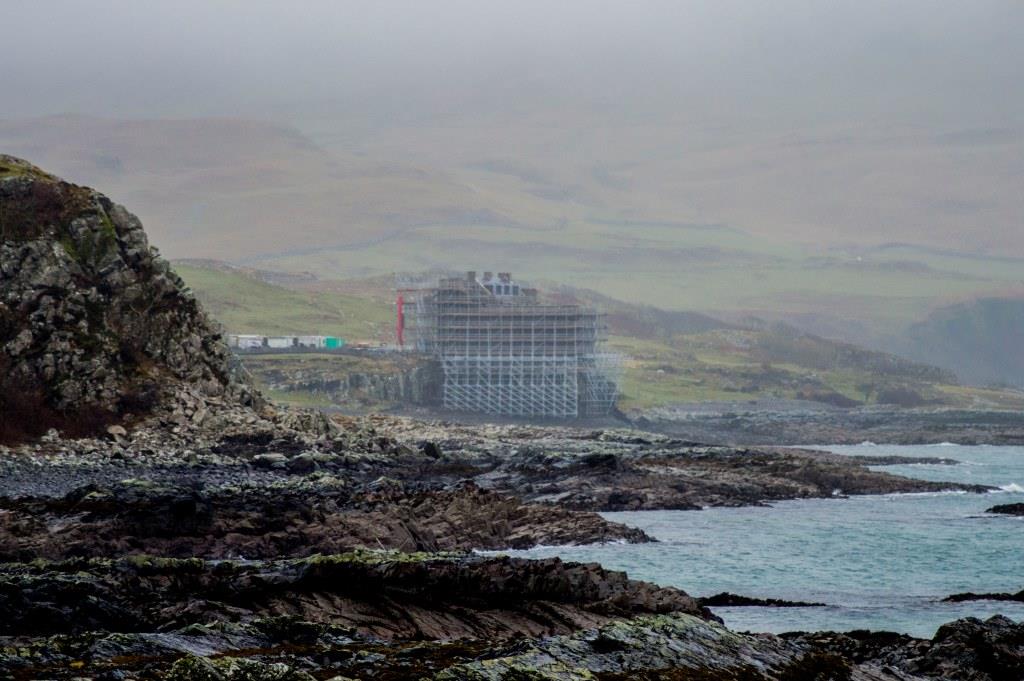 Mingary Castle can be found on the Ardnamurchan peninsular on the west coast of Scotland. Occupying a rocky peninsular above a similarly rocky bay, it is remote and forbidding. It dates to the 13th century, and is undergoing considerable stabilisation works, so at the time of writing is not open to the public. In May 2015, some months after my visit, removal of the scaffolding that has coated the castle began.

The castle enclosure is an irregular hexagon in plan, with the land gate facing the shore in one of the shorter sides, and accessed by a bridge of a rock-cut ditch, originally crossed by a drawbridge. The curtain wall was heightened in the 16th century and the hall was replaced with a three storey barrack block in the 18th century; at the same time a sea gate was added. Later in the 18th century, two further ranges of buildings were erected within the courtyard.

Ardnamurchan was part of the domains of the Lords of the Isles from the time Somerled took it back from the Norse in the mid 12th century. After his death it is likely that it passed to his son Angus, killed in 1210 with all his sons. Upon the death of Angus, Bute and Arran, known to have been part of his lands, were granted to his nephew Ruari, son of Ranald of Islay, but Ardnamurchan seemingly went to the elder brother Donald. Donald was followed by Angus Mor, who died in 1296. Mingary is said to have been built by the MacIains of Ardnamurchan, but this cannot be the case if it is 13th century. The eponymous Iain Sprangach (John the bold) was a son of Angus Mor, and brother to Angus Og, the supporter of Robert the Bruce, and was probably too young to have played a part in the construction of Mingary, although he would have lived at the castle.

In the late 15th century the MacIains were supporters of King James IV against their Macdonald kinsmen, with John MacIain possibly killing Alexander of Lochalsh in 1494, and capturing the Macdonalds of Dunyveg in either 1494 or 1499. King James visited Mingary Castle in 1495 and seemed on the point of subduing the Islesmen, but instead they rose in rebellion. MacIain remained loyal, and was conspicuously rewarded by the king. He was a target when the Macdonalds rose again in 1516, and was ejected from Ardnamurchan, and Mingary destroyed. Two years later, MacIain and the Macdonalds met in battle, and MacIain and two of his sons were killed. The MacIain family were seriously weakened, and could only return with the support of powerful patrons, the Campbells. When they were also pushed into rebellion against Argyll, the Campbell was able to evict them from Mingary Castle with privy council permission, and in 1629 Ardnamurchan was chartered to a member of the Campbell family.

The castle was taken in 1644 by Alasdair Colkitto, and retaken in 1646 by General Leslie before being returned to Argyll in 1651. By this time it was a garrison for the Campbells, and it is reflective of the new role that the old hall was removed and a barrack block erected in its place. It was held against the Jacobites in 1745, which was the last action the castle saw. In 1770 it was purchased by James Riddell, whose family lived in the castle until 1838, when it was abandoned. Mingary Castle is still owned by the Ardnamurchan Estate, and as yet is not open to the public. It is understood that once fully restored there will be public access.