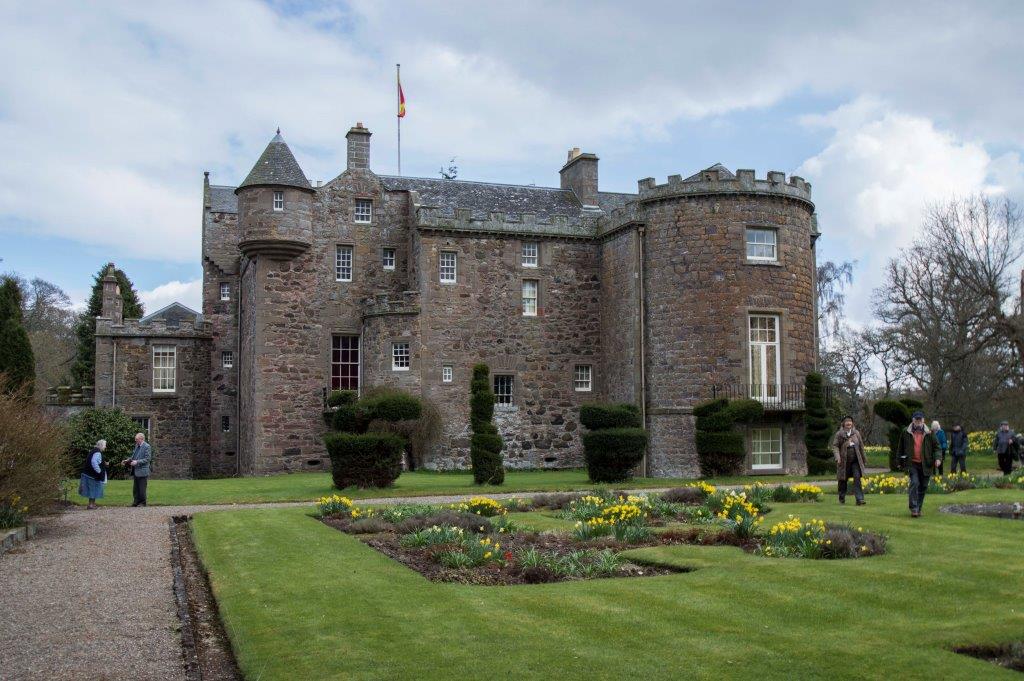 Megginch Castle is a much altered 16th century tower house built on the eastern slope of a low rise in the Carse of Gowrie, a short distance to the north-west of Errol. It is situated in private wooded grounds, and is not open to the public. It is not visible from any public roads, but can be seen from the outside on the occasional open day for the gardens.

At its core the old tower house is now largely hidden, but consisted of a rectangular hall block of three chambers with a square tower offset at the south-western corner, creating a long L-plan castle. The vault at the eastern end of the main block has walls that appear to have been slightly thicker, and this may be indicative that this part of the castle is older and was a tower-keep dating to the late 14th or early 15th century. Projecting from the north-western corner of this putative tower is a stair turret serving all levels which is crowned by a corbelled out caphouse of unusual design.

This castle was extended dramatically in the 19th century with the addition of a wing to the south of approximately the same size as the old hall block, and an L-shaped extension around the north and west of the hall block. The space created between the hall block and the south wing was largely filled in with a large open staircase, and a further rounded stair extension was placed in the north-western re-entrant angle.

Megginch Castle bears a stone which states that it was built by Peter Hay in 1575. The Hays of Errol were holders of land in the area since the 12th century, were made Constables of Scotland by Robert the Bruce, and Earls of Errol in 1452 for their support of the Crown against the Black Douglases. The builder of the castle was the 7th laird, and it was sold by his son Sir George to John Drummond of Lennoch in 1664. It was therefore the Drummond family who carried out alterations known to have taken place in the 18th century as well as the extensions in 1820 and 1928. A fire in 1969 meant that a substantial part of the newer portions of the house required restoration. The castle remains in the hands of the family to this day.