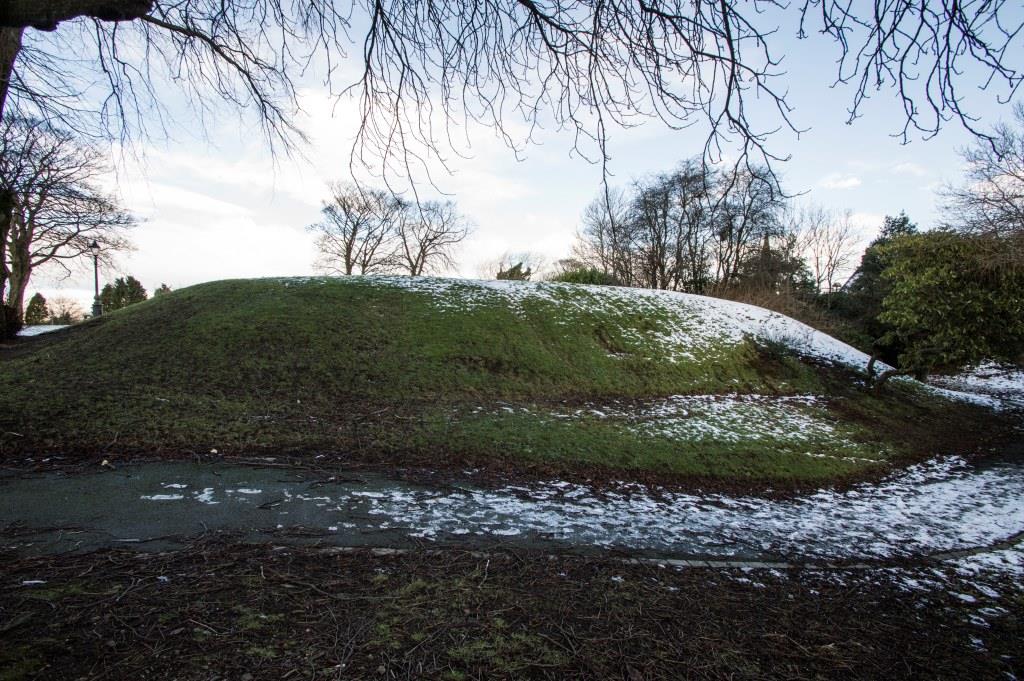 Kirkintilloch Castle can be found within the Peel Park to the north-western end of the town. It overlooks the Kelvin Water, and lies just to the north of the line of the Antonine Wall. The castle remains consist solely of a quarter of the earthwork mound which formed the core of a 12th/13th century castle, and perhaps half of the deep ditch surrounding it.

Kirkintilloch was granted to William Comyn in the late 12th century, and the associated settlement was granted burgh status in 1211. Strategically important, and probably built on the site of existing Roman earthworks, it was provided with a garrison of over seventy men, and it changed hands several times between 1299 and 1302. After the fall of the Comyns in 1307, King Robert the Bruce granted Kirkintilloch to Malcolm Fleming, but the castle appears to have been abandoned by this time, perhaps destroyed at the King’s orders. The Flemings did not choose to rebuild the castle at Kirkintilloch, instead basing themselves at Cumbernauld.

Although there are no remains of the castle visible today, 18th century accounts report that a “double rampart of hewn stone” remained at the site, but was being removed for building purposes. The earliest Ordnance Survey depicts the castle as a Roman Station, and depict that the mound was surrounded not just by a deep ditch on all four sides, but that the ditch itself was surrounded by a bank. By 1914, the mound had been mutilated by the addition of a bandstand in the south-west corner; this also removed about a quarter of the ditch. The bandstand remains in place today, and when considering the scale of Kirkintilloch Castle, it should be borne in mind that the castle site extended to the far side of the bandstand, and that the children’s playpark to the north is actually in the castle ditch. It is quite possible that an outer ward of the castle filled the space of Peel Park, St Ninian’s Church as well as the land on either side of Camphill Avenue. The site is open to the public.