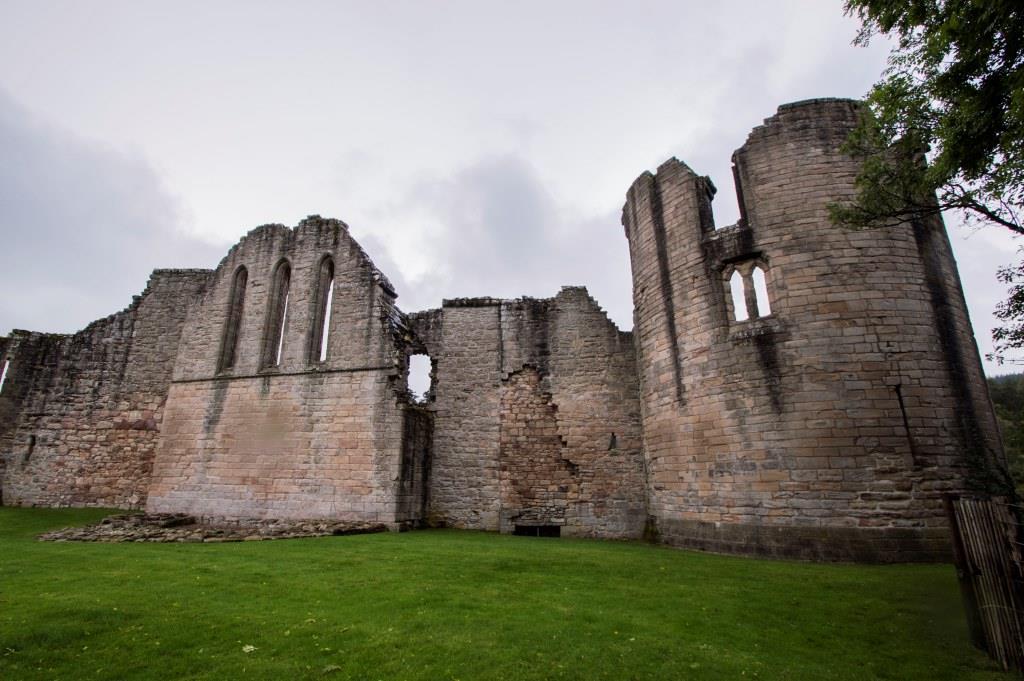 Kildrummy Castle is a large, shield-shaped ruined castle dating from the 13th century and was the seat of the Earls of Mar. It is built on the edge of a river cliff, and is on a ridge between two minor tributaries of the River Don. Today it is a Historic Scotland property and is open to the public seasonally.

The Earls of Mar had been based at the impressive earthwork castle called the Doune of Invernochty, but by the mid 13th century this was deemed too primitive, and Earl William had erected a courtyard castle of stone surrounded by a shallow ditch at Kildrummy instead. This castle was then strengthened by the creation of a larger stone castle within the outer curtain wall, and a far larger ditch being dug outside it. The four round towers – one of which was larger than the others and served as a keep – and main accommodation along the northern wall were all built at this time. A gatehouse was also built at this stage, but we do not know the design of this building. In an unusual alteration, a large chapel building was inserted into the curtain wall at an angle which looks very odd. In 1296 and in 1303 the castle was visited by Edward I of England. After his second stay, works were commissioned that seems likely to have included the rebuilding of the gatehouse and barbican.

In 1306 the castle was put to siege by the Prince of Wales, and once the castle had been taken (by treachery) the brother of Robert the Bruce was captured and taken to Berwick for execution. The castle was then unusually dismantled by the English to prevent its use by the Scots – a tactic adopted by the Bruce soon after. This did not prevent the castle being repaired, and Kildrummy was besieged again in 1335 by the English, in 1363 by King David and in 1404 by Alexander Stewart, who then kidnapped and married the Countess to gain control of the Earldom. Upon his death in 1435 the castle was claimed by King Robert III, and he probably commissioned further strengthening of the gatehouse against artillery. In 1442 it was attacked again – by Sir Robert Erskine, who was claiming it from the Crown.

In 1507 Kildrummy was granted to Alexander, 1st Lord Elphinstone, and the Elphinstones remodelled the interior of the castle including erecting the tower house which bears their name. In 1531 the castle was burned by John Strachan of Lenturk, a notorious troublemaker, and in 1626 the Erskines finally came into their inheritance and were granted the castle and title Earl of Mar. In 1654 the castle was taken and garrisoned by English troops and in 1690 Jacobite troops damaged the castle before retreating. It is perhaps surprising that the 6th Earl, who had only inherited his title in 1689, joined – and in fact led – the Jacobite cause in 1715. For his support, he was attainted and forfeited, and the castle fell into disrepair to be considered ruinous by 1724. In 1805 the seven storey Snow Tower, the old tower-keep, collapsed, and has been restored. The castle was passed to state care in the 1950s.