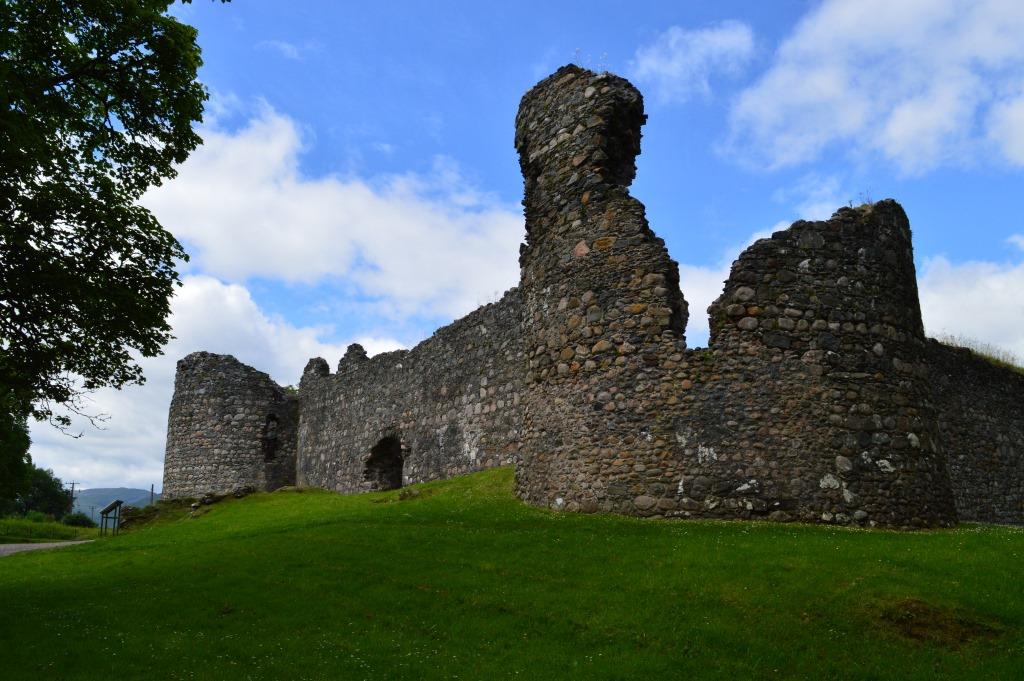 Inverlochy Castle is on the outskirts of Fort William, but is often overlooked by visitors more interested in the heights of Ben Nevis than the heights of 13th century castle design, which is a shame. Built on low lying land beside the River Lochy where it flows into the conjoined Loch Linnhe and Loch Eil, it commands access to the Great Glen, leading to Inverness and the Moray Firth.

The castle is simple in plan, a roughly square courtyard with round corner towers and two arched gateways facing each other on the north-west and south-east sides. These may have been defended by barbican-like structures. The western tower is significantly larger than the other three, and served as the principal accommodation for the castle. It was surrounded by a ditch, presumably a wet moat historically, which was itself surrounded by an earthen bank. Within the courtyard is evidence of ranges of buildings on all four walls.

Inverlochy Castle was the main stronghold of the Comyn family in Lochaber, which they acquired by 1230. It was not until the 1260s that the family started building powerful castles within these lands, and it is likely that Inverlochy was started by John I Comyn after he inherited these northern lands from his uncle Walter in 1258, and completed by his son John II between 1277 and 1302. After Robert Bruce murdered John III Comyn in 1306, Comyn lands were targeted by Bruce and Inverlochy was claimed for the King.

Bruce granted the Lordship of Lochaber first to Angus of the Isles, then to Thomas Randolph when he was made Earl of Moray. The Randolph Earls of Moray died out in the mid 14th century and Lochaber returned to the Lords of the Isles until King Robert II granted it to his son Alexander Stewart, Earl of Buchan, the notorious Wolf of Badenoch. After the death of the Wolf, the Lords of the Isles rebelled and a battle was fought outside the castle in 1431 in which the royal forces were defeated. What part the castle played in this is unknown, but by 1505 it was in ruins when it was granted to the new Lord of Lochaber, the Earl of Huntly.

Huntly repaired the castle, which played little further part in history. In 1645, the Marquis of Montrose defeated the Covenanter troops of the Marquis of Argyll at the castle, which was the last time the castle saw battle. It was abandoned in favour of a new fort at the river mouth, which was to be named Fort William. Part of this fort can be seen just off the An-Aird roundabout – it is the picnic area. Today the castle is free to enter and is managed by Historic Scotland.