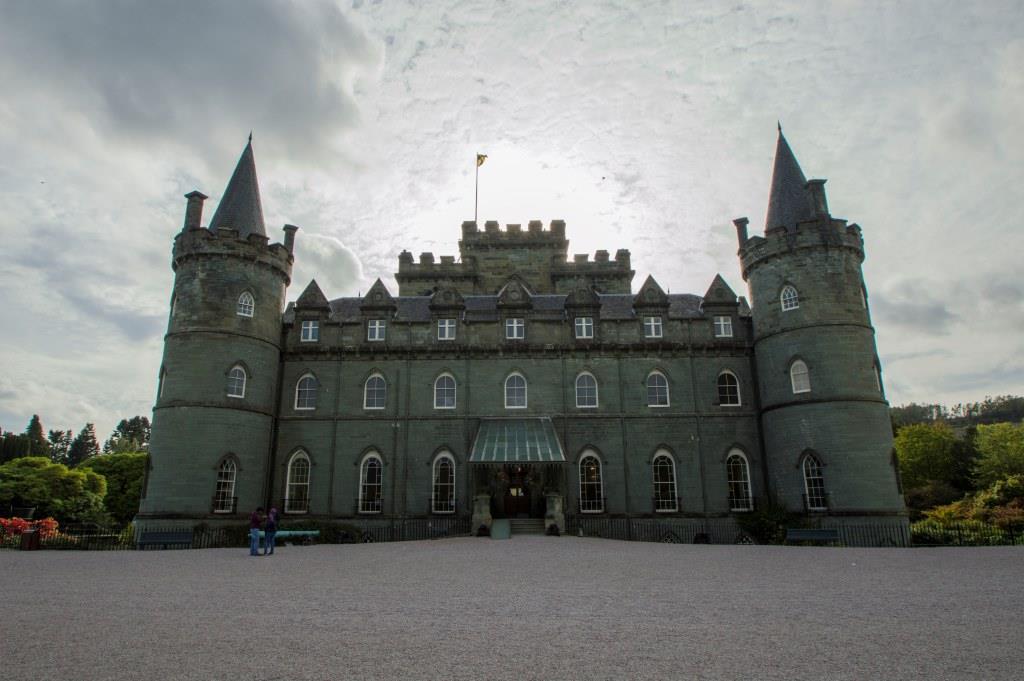 The Inveraray Castle we see today is an 18th century palace, inspired by a sketch of John Vanbrugh, the architect behind Blenheim Palace and Castle Howard. It was started in 1746, and completed after 43 years – during which time the architects William Morris and Robert Adam both contributed to its construction. Up until 1877, when it suffered a disastrous fire, was a storey lower, with the central tower standing proudly above the rest of the mansion, and the round corner towers did not possess their conical roofs.

There were, of course, earlier buildings bearing the name Inveraray Castle, the latest of which is remembered with a series of white markers in the front lawn of the castle. Within one of the display cabinets an image of this already ruined castle survives in a painting, which also shows another tall mansion or house in the background.

The Campbells held land in Argyll from the 13th century. Bitter foes of the MacDougall family, their local affairs led them to support Robert Bruce, and they were amply rewarded, gaining large estates across the region, rising to briefly hold the Earldom of Atholl, and in 1457 created Earls of Argyll. At approximately this date the earliest Inveraray Castle was erected, probably a square tower and courtyard like those erected at Kilchurn and Gloom, near Dollar.
By this time the Earls of Campbell had become trusted lieutenants of the Crown, and were among the principal beneficiaries when the Lordship of the Isles was suppressed. Later they became the principal agents of the Crown in the west, putting down rebellion among the Catholic clansmen.

In 1644, Inveraray Castle was assaulted by Montrose and Alasdair mac Colla, a member of the Macdonald clan, bitter enemies of the Campbells, and sacked. It is likely that this castle is what is depicted in ruins in the painting, and that a substantial residence was built by the Marquis as a new home, perhaps styled like a tower-house albeit without the substance of one, before his execution in 1661 by Charles II. The King revived the Earldom in 1663, and the new Earl was able to reoccupy Inveraray – until his own execution in 1685. His son Archibald was restored to the estates after supporting William and Mary, and was created the 1st Duke of Argyll in 1701. It was Archibald’s eldest son John, the 2nd Duke, who commissioned the building of the new Inveraray Castle before his death in 1743, and younger son Archibald, the 3rd Duke, who saw the castle completed, although he never lived in it, dying without issue in 1761.

Inveraray Castle and the Duchy then passed to Archibald’s cousin John, and remains in the family today. Perhaps a third of the castle is open to the public, with rooms including the Armoury, Dining Room, central tower and several bedrooms part of the tour. Despite its name, it is clear that the primary function of this building was domestic, not martial, with large windows being the order of the day. However the enormous amount of arms on display make no bones about the warlike past of the Campbell clan.