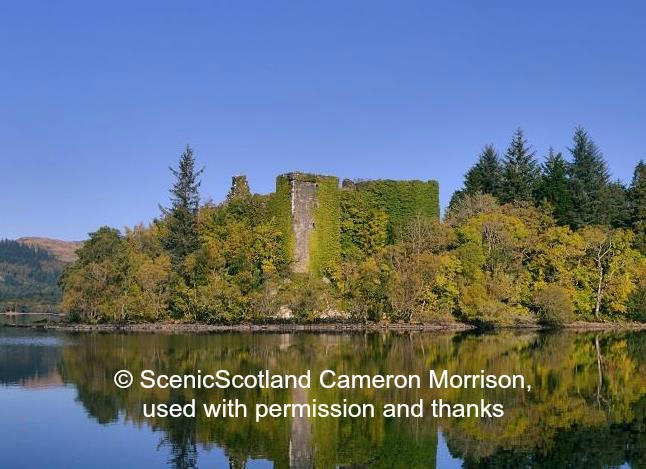 Innis Chonnel is an island off the southern shore of Lochawe in Argyll. It is accessible only by use of a boat or canoe, which are available for hire at some of the villages around the loch. It contains a ruined courtyard castle which dates from the mid 13th century, and which was the chief seat of the Campbells up to the late 15th century.

The castle is divided into three areas, an outer eastern courtyard, oval in shape, and surrounded by a curtain wall. At the western end this narrows to a bottleneck occupied by a gatehouse leading to a small central courtyard, also defended by a curtain wall. At the western end of this courtyard a steep slope leads to the oldest part of the castle, a roughly square area surrounded by a thick wall with solid turrets to the south, and entered by a simple arched gateway. Within this courtyard, a range of four vaulted cellars fill the western wall, and a large building occupies the south-eastern corner. Linking this to the cellar range are two other smaller rooms. Above the cellars were the great hall and kitchen, entered at first floor level, and a pair of chambers at the southern end extending into the turret provided a withdrawing area for the lord. A narrow corridor from the south-eastern building led to a watch room in the turret overlooking the entrance. Both hall block and south-eastern building extended up to a second floor, but the remains are too ruined to interpret further.

Lochawe was the original base for the Campbell family, and their tenure extends traditionally back to the 11th century. The earliest phase of the castle is the inner walled courtyard and south-eastern tower, and was erected some time in the first half of the 13th century. The earliest date we have confirmed records relating to Lochawe confirm that Alexander MacDougall of Argyll held the area, with unnamed baillies acting on his behalf in Lochawe in 1293. Since the MacDougalls had the lordship of Lochawe, it is likely that Alexander or his father Ewan was responsible for the erection of the castle. Colin Campbell, who appears as a supporter of Robert Bruce in 1291 during the discussions over who should succeed as King of Scotland, was killed fighting the MacDougalls in 1296. His son, Sir Neil, was a strong supporter of the Bruce, and the MacDougalls opposed. It seems unlikely that the Campbells were the baillies of the MacDougalls. Indeed, John MacDougall held Innis Chonnel against Robert Bruce in 1308. When they were defeated at the pass of Brander, the MacDougalls went into exile, and it is perhaps only at this point that Lochawe and Innis Chonnel passed to the Campbells.

The castle remained largely unaltered until the 15th century, and it is likely that Sir Duncan Campbell, who inherited in about 1414 and was made Lord Campbell in 1445 was responsible for the improvements, as well as the new castle at Kilchurn at the northern end of Lochawe, and the new family seat at Inveraray, both of which may have been in response to his elevation. After this, Innis Chonnel castle appears to have functioned as a prison in 1484, and at least two sets of hereditary Captains are known, the MacLachlans holding the post from 1613 until the late 18th century at least. By the beginning of the 19th century the castle was in ruins. It remains the private property of the Campbell family.