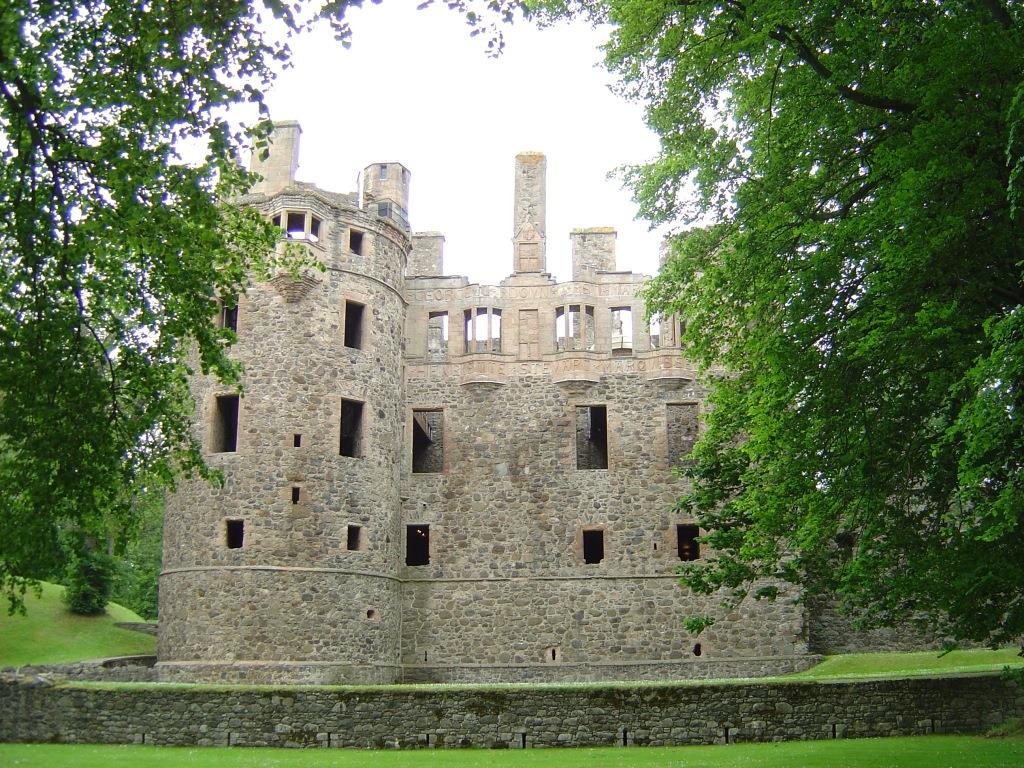 Huntly Castle is a ruined castle with recognisable features dating from the 12th to the 17th centuries, and was the principal residence of the Gordon Earls of Huntly from the 15th century to the late 16th. Built on a natural high point in the angle of the River Deveron and the Bogie Water, it is an impressive and interesting castle to visit, and is managed by Historic Scotland.

The most significant part of the remains is the round tower and hall block with the highly decorated top floor, and extraordinary heraldic panel over the courtyard entrance. In addition to this large parts of the loggia, east rang and bakehouse survive, but the rest of the masonry only exists as foundations, including the great 14th/15th century tower-keep. Earthworks also abound at Huntly, the biggest being the great motte, the original “Peel of Strathbogie”.

The Peel was built by the earl of Fife, a powerful magnate related to the royal family, and remained in the family of his descendants until the Wars of Independence, when the de Strathbogie Earls of Atholl opposed Robert the Bruce and were forfeited for treason. The lands of Strathbogie were granted to Adam de Gordon of Huntly in Berwickshire, but the Strathbogies made repeated efforts to recover their estates, with the support of the English.

By the time Sir Alexander Seton was made first Earl of Huntly (adopting his wife’s name Gordon), the great tower had been built, but this was burned with the rest of the castle in 1452-55 by the rebel Douglas Earl of Moray, possibly leading to the creation of the new residential block consisting of a round tower and hall block on the south side of the castle courtyard. In 1506, the castle was officially renamed Huntly Castle. Further improvements to the castle by the fourth Earl were completed in 1556, but the castle was sacked after he died at the Battle of Corrichie in 1562, Repairs by his son were incomplete when the castle was attacked in 1594 by James VI, and the tower house was blown up. Returning from exile in France in 1597, the 6th Earl became Marquis of Huntly, and by 1606 the palace was complete.

The castle was extended again by the 2nd Marquis, after damage caused by occupying troops in 1640; it was occupied again in 1644 and besieged in 1647. In 1689 it was the headquarters of Viscount Dundee, the Jacobite, but was in decline, with the Marquis preferring to stay at Bog of Gight in the north. Huntly Castle was occupied by Government troops in the 1745 Jacobite Rising, but was then left to ruin, and was used as a quarry for building materials.