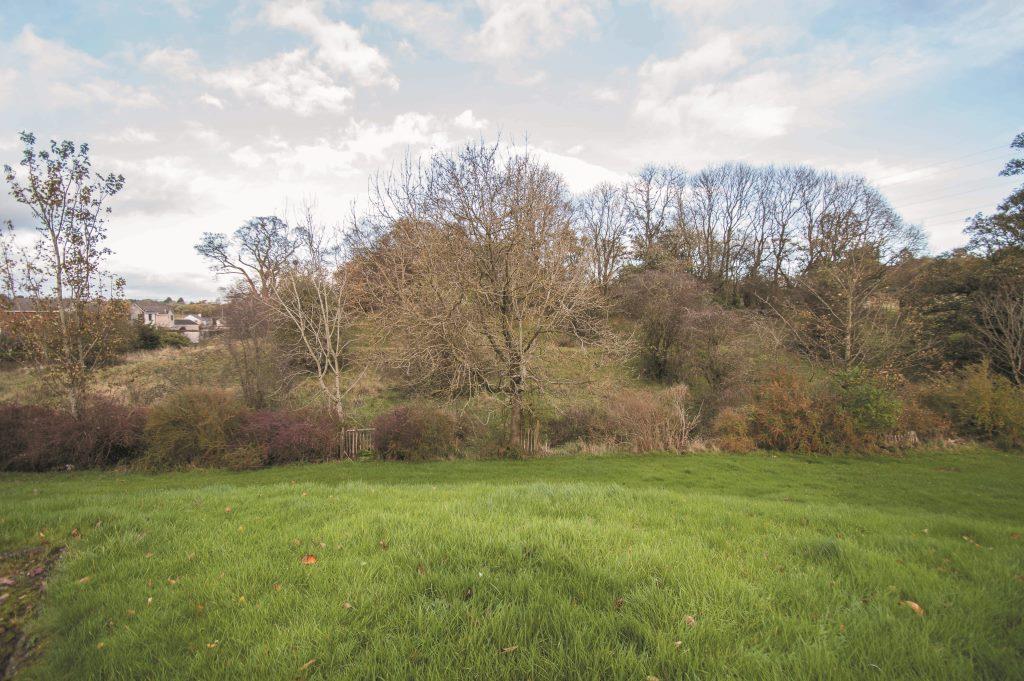 There is no trace of Halkhead Castle surviving today, and the successor building, Hawkhead House, was demolished in 1953. The site of the building can be reached on foot from Ben Alder Drive through the farmyard, but there is nothing to see save the regularised steep slopes overlooking the Oldbar Burn, which runs into the White Cart Water a short distance to the north. Some of the trees nearby follow the outlines of 19th century planting, but thats about it.

The lands of Halkhead were held by the Stewart family until 1367, when Sir John Ross acquired them from the future Robert II in return for a nominal payment of either a pair of gloves or two silver pennies payable to the king. Sir John was the first in a long line of Rosses to hold Halkhead lasting some 400 years. The first few of these were all called John, and remained of fairly local importance. By the late 15th century, however, the then John Ross had increased his holdings and influence to draw the attention of King James IV, and in about 1492 he was elevated to the peerage, becoming the first Lord Ross of Halkhead. He died in 1501 to be followed by his grandson, another John, who followed his king to Flodden, where he was killed, leaving as his heir Ninian Ross as the 3rd Lord Ross. Ninian, was followed by a younger son as his eldest, Robert, was killed at the battle of Pinkie in 1547. James Ross became 4th Lord Ross of Hawkhead in about 1556, and died in 1581, having been captured fighting for Queen Mary at Langside in 1568, and been recorded as a Marian sympathiser in 1578. Two of his sons were to inherit from him; his eldest was Robert, 5th Lord, and his second was William, 10th Lord. Robert was charged with rebellion by James VI in 1591, and Lord Hamilton was ordered to bring him in line that year. He was followed in turn by his son James in 1595, and James by his three sons – James (1633-36), William (1636-40) and Robert (1640/48) before his brother (d.1656).

In 1506, James IV visited Halkhead, and treated the masons of the 2nd Lord to a drink, indicating that the tower which was the seat of the estate was under construction – or perhaps being extended. By the time of Pont’s drawing which is dated c1590-1600, the tower was a large and impressive tower house with an associated courtyard, and there is the suggestion that the courtyard may have had domestic buildings around the edges in a palace style consistent with the status of the Lords Ross. The palace-style quadrangle was certainly the layout by 1634. The tenth Lord Ross, William, had been knighted the year before and was fined £3000 in 1654 for his support of the royalist cause by Cromwell, but this was later reduced to £750. When he died in 1656 he was succeeded by his son George, who fought against the Covenanters in the 1670s before dying in 1681. His son and grandson appear to have played no part in the Jacobite rebellions, and when the 13th Lord Ross died in 1754, he left no male heirs to succeed him in his title.

At this date the house was clearly not considered to be particularly great or impressive, and although General Roy marks it up as a quadrangle, there is no parks or woodland around. In 1782 the house was remodelled by James Playfair, and all traces of the character of the old building have been lost as a result. Lord Ross had left a daughter, Elizabeth, who was married to the Earl of Glasgow, John Boyle, and the house and estate passed to the couple, who were reponsible for the remodelling work. When Elizabeth died in 1791, Halkhead passed to her son the 4th Earl of Glasgow. In 1815, the title Lord Ross of Hawkhead was granted to him. In 1886 the Hawkhead estate was sold by the 6th Earl, and a series of owners followed. The house was converted into a hospital in 1914, and was part of Hawkhead Mental Asylum. Eventually, when no feasible use could be found for it, it was demolished, although photographs of the mansion can still be seen today.