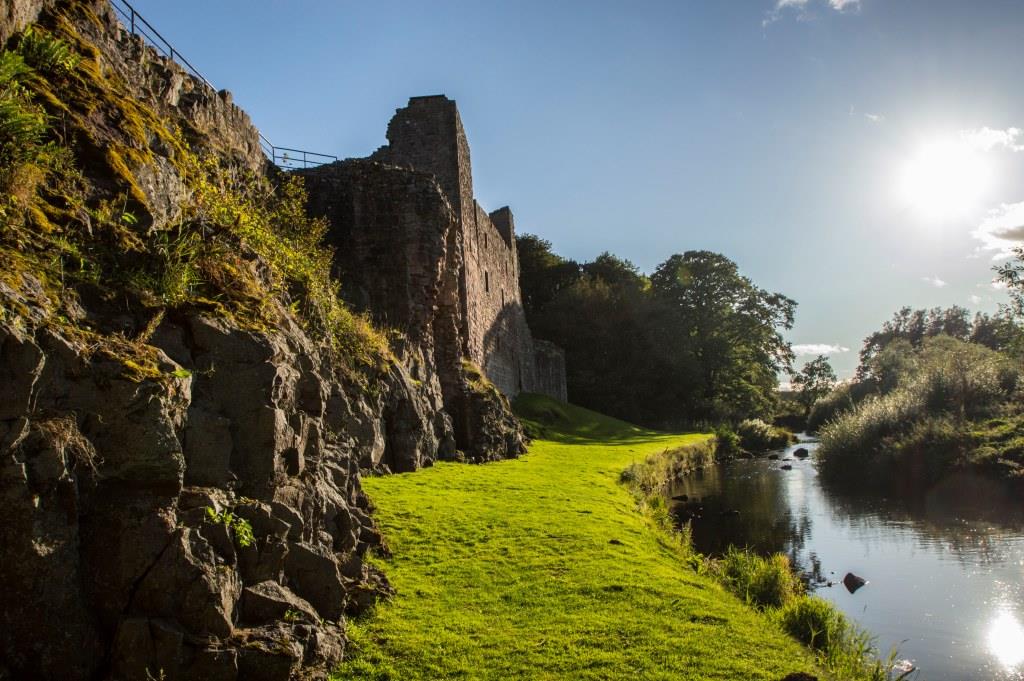 Hailes Castle is a ruined castle which occupies a small meadow at the junction of the Old Hailes Burn with the River Tyne in Lothian. Access to the castle is through a small public park area and the castle is open from dawn to dusk and is free of charge to enter. It consists of two separate courtyard areas with towers, and a tower-house at the western end of the site. It is a beautiful and tranquil site to visit.

The lands of Hailes were part of the Earldom of Dunbar, and the earliest phase of the castle, probably 13th century, may well have been erected by the Earls of Dunbar, and occupied by the Gourlay family in the 14th century after the Earls granted them the lands. They Gourlays were forfeited by King David II and the estate was granted to the Hepburns of Hailes, and later of Bothwell. The Hepburns were most likely responsible for the tower house at the western end of the castle, as well as the hange in the centre which was erected above the site of the old tower or hall of the Gourlays.

Hailes Castle does not appear in the accounts of the Wars of Independence, but it was attacked twice in 1400 by the Earl of Dunbar and his English ally Henry Percy, who were put to flight by an unexpected assault by the Master of Douglas. In 1443 Archibald Dunbar was more successful, who captured the castle and put the entire garrison to death. During the reign of Queen Mary, Lord Borthwick was commanded not to hand the castle over to the rebel Earl of Bothwell, who was the owner at the time. Following his forfeiture, the castle was granted to the unusually named Hercules Stewart, and later to the Setons. During the 17th century, the castle was amongst property damaged by English troops billeted there from Cromwell’s army, and may have been in a state of disrepair when Hailes was sold to David Dalrymple.

By the 19th century, the castle had long been abandoned as a residence, and its primary function was a granary; presumably the vaulted storage areas under the hall were still a place suitable for this purpose. The Dalrymples, Baronets of Hailes from 1701, had purchased Newhailes House in 1709 (Now in the care of the National Trust for Scotland), but it is not known where they lived before this date given that the castle had probably been damaged prior to their purchase. It may be that the first Baronet never lived there, but just owned the estate. Hailes later passed to the Earls of Balfour, who handed it over to state management in 1926.