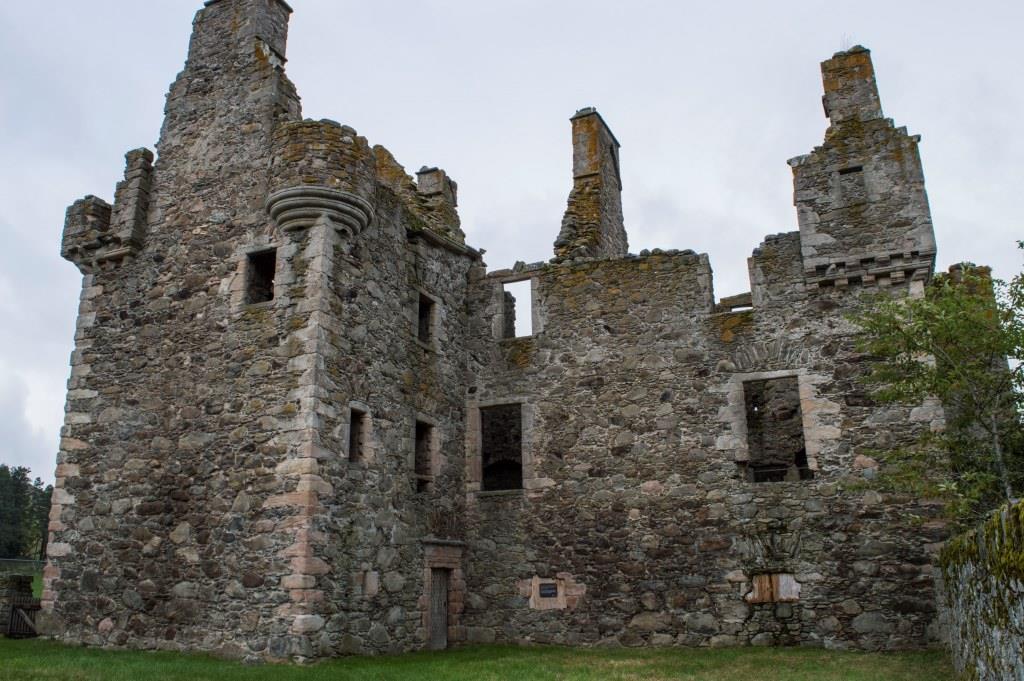 Glenbuchat Castle is an excellent example of a Z-plan tower house of the 16th century, and is largely unaltered from its original plan of a central rectangular hall block and two diagonally opposed corner towers. It is built on a hillside overlooking the junction of the Water of Buchat with the River Don. Unfortunately at the time of writing it has been closed for safety reasons for a couple of years, with falling masonry.

Glenbuchat was originally part of the Barony of Kildrummy, but became Crown lands in 1457. Parts of Glenbuchat were granted to Alexander Elphinstone in 1507, and in 1572 the 4th Lord Elphinstone sold Glenbuchat to John Gordon of Cairnborrow. By 1590, when John Gordon married his second wife Helen Carnegie in that year, he recorded the event with a carved lintel over the main entrance doorway in the north tower, showing that the castle was built between 1572 and 1590. The north tower contained a guardroom and the main stair to the first floor, and a doorway led into the corridor in the basement of the hall block, which contained two vaulted cellars and the larger kitchen, with a massive fireplace. A further vaulted room in the basement of the southern tower was used as another store for the kitchen.

A small stair from one of the cellars led straight to the great hall above (divided at a later date) – presumably this was the wine cellar. The southern tower contained a withdrawing room. At this level two turnpike stairs in turrets supported by arches provided access to the second floor bedrooms and attic. Several of the corners of the building were crowned with small watch turrets, some round and some square.

Glenbuchat was inherited by John Gordons 2nd son Adam, and his descendants sold the estate to the Gordons of Knockespock in 1701. The castle was partly roofless and uninhabitable by the 1730s, when the famous Jacobite “Old Glenbucket” sold the estate to Duff of Braco. The castle remained derelict but was repaired in 1901 before it was handed over to the state in 1946. Today the castle is in the hands of Historic Scotland, and was free to enter prior to its closure due to falling masonry. It is not clear when the castle will be reopened to the public.