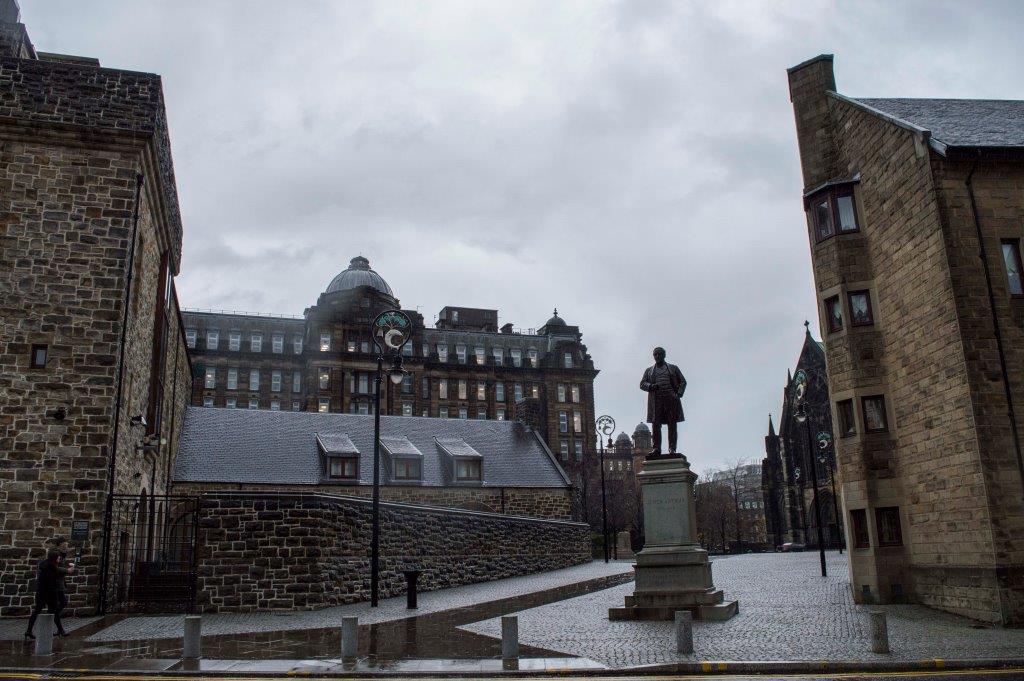 Glasgow Castle was built on a low rise of ground to the west of St Mungo’s Cathedral. The site of the castle is not precisely known, not least because there appear to have been more than one incarnation of it, but it is believed at times to have covered parts of Cathedral Square and to have stretched as far north as the grounds of the Royal Infirmary.

There was a castle at Glasgow in the 13th century, and it first appears on record in 1258. Excavation in the 1980s revealed that the layout of the castle was that of a low mound within a substantial ditch, which is typical of castles built in the late 12th or early 13th centuries. The town of Glasgow was made an episcopal burgh of barony in 1170, which seems a reasonable date for the establishment of the castle. In addition to the castle, a Bishops Palace, described as being “without” and “beyond” the Castle of Glasgow was in existence by 1258. This would not be unusual as there would have been a need for the Bishops representatives to carry out baronial duties associated with justice and law which would not have been appropriate to do within church lands. The castle would have served this purpose as well as a secure defensive place in times of trouble, and remained in service until at least 1301, when Edward I garrisoned it with English soldiers. It is possible that the castle was taken by William Wallace in 1297 and sacked, although this may also be a reference to the palace.

In the 1430s, a large and impressive tower house was built within the palace by Bishop Cameron, and the location of this tower is marked by a plinth in the square between the Cathedral, Hospital, and modern museum. This was further extended by Archbishop Beaton with a second tower in the early 16th century, and a monumental gatehouse by Archbishop Dunbar in 1544. In the same year the castle was besieged by the Regent Arran, and in 1571. In both cases the castle was garrisoned by men loyal to the Earl of Lennox.

Despite repair works by Lennox in 1598, by 1611, the castle had fallen into a state of disrepair, and in that year was restored by Archbishop Spottiswoode. It survived the Covenanting period intact, and was still in use in 1659, but in the 1680s further work was required by Archbishop Ross. The castle was then abandoned, and was used as a prison during the 1715 Jacobite rebellion, with 350 prisoners. By 1727 it was being used as a quarry for building materials, although some pictures do survive to show its appearance. In 1789 the site of the palace was cleared to allow the construction of the Infirmary, and in 1853 the castle mound was levelled revealing the ditch and drawbridge, as well as the site of four oak piles suggesting that the gate tower of the old castle was made of wood. Excavations since have focussed largely on the site of the palace, confirming the layout depicted by the early drawings. Access to the site is simple, but there is nothing of the castle or palace left to see.