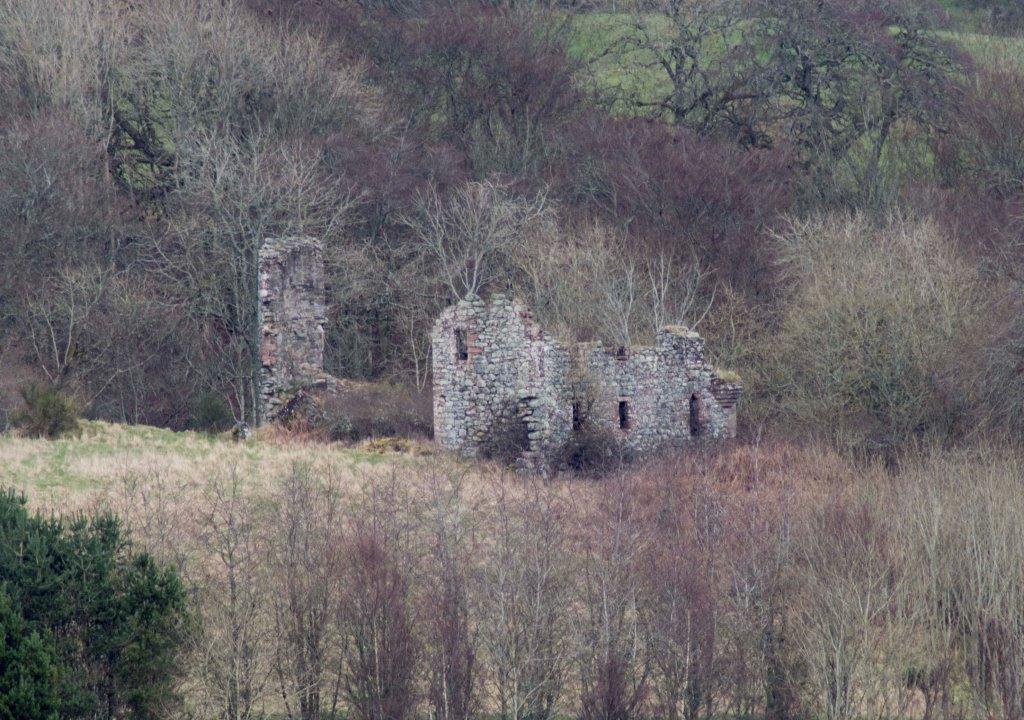 Glasclune Castle is built upon a south facing slope overlooking the Lornty Burn, a tributary of the River Ericht, a few miles to the west of Blairgowrie in lowland Perthshire. Immediately to the north and east is a steep slope dropping into the Glasclune Burn, which surrounds two sides of the castle. A short distance to the west is the Mains of Glasclune, a working farm which is presumably the landowner. The castle is in a poor state of repair and access through the farm is required to get to it. The other side of the burn at a distance of about 400 metres is the site of Drumlochy Castle, of which very little survives.

The lands of Glasclune were held by Thomas Bissett of Upsetlington in Berwickshire in the 1360s, who granted them to his wife Isabel in liferent in 1362. However after Thomas’ death, in 1370 King David II granted them to John Heryng, and the lands (which were held in barony) remained in the hands of the Herings throughout the medieval period. Glasclune was the site of a battle in 1391, when some of the sons of Alexander Stewart, Earl of Buchan, came into the area and killed the Sheriff of Angus here. It was not until the early 17th century that the estate passed out of the hands of the Herings, with the escheat of George Hering in 1615. His father Sir David was still alive in 1623, but having granted the estate to George upon his marriage, the estate had gone beyond his reach, and in that year the lands were granted to John stewart. They were soon in the hands of Thomas Tyrie of Drumkillo, and passed with the marriage of his daughter Isobel to James Blair. The Blairs remained in possession of the estate until they were forfeited after the 1715 Jacobite Rising. they regained possession briefly in the later 18th century, but in 1762 the estate was granted to John Campbell. By this date the castle was probably ruined as it is not shown at all on Roy’s map of c1750. Unfortunately records are rather silent about events at the castle.

Glasclune Castle was a property of unusual design, and has been dated to approximately the year 1600, and it appears on Pont’s map of Strathardle. The walls are less than a metre thick throughout, with no evidence of vaulting. To the south was a small two storey block of two rooms with a round tower projecting northwards from the centre of the building. This contained both the entrance doorway and a stair to the upper floor. On the south-eastern corner of this building was a corbelled round turret. To the east of this was a 25 metre long building, now completely vanished, which had a round tower on the north-eastern corner. In the angle between this tower and the long building was a turret containing a secondary winding stair. Both the round tower and the turret were three storeys high, indicating that this building was the taller of the two and was probably the original tower house. Pont does not show the lower building to the south, just a tall tower and adjacent hall block, suggesting the round tower and at least part of the long block predated the southern wing. A sketch of the building in the 19th century can be found in V4 of MacGibbon and Ross’ “Castellated and Domestic Architecture of Scotland” – since the building has deteriorated since this date it is worth looking at. The earliest Ordnance Survey map of 1863 shows a walled garden to the south, and a couple of features in the depiction of the river cliff which may indicate there was a curved courtyard defended by a ditch to the south and west of the house, and it seems possible that this may have also housed an earlier defended manor serving the barony, but no evidence of this is known.