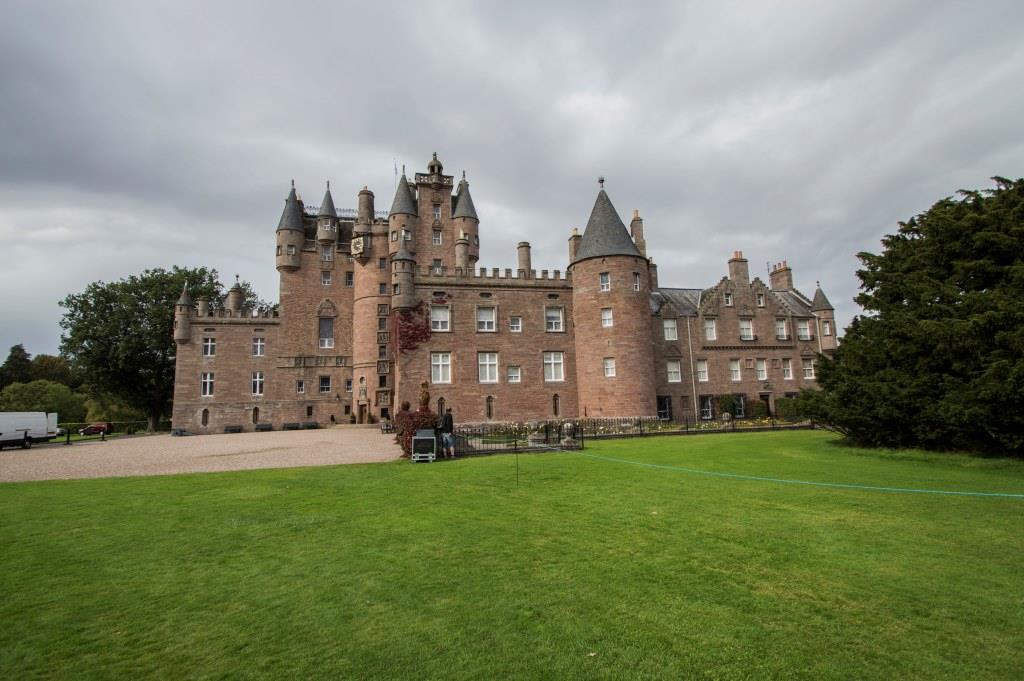 Glamis Castle is one of the most famous castles in Scotland. With close links to the royal family – in particular the Queen Mother – it has been extended to form an enormous mansion, with the old castle at its heart. The profile of the castle is instantly recognisable, with castellated wings, towers and turrets galore.

Glamis was a royal Thanage in the 13th century, meaning that the lands were managed by a subordinate appointed by the King. The lands were not held heritably, and the office of Thane was a profitable one which could be given or taken back by the King at his pleasure. In 1358, it was held by the Countess of Wigtown, and in 1364 by John Logy. In 1372, King Robert II granted the lands of the Thanage to John Lyon – in barony. John Lyon held the land in return for the service of one archer, not as a Thane.

It is therefore extremely unlikely that any castle was built here prior to the grant of the land to Lyon. As a former royal estate, it is likely that a hall of some description was here, but this was probably of timber and within earthwork defences. The site of the castle on a piece of land flanked by the Glamis Burn and Dean Water suggest that water may have played a part as well, probably there was a wet moat. In fact, an account from 1871 says that there were three ditches originally, filled up in the 17th century.

John Lyon was one of the higher rank of nobles in the land in the 14th century. He was the Keeper of the Privy Seal, keeper of Edinburgh Castle, and Chamberlain of Scotland. He married the daughter of King Robert II, and was knighted in 1377. It would certainly have been possible given his position for him to be wealthy enough to have built a castle at Glamis. However, in November 1382 Lyon was murdered by Sir James Lindsay, and in 1388 the King took young John the heir into royal protection, his lands removed from the jurisdiction of his stepfather, James Sandilands back to royal control.

John the younger would have come of age about 1398, but little is known of his career. He lived until about 1435 to be succeeded by his son Patrick, created first Lord Glamis in 1445. It is almost certainly the case, therefore, that it was the second John or Patrick who built the large L-shaped tower house at the heart of Glamis Castle. The main hall block of the tower consisted of three large single rooms, probably all vaulted, and a top floor which would have been divided into smaller chambers. To the south was a square wing which again was only a single room. It is likely that the entrance was via a staircase or ladder to the first floor hall, and that the tower house formed one corner of a rectangular courtyard.

It is likely that the castle remained largely in this form through the 15th and most of the 16th centuries, although buildings in the courtyard would have flourished, and the tower would have become more decorated. After Patrick died without children in 1486, he was followed in quick succession by his brother John as 3rd Lord to 1497, John’s son John as 4th Lord to 1500, and John junior’s son George as 5th Lord to 1505. George was succeeded by his brother John who lived as 6th Lord until 1528.

The 6th Lord was married to Janet Douglas, sister of the Earl of Angus. She was accused of poisoning her husband, as well as of treason against the King, who hated Angus with a passion. Although the charge of poisoning John Lyon was dropped, in 1537 Janet was convicted of planning to poison the King, and then of witchcraft. In July of that year she was burned at the stake on the esplanade of Edinburgh Castle. Her son, the 7th Lord, was forced to watch, aged perhaps 16.

John the 7th Lord had also confessed to being part of the conspiracy and was forfeited, with Glamis going to the Crown, but in 1543 this was reversed and he gained his estates back again, but was only to enjoy them until 1558, when he died. He was succeeded by his son John the 8th Lord, who was involved in the murky politics of Queen Mary’s reign, being a supporter of the marriage to Lord Darnley, and an assistant in the overthrow of Bothwell. He later became a close advisor of the Regent Morton. In 1578 the 8th Lord was shot in the head during a drunken streetfight with the Lindsays, leaving a young son Patrick to succeed him.

It is to Patrick that we must assign the first, and huge, reworking of Glamis Castle. An inscription over the door of the central stair tower reads “Built by Patrick, Lord Glamis, and D Anna Murray”. This places the building of the tower before 1606, when he was made Earl of Kinghorne, and no longer used the title Lord Glamis. The image of Glamis drawn by Timothy Pont also shows a second building to the right of the main tower, which we can assume is the south wing. Although the footprint of the south wing is similar in size to the main tower, it is only half as high, but it would have added significantly to the space within the castle. This would have necessitated removing some of the courtyard wall.

Also spread across the walls are monograms of Patrick and Anna, and the date 1606, recording his raising to the title of Earl. It is likely that at this point a considerable amount of rebuilding work and aggrandisement also took place, particularly at the top of the building. That Earl Patrick did not live to see the completion of his plans is also known; the monogram of his son John the 2nd Earl appears over a window high up on the west side. It was Earl John too, who completed much of the internal redecoration; the plaster ceilings in the new wing and in the great hall bear the date 1620, and a monogram belonging to Earl John and his wife also appears in the great hall. Earl Patrick died in 1615, his son Earl John in 1646. However the growth of Glamis had not finished yet, even after 40 years.

Further work was carried out by the 3rd Earl, another Patrick. He added the iron balustrades at the top of the tower, which was presumably now complete, and erected a second wing to match the southern extension of his grandfather in the north-west corner. This also meant the removal of older courtyard buildings, perhaps suggested by Pont in his drawing, although it is not clear. This wing was taken down in the late 18th century – as shown in sketches by Grose dated 1790 and has been rebuilt. Grose’ drawing also shows a wing to the rear of the castle of two storeys, which is clearly of comparatively recent build.

A good description of the interior of the castle can be found in MacGibbon and Ross’ Castellated and Domestic Architecture of Scotland Volume 2, which I will summarise here. When I visited Glamis it was just before closing time, so I didn’t take the tour! Entering the round tower, a set of stairs leads down to the vaulted basement of the hall block and from there to the old castle kitchen. A stair within the thickness of the wall probably led down to this level originally. The whole of the first floor is taken up by the vaulted hall, and a withdrawing room above the kitchen in the wing. Curiously there is no fireplace serving this hall, but there are a number of small rooms in the thickness of the wall, and the original main entrance has also been lost. Presumably one disappeared with the erection of the great stair tower.

The second floor contains the Great Hall, and the main fireplace here is in the south wall above one of the mural chambers below and next to the stair tower. In the north-west corner is a spiral star in the thickness of the wall. Above this is the floor of bedrooms above the hall, and these contain the turrets. It is clear that the wing of the tower house was a floor higher than the hall block, containing a watch house at the top, but the roofline has been altered to allow rooftop walks across the whole of the tower.

MacGibbon and Ross also contains a number of illustrations dating from before the large extensions eastwards, including one which appears to show what may be the original doorway into the castle. If this is the case then the entrance was to the east, a view now not possible for the public to see. It is well worth a read, although it should be noted that the references to Slezer and Theatrum Scotia should be ignored, since the drawing referred to has since been identified as Dalkeith, not Glamis.

You will notice that I have made no mention of MacBeth. Although it is the case that MacBeth was a historical King, and a very powerful and successful one, it is unlikely that he had anything to do with Glamis. The office of Thane did in fact start in the 11th century, and Glamis certainly fell in the centre of the Royal heartland of Scotland at this period, so it is possible there was a Thane of Glamis in MacBeth’s time. However, MacBeth is unlikely to have held this position, being historically from Moray, and defeated Duncan at “Bothgowan”, commonly identified as Pitgaveny, a short distance from Elgin.

I have also avoided mention by and large of the later history of the castle, which had become the private home of a major landowner by the time the 3rd Earl died in 1695. During the Covenanting period, the Earls of Kinghorne were steadfast in their support of the Stewart monarchy; John Graham of Claverhouse being a good friend of the 3rd Earl. This position continued into the 18th Century, with the 5th Earl (another John) being killed at the battle of Sheriffmuir in 1715 fighting for the Jacobites, and the Old Pretender staying at Glamis in 1716. The 6th through to the 8th Earls were all brothers of the Jacobite Earl John, but Earl Thomas the 8th Earl did not rise in the ’45, playing host to the Duke of Cumberland on his way to Culloden. Earl Thomas died in 1753, to be succeeded by his son John, who married Mary Bowes; their children were the first Bowes-Lyons. The Queen Mother was the 4 greats grand-daughter of this Earl John.