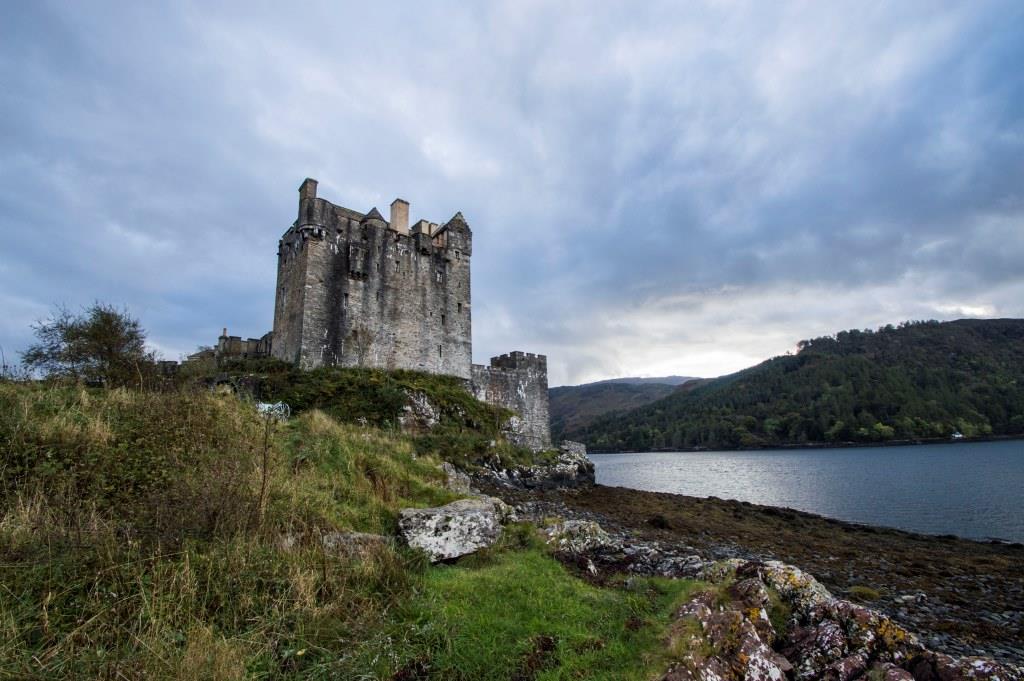 Eilean Donan has been the site of a castle since the 13th century, and at its conception was a fortified island, with a stone courtyard wall enclosing almost the entire island. It is sited in a wonderfully romantic location in the Highlands, which combines mountains and lochs to create a compelling location for tourists. The castle today is a much reduced version of the earlier castle, and has been extensively restored and rebuilt.

The 13th century castle was built at a time when Scotland had experienced an uneasy but lengthy period of peace with its neighbours. When Alexander III took control of the throne, however, he triggered an invasion by the King of Norway when he sent the Earl of Ross to Skye and then to the Isle of Man with an army in 1262 to impose his authority on what had historically belonged to Norway.

In the build up to this, many castles – especially on the coast – were strengthened in both garrison size and design, and it is believed that the early castle at Eilean Donan was built in response to threats from Norway. Certainly the location is strategically very strong, and defends the pass to Ross and Inverness. However, as it is the case that Alexander II had been attempting to resolve the issue of supremacy over the Isles as early as the 1220s, it is possible that the castle was built to defend not against the Norwegians, but rebellious Islesmen who were keen to avoid the supremacy of either King.

Be that as it may, this early castle was strongly fortified. It had two large and strong towers, one on a knoll which forms the summit of the island, and one with walls 4.3 metres thick a short distance to the north. The foundations of this tower can be seen today. A smaller tower lay almost due east of the modern tower house, now barely discernible, and a fourth, little more than a watch tower really, was on the small grassy height to the south west of the castle today. Two gates have been identified, both facing the sea. One was between the two large towers, the other was a sally port next to the watch tower.

A 16th century description recalls a tradition that the castle had seven towers; perhaps two more and a lost gatehouse faced the shore, and another stood at the southern corner of the extant courtyard. It may even be that the site of the main tower today was used for a hall building, and that two towers faced the sea instead, leaving the large northern tower as the “keep”.

By the late 13th century the castle was apparently held by one Kenneth Mackenzie, who may have been a nephew of the Earl of Ross. The castle was visited by the Regent’s “Crowner” in 1331, and 50 “misdoers” were executed there and their heads placed on display. The officer in question may have been the Earl of Ross, who issued a charter in 1342 for all the lands of Kintail including the castle to Reginald, son of Roderick of the Isles. Ross was to date a charter at the castle in 1350.

Earl William of Ross and his family were targets of King David II because of their support for Robert the Steward in the 1360s and 1370s, and the Earl was ultimately forced to hand over his Earldom to his son-in-law Walter Leslie. After the King’s death in 1372 the Earl forcibly claimed his lands back, and it may be that Eilean Donan was sacked at this time. There are, however alternative dates.

In the early 15th century the MacDonald Lords of the Isles also became Earls of Ross. They clashed with the Crown, and in 1428 the Earl, along with the chief of the Mackenzies of Kintail and other Highland chiefs, were arrested by the King at Inverness and imprisoned. Although they were soon freed, such treatment could not be borne, and the following year the Earl rebelled.

Two battles were fought in which the King was victorious, and in late 1429 he appointed his cousin the Earl of Mar to mop up the remaining rebels. The power of the MacDonalds had been broken, and it may be that Eilean Donan was destroyed in this process and not earlier.

The castle was certainly rebuilt to a much smaller plan, but this could have taken place in any number of violent events between 1296 and 1430. This smaller castle would have consisted of the tower-keep on top of the knoll, and a small courtyard, possibly with a second, lower tower diagonally opposite the tower-keep. A single gate entrance faced the shore – possibly at first floor level.

The next confirmed mention of Eilean Donan is in 1503, and it is again conflict with the Crown that raises the profile. The castle was occupied by Hector Mackenzie, and assaulted by the Earl of Huntly on behalf of the Crown. It was held briefly by Huntly before being taken by the Mackenzies again. Eilean Donan was assaulted by the MacDonalds in 1539, unsuccessfully, and again in 1541, this time apparently with more success since a document records its “treasonable burning”.

The description of Eilean Donan in 1590 is as follows (I’ve updated the spelling!) – “The castle of Eilean Donan is composed of a strong and fair dungeon (keep) upon a rock with another tower encompassed with a fair barmkin (courtyard) wall with orchards and trees all within an island of the length of two pair of butts almost round” indicating that the island was planted as an orchard. The description suggests that a second tower did indeed exist at the south-west corner at this date.

The Mackenzies had for some time based themselves at Fortrose, at Chanonry Castle, but when they became Earls of Seaforth in 1623, they built a new castle at Brahan, near Dingwall. They had left Eilean Donan to be occupied by constables, amongst whom were the MacRae family, and in the early 17th century the Vicars of Kintail.

In 1654 Eilean Donan was garrisoned for Parliament. It was abandoned when the garrison fell out with the locals, and the commanding officer killed. By this time two buildings had probably been erected within the courtyard, a small house with a round stair turret overlooking the courtyard, and an L-shaped building on the site of the south-west tower. This latter may in fact have been an extension of the tower with a single storey building along the sea wall.

A large “hornwork” ending in a six-sided tower and enclosing a narrow triangular courtyard was erected outside the castle, creating a barbican for the entrance gate. A new gate entrance had been placed in the southern all of this hornwork, the purpose of which is unknown.

A survey in 1714 shows that the only building which had a roof at this date was the small house with the round tower, and shows that the south-western tower took the appearance of an tower later adapted to become a 17th century styled tower-house. It also shows that the two towers had small corner turrets on all corners and crow-stepped roofs. The castle was garrisoned by government troops in 1715, but was taken by Jacobite rebels.

In 1719 it was seized by Spanish troops in a largely forgotten Jacobite rebellion. A powder magazine was stored in the “low building” to the rear, and another in the small house which had been the principle dwelling by the Spanish. Unfortunately the government heard of this, and two ships were sent up Loch Alsh. The castle was bombarded by cannon and a man was sent ashore to set fire to the magazines containing 343 barrels of gunpowder. The resulting explosion utterly destroyed the south-western tower, as well as the small house and the entrance gateways to the castle.

Eilean Donan then stood empty and ruined for nearly 200 years. Between 1912 and 1932, Major John MacRae-Gilstrap and his Clerk of Works, Farquhar MacRae rebuilt the ruined castle. The 1715 plan had not been found at that time, and so the reconstruction is not perfect, and in other areas, such as the reduction of the ground level in the courtyard and exposing of stone, they enhanced certain romantic aspects of the castle.

It is important to note that the main castle gate and entrance is entirely modern, as are all the buildings along the south wall. The sea wall has been largely rebuilt, as has the majority of the tower-keep. Inside the castle the vaulted basement and high-ceilinged great hall represent what the old layout would probably have been, with the only access being at first floor level into the hall. Upstairs the third floor is divided into bedrooms, exactly as it may once have been, although the layout reflects 20th century rather than medieval needs.

The recreation is magnificent all the same, and a stunning testament to the ambition and dedication of the two masterminds behind the restoration work. The historical associations of the MacRaes with the castle are largely circumstantial, but Eilean Donan is now the home of the Clan MacRae society, as is only fitting, and cannot be missed when visiting the Highlands.