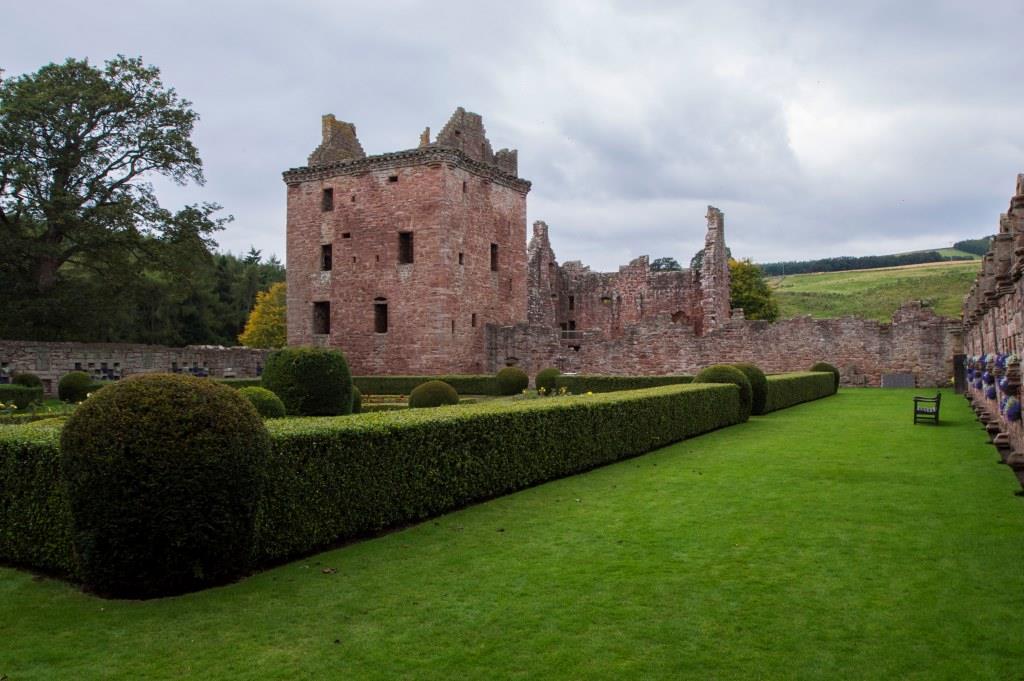 Edzell Castle is perhaps unfairly overlooked as it lies off the main tourist trail in Scotland. It is a few miles to the north of Brechin, and follows the classic plan of a large tower-keep in one corner of a rectangular courtyard, with domestic buildings around the courtyard. As such it is still a very interesting ruin. But the glory of Edzell is its walled garden, restored faithfully to 17th century plan.

Although it is not signposted, the old earthwork castle of Edzell lies a short distance to the south-west, opposite the churchyard. It consists of a large oval mound, separated by a ditch from the adjacent ridge, and was probably built by the Abbott family in the 12th century. In 1358 the property passed to the Lindsays by marriage, and when in 1381 Sir David Lindsay became 1st Earl of Crawford, it is certain that the old castle was strengthened. However, it was not until the early 16th century that the Lindsays elected to build a new castle at Edzell and abandoned the old dwelling.

The tower built for the 9th Earl between 1513 and 1558 was built with a slight projection to hold the main staircase, otherwise was an unremarkable rectangular tower within its courtyard. Ranges of buildings were planned for all four walls of the courtyard but those to the north were never completed. A grand entrance was built on the western side next to the tower, and once completed, the walled garden, with its extensive symbolism and carvings, was built.

The Lindsays fell into trouble in the 17th century, with mounting debts and an active involvement in the Covenanting cause, but Edzell Castle remained largely trouble-free. In 1715 the last of the Lindsays was forced to sell up, and the castle was stripped of its assets to be used as a garrison point in the 1745 Jacobite revolt. In 1764 the castle was stripped of everything valuable and left to decay. In the 1930s it was taken over by the state, and is now managed by Historic Scotland. The garden has been restored, and Edzell remains a beautiful and tranquil place to visit.