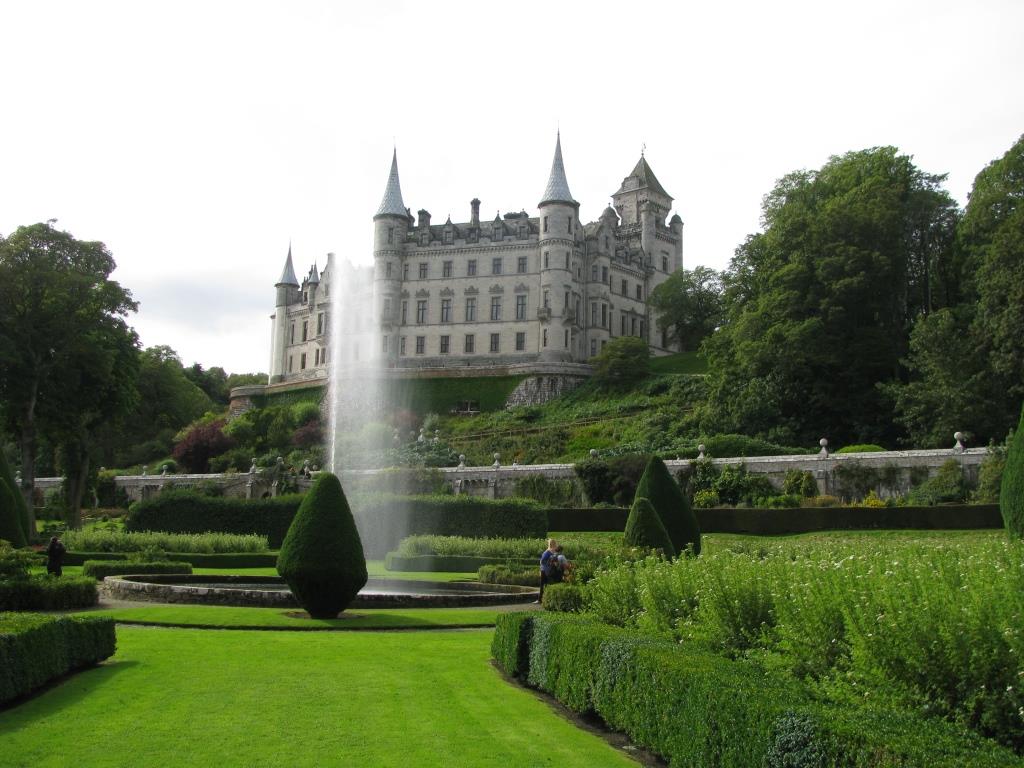 Dunrobin Castle is the ancestral home of the Dukes of Sutherland and has been the site of a castle since perhaps the 14th century. At its core is a 15th century tower house, later extended with hall blocks in the 17th century. However all this is hidden by the gorgeous fantasy castle erected in the mid 19th century, and extensive gardens.

The tower-keep, built by Robert de Moravia the 6th Earl before 1401, is vaulted on every floor, reflecting the lawless nature of the far north of Scotland in this period, and perhaps a paranoia about fire! This was almost certainly accompanied by a courtyard, which would have formed the basic outline for the 17th century mansion house when it was added. The whole site is on a steep slope looking down to the sea, and was probably defended by a ditch.

In the 16th century the de Moravia family line ended without an heir, and the sister of the last Earl became the 10th Countess of Sutherland. Her husband was a younger son of the Earl of Huntly, and from 1535 the Earls of Sutherland were members of the Gordon family. However she had a younger brother who felt he had been disinherited, and took the castle in 1518. The Gordons quickly retook the castle and beheaded the young de Moravia. In 1550, his son also attempted to take the castle, but was killed in the gardens. In 1562 John Gordon, the 11th Earl, was forfeited for supporting the Earl of Huntly in his treason against Queen Mary, and although he was reinstated, he was poisoned and died in 1567. After this period of conflict, the large courtyard house was added.

The 16th Earl chose to change his surname to Sutherland, and the Sutherland family still own the castle. They supported the government during the Jacobite period, although the castle was briefly held by Jacobites in 1746, when rebels took the castle by storm, the Earl escaping through a back door to flee to Aberdeen. The castle was extended in 1785, and then remodelled in Baronial style by Sir Charles Barry. A fire in 1915 when the castle was in use as a naval hospital meant that restoration was carried out to the 19th century work. Dunrobin castle was used as a school briefly in the 1960s, and has been open to the public since 1973.