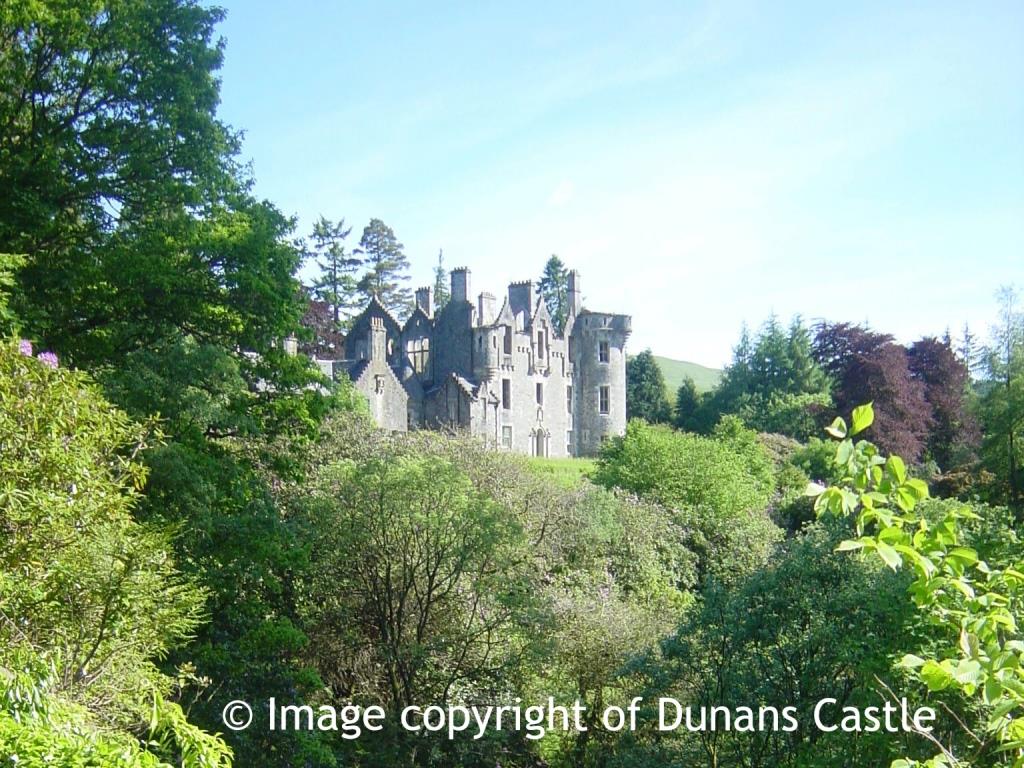 Dunans Castle is a derelict mansion which is built on the east bank of the River Ruel, which flows through upland Argyll into the Kyles of Bute. Although a property called “Dunen” was shown on Ponts map of c1590, this was not a fortified dwelling, and is likely to have been some kind of farmtoun. At this time there was a tower house of some description to the south at Garvie, but no indication as to why the rootword “dun” is part of the name of the property.

The mansion at Dunans is of two separate build phases. The earliest is an 18th century house which was built for Archibald Fletcher, who acquired this part of the Glendaruel estate in 1745, and the second a much larger Baronial style mansion which was added in about 1864, again for the Fletcher family. The first reference to Archibald as Fletcher of Dunans is in 1752, so it is to be assumed that the property formed the centre of his estate by that time. Laird Archibald was an associate of Rob Roy, but was not immune to his cattle rustling, and at one point the whistle of Rob Roy was kept at the house. The family were supporters of the Jacobite cause in 1745, and sent men in support, who were to fight at Culloden.

The mansion was extended for Angus Fletcher, who commissioned the work in 1860; apparently intended to look like the old family seat of Achallader, but as this was a 16th century tower house blown up in 1689, this seems to be family legend only. In 1997 the estate was broken up and sold, and after being run as a hotel for four years, a fire gutted the newer part of the building, and because fire safety warnings had been ignored, no insurance was forthcoming so the building was abandoned. The Dunans Charitable Trust is now the manager of the site, and the castle is part occupied by its new owners, and part derelict. The grounds are open to the public, and there is access to the front exterior of the castle to view progress on the restoration of the building.

Picture is property of and copyright of Dunans Castle, and used with thanks and permission.