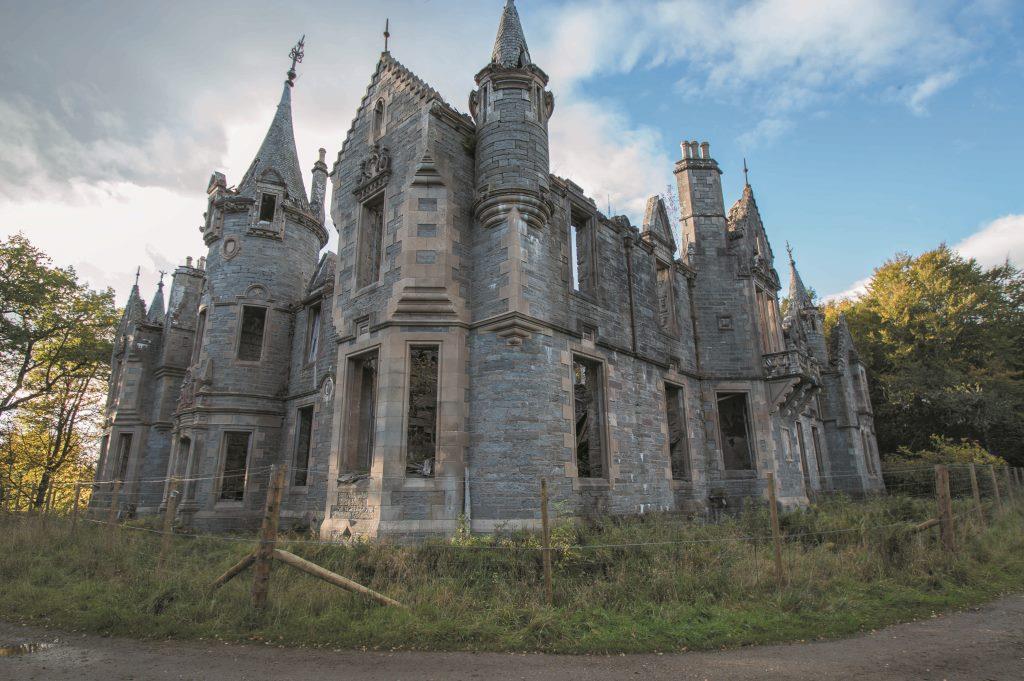 Dunalastair is a large ruined baronial mansion dating to the mid 19th century and occupying a prominent site (if now overgrown) overlooking the eastern end of Loch Rannoch, where the River Tummel leaves it. The site is actually a promontory site, and footpaths lead to it from the main road past the burial ground of the Robertson Clan. It is not signposted and is fenced off for safety reasons since the building is definitely in a dangerous condition. I have been advised by the estate to highlight that vehicular access from the B846 road is not permitted as the track is privately owned.

The house was built to a design by Andrew Heiton and son (clearly influenced by his time with the better known Burn and Bryce, who he worked for between 1842 and 1848) and is dated 1852. It consists of a large baronial mansion with a central round tower containing the main entrance door, and wings extending to the rear enclosing a central courtyard. It was occupied until 1952 and then abandoned; the owner is reported to have said that he would like to see the building restored, although this is going to be difficult to achieve since he is also reported as not wanting to see parts of the estate subject to adverse development (ie not able to be converted to flats or a hotel) and would probably want to limit the amount of land to be sold with the house. The majority of the roof has collapsed and the first floor joists are in a perilous condition as well – with the rest of the roof looking distinctly dubious, I am inclined to think the building will be a shell fairly soon.

Dunalastair House was built for General Sir John Macdonald of Dalchosnie, who purchased the estate from George Robertson, the chief of the Robertsons in 1853. He ordered the demolition of the previous house, Mount Alexander, which stood on or nearby the site of Dunalastair. Alastair Macdonald, his son, sold Dunalastair in 1881, and it was sold again in 1891 to the great grandfather of the present owner. After World War I there were insufficient staff available to run the house and estate, and it was requisitioned in World War II to be used as a school for Polish children. In the mid fifties it was abandoned, and the lead from the roof was stolen in the sixties, leaving the interiors exposed – the reason for the decay of the building to its current condition.

The previous house, Mount Alexander, was a large square tower in crenellated style with a central projecting bay, a turret accessing the roof, and small wings to either side. An image of this can be seen in “Modern Athens” by T H Shepherd (which can be downloaded from archive.org – only the pdf version has the picture). The principal public rooms are described in this as each being about 30 feet by 20, but little else is known of the building. This book was published in 1829, and states that the “present proprietor of the estate of Strowan was restored to the estate of his ancestors about thirty years ago, and in the beginning of this century, the present mansion, Mount Alexander, was commenced. It had been so named by his ancestor, the poet Strowan, whose favourite residence it had long been.” This indicates two things. First, that the house of Mount Alexander was believed to have been built c1800 by Alexander Robertson, the nineteenth chief of the Robertsons – or his father, also Alexander. It also highlights that the Robertson estates – which had been forfeited by the Jacobite activities of the 13th chief, known as the Poet, (and another Alexander Robertson) had not been in the family possession since 1745 – the poet chief had been forced to go into exile in 1715 leaving his sister to act as laird, and again in 1745 at which point he was forfeited. The previous house, which is referred to as The Hermitage on the Dunalastair Estate website, was destroyed by fire after the 1745 Rising. However, on the Roy map of c1750, the house is clearly labelled Mount Alexander, and is depicted in broadly the same place as Dunalastair today. It is to be noted that Shepherd states the usual residence of Alexander Robertson was at the western end of Loch Rannoch some fifteen miles away – the name of the house being unstated.

The history of Dunalastair is therefore fairly limited. I can find no reference to a residence of the chiefs of the Robertsons at Kinloch Rannoch prior to the Hermitage, although there are ring forts and other interesting features on the estate which could represent early dwellings of some sort – although they are unlikely to be high status. In fact what little evidence we have suggests otherwise. Certainly up to the mid 17th century their main seat was at Inverack, opposite to Blair Atholl and near to the old castle site at Struan. When Alexander Robertson the poet became chief of the family, it was 1688, just before the outbreak of the first Jacobite revolt. His mother wrote to his uncle from Carie, on the side of Loch Rannoch asking for help in dissuading Alexander from joining the Jacobite cause – and it is notable that Carie was the place that Alexander is said to have hidden up after the burning of his house. He spent time in exile between 1690 and 1703, and again between 1715 and 1726, when his sister had been looking after the estates for three years in his absence – the estate finances were in a poor state and they had been taken over by the government for a few years. He was rather ungrateful for her efforts, however, imprisoning her on Rannoch Island upon his return, and then sending her to the Western Isles, where she died the following year. Given the periods of exile, it seems most probable that the old house of Mount Alexander, Alexanders “Hermitage”, was built either between 1703 and 1715, or between 1727 and 1745. Despite being in his 70s, he supported the Jacobites in 1745 and led 140 men as far as Prestonpans before realising he was too old for war. The government chose not to exile him again, but troops took matters in their own hands in 1746 – burning the house of Mount Alexander, they also burned Carie and another of his houses in Kinloch Rannoch. Robertson chose to rebuilt Carie, not Mount Alexander, and died there in 1749, leaving his cousin Duncan of Drumachune to succeed him. Duncan was the grandfather of the Alexander who built Dunalastair House.