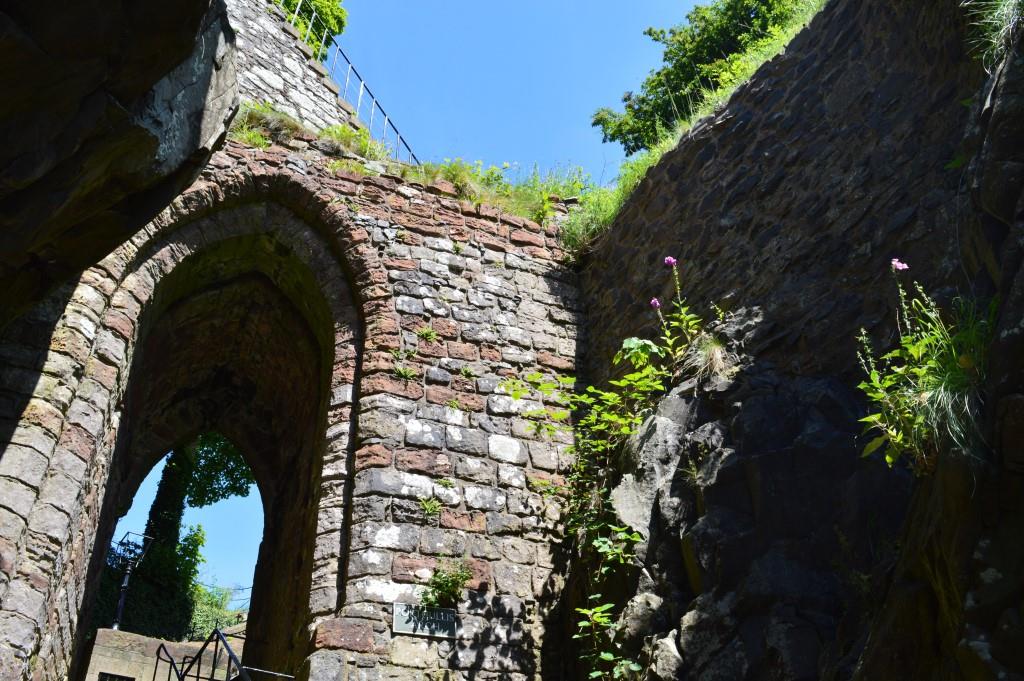 Dumbarton Castle is built upon the twin summits of a volcanic outcrop which is a prominent and obvious strongpoint watching over the meeting of the River Clyde with the River Leven. Fortified since at least the Dark Ages, it was the capital of the British Kingdom of Strathclyde for centuries, and became an important medieval royal fortress. Today, the remains mostly date from the 18th century, when the castle was refortified during the Jacobite period.

There are no visible remains of the old fort, and very little archaeological evidence, but a wooden palisade defended parts of the summit, and probably followed similar lines to the stone walls today. Perhaps a large hall crowned one or both of the summits, but there is no proof of this. The medieval castle was actually entered from the north, through a gateway which is now blocked up and was beneath what is now the Duke of York’s Battery. This was defended by a large tower, referred to as the Wallace Tower. The foundations of this can still be seen. Most of the old castle buildings lay in the low area between the two summits; the south entry was a postern gate, and the Portcullis Arch was the innermost of at least three layers of defence. On the top of the smaller, taller summit is the foundation of the White Tower, a round tower which may be of medieval date – or may be that of a later windmill.

The Kingdom of Strathclyde was incorporated into the Kingdom of the Scots in either the late 10th or early 11th century after a period of decline. The fortress had been attacked in 756, 780 and in 870, and Strathclyde was at War with the Scots in the 970s. The last King of Strathclyde is said to have died in battle in 1018. After this the history is vague until 1034, when we know it had become part of the bigger Kingdom. Dumbarton Castle itself does not reappear in the records until 1222, when mention is made of the new castle in a burgh charter. Previously held by the Earls of Lennox, and by Earl David, the brother of King William in the 1170s, it may be that the castle had not previously been kept in repair, but this seems improbable.

Once Alexander II had built his “new castle”, however, it remained an important royal stronghold, and changed hands between the English and Scots during the Wars of Independence. Although most castles were systematically destroyed by Robert the Bruce, Dumbarton appears to have escaped this fate, or its destruction was comparatively minor. The castle was the traditional safe point of departure for Scots nobility fleeing to France, and also became a bone of contention between the Crown and the Earls of Lennox; it was besieged twice by James IV in 1489, and used as a base from which to campaign against the Lords of the Isles.

Dumbarton Castle was strengthened further during the 16th and 17th centuries, with increasing emphasis on artillery; and the purpose of its existence changed; it became one of the primary state prisons. In 1639 it was captured by pro- and anti-royal forces, and surrendered to General Lambert in 1652 without resistance. It was in a poor state of repair by the Restoration, and repairs and improvements were only eventually carried out after the Jacobite Revolt of 1715. Several proposed sets of works can be seen on the website of the National Library of Scotland. The castle was not, however, to see action, and although further works were carried out to improve the castle for coastal defence in the 1790s, it had become largely obsolete and was abandoned by 1865. It is today managed by Historic Scotland.