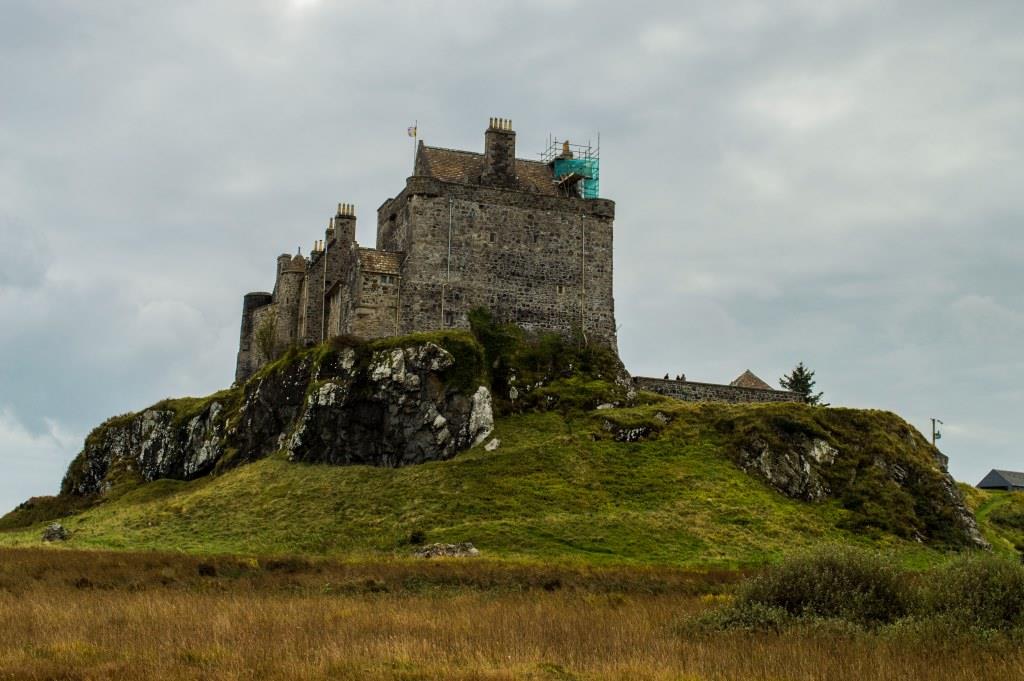 Duart Castle is on the Isle of Mull, and unless you intend to explore the island, the best way to visit it is as a foot passenger on the ferry from Oban, as a bus meets each ferry to take visitors to the castle. As roads are little more than lanes, it makes a trip much less expensive and stressful!

The castle is a simple walled courtyard occupying a rocky outcrop at the end of a peninsular. It dates from the mid 13th century, and this early castle was built by the Macdonald Lord of the Isles as one of a series of castles commanding the sea-lanes. It is, unusually, rectangular in shape rather than polygonal, and three sides of the courtyard are occupied by buildings, the fourth pierced by an arched gateway which is not original.

Within the courtyard the oldest building is the rectangular tower-keep. However this is on a lower part of the outcrop than elsewhere, and may have originally laid outside the defended area, or formed a secondary courtyard. Shortly after the castle and most of Mull were acquired by the Macleans, they elected to build new accommodation, and founded this tower. It should be noted that the inner wall of this tower was originally the outer wall of the Macdonald castle. This probably enabled the courtyard buildings to be modified, but these have been swept away by the erection in the mid 16th century of the south-eastern range.

At about this time, the original entrance was strengthened by the addition of a gatehouse, and the southern corner and part of the south-eastern curtain wall were also remodelled. A small postern gate at the northern corner was also taken out of use, and the platform outside it converted to be used as a small room with a gun-platform on the roof. In 1673 the north-eastern range of buildings were also rebuilt, and was garrisoned by troops of the Earl of Argyll, the Maclean lairds having lost most of their lands as punishment for their feud with the Macdonalds, and mortgaged Duart to the Campbells because of crippling debt.

The Macleans of Duart were finally forfeited in 1691 after fighting for the Jacobites, and the castle was reoccupied by a Government garrison until 1751. At this point it was abandoned and became derelict. In 1911 the castle and part of the peninsular were purchased by the 26th chief of the Macleans, who renovated the castle. Today the castle is under threat again from the uncompromising elements, and extensive repairs are again under way. The tower-keep and parts of the north-eastern range of buildings are open to the public, but access to other parts are restricted for the time being.