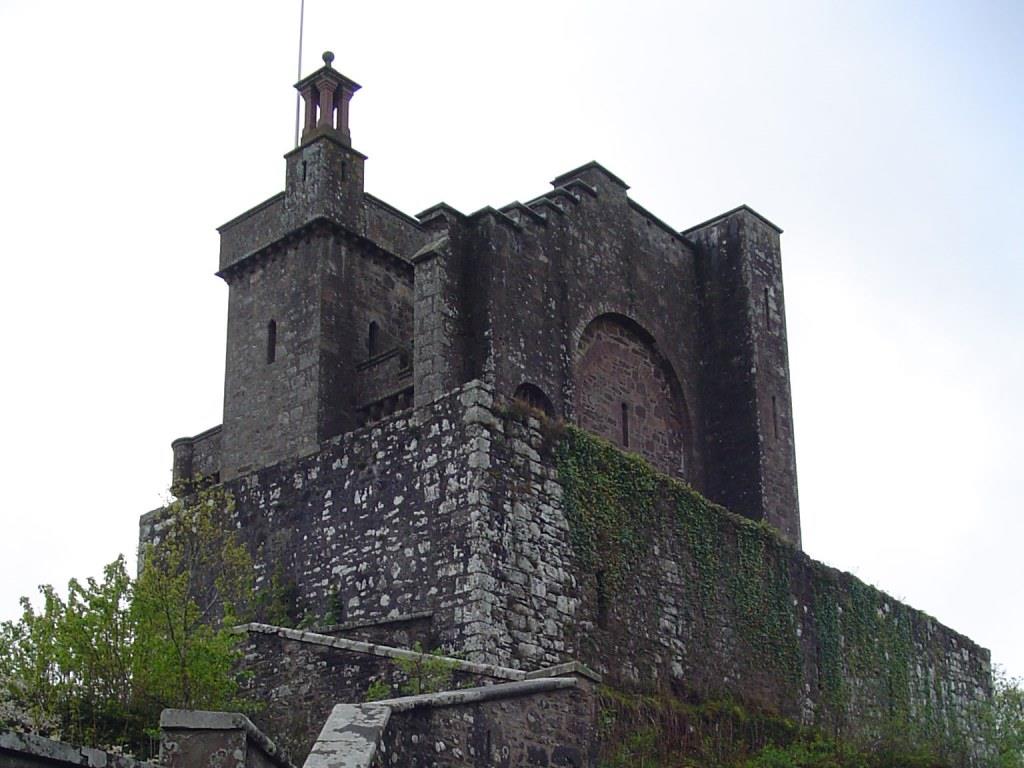 Drummond Castle occupies a narrow ridge between two streams in upland Perthshire. The castle consists of two main parts, the older of which consists of a single L-shaped tower, which presumably had an associated courtyard, and which was later extended with a gatehouse. The newer part is an 18th century mansion. These two parts of the castle are not open to the public, but are clearly visible from the spectacular restored Renaissance gardens below.

The Drummond family, based in the Lennox originally, were granted estates in Perthshire by Robert the Bruce after his victory at Bannockburn in 1314, but it was not until 1490 that the then Sir John Drummond was given a special license by King James IV to erect a castle on his newly acquired lands of Concraig, purchased from Sir Maurice Drummond. The castle he erected was undoubtedly the tall tower-house which is next to the entrance gatehouse today. This tower is entered at first floor level and contains a single room at each level, and a staircase serving all the upper floors occupies the small wing. To the east of this tower is a rectangular courtyard which probably follows the plan of the early barmkin wall.

The three storey gatehouse is an addition probably of the early 17th century, by which time the Lords Drummond had become Earls of Perth. A range of buildings on the north side of the courtyard only survive as ruins, but date to the same period; this may represent a development of the castle in to a larger mansion around the courtyard to reflect the status of the Drummonds as Earls. The Drummonds were constant Royalists, and it comes as no surprise that the castle was attacked and damaged by Cromwells men in the 17th century. The tower was damaged, and probably so were the surrounding buildings, which may be the reason for the building of the new house, which was started in 1689 by the 4th Earl, who was a close associate of King James II and VII.

In fact the 4th Earl was imprisoned following the deposition of King James, and was created Duke of Perth by the deposed King, although the title was not recognised at home. The Drummonds continued to support the Jacobite rebellions, and were ultimately forfeited in 1746, by which time the castle had been occupied by government troops during the 1715 Rising, and subsequently slighted. The house was restored in 1822 and extended by Captain James Drummond, and the upper storeys of the tower were rebuilt and raised in the 1840s by his grand-daughter. It remains the private family seat of the Heathcote-Drummond-Willoughbys, who restored the fabulous gardens in the 1830s. The gardens are open seasonally.

Photograph courtesy of and copyright of Ray Biggs