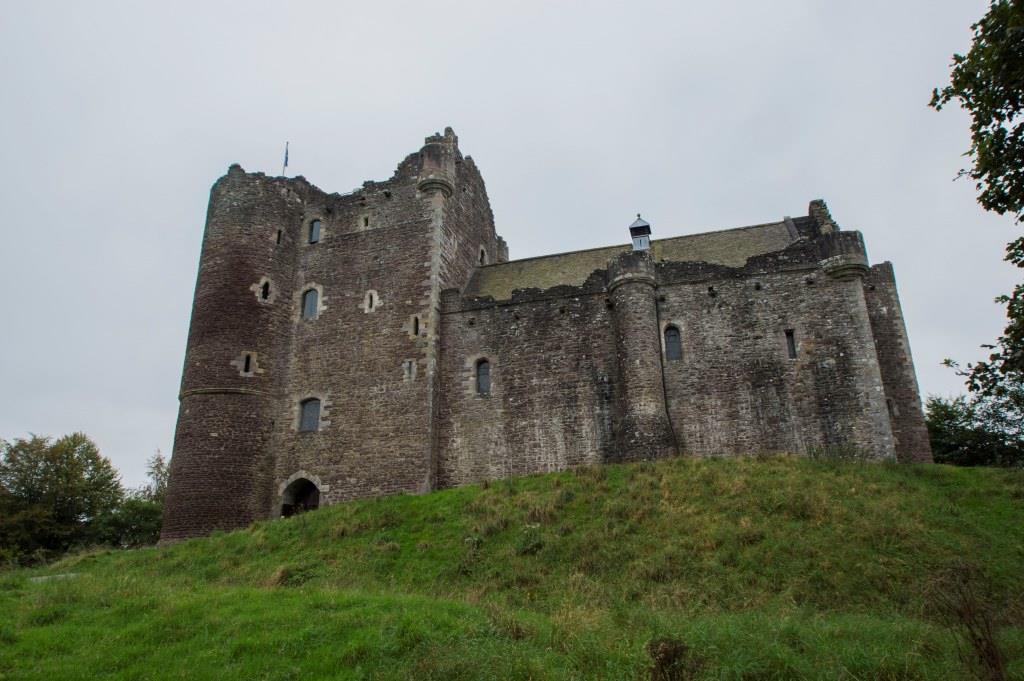 Doune Castle is a substantial ruined courtyard castle with an impressive 15th century domestic range and tower. It is maintained by Historic Scotland, and is perhaps most famous for being used as a film location in Monty Python and the Holy Grail. More recently it features in the Outlander TV series. However it was also one of the primary castles of Robert Stewart, Duke of Albany, who ruled Scotland on behalf of his father Robert II, his brother Robert III, and his nephew James I, and is therefore of huge significance for the historian, as well as for the Python fan.

The courtyard castle was built on a natural knoll between the Ardoch Burn and the River Teith, and it is likely to have originally been a castle held by the Earls of Menteith. In 1234 the death of Murdoch of Menteith left his eldest daughter Isabella as his heiress, and her husband Walter Comyn, Lord of Badenoch, assumed the title of Earl in her right. When Walter died, Isabella’s new husband was unable to resist the challenge of Walter Stewart, married to her younger sister Mary, and Walter took over the Earldom. The main castle of the Earldom, however (the island fortress of Inchtalla), was retained by the Comyns, so it appears likely that Doune was upgraded to become the principal Stewart residence from this period.

Their son Alan fought against Edward I at Dunbar in 1296 and was sent to the Tower of London for a brief period. He appears to have retired soon afterwards, and his son Alan assumed the Earldom from about 1306. His support of Robert the Bruce led to his being forfeited by Edward I, and John de Hastings was given his lands and title – as well as Alan when he was captured. Alan died in Abergavenny Castle in Wales perhaps in 1309. It seems likely that at this time the early castle of the Menteiths at Doune was destroyed, Alan’s son being a child and the castle granted to an Englishman, it was a prime target for Bruce and his men.

Doune Castle was rebuilt in the late 14th century by Robert Stewart, Earl of Fife and son of King Robert II. His wife was Margaret Graham, the grand-daughter of Alan, the child-earl above, and therefore Fife was able to claim the title Earl of Menteith as well. His new palace consisted of a large square tower-keep with a projecting round tower to one side; through the basement of this building ran the entrance passageway to the courtyard, and above this was the Duke’s inner hall. Adjacent to this four storey building was the block containing the Great Hall, above three vaulted cellars. These two buildings took up the whole of the north front of the castle. Surviving on the western side is the kitchen tower; other buildings took up the rest of the courtyard walls.

Albany, as Robert Stewart became, was a ruthless individual, and was happy to rule Scotland while his nephew remained prisoner in England. When King James was released, Albany had died, and his son Murdoch was ruling in his place. James executed Murdoch and annexed Doune to the Crown. As a hunting seat, Doune also became a royal dower-house for successive Queens of Scotland, but maintenance became an issue and the castle declined until 1580, when James VI commissioned considerable repairs.

Perhaps part of the problem had been caused by the siege of the castle in 1570 by the Regent Lennox, pursuing the keeper of the castle for his perceived support of the abdicated Queen Mary. The keeper, James Stewart, was eventually made Lord Doune, and when his son married Elizabeth, Countess of Moray, became Earl of Moray in her right. The title Lord Doune has remained with the Earls of Moray ever since. Doune Castle was occupied by Montrose during the Covenanting period, and a battle took place here in 1654, after which the castle fell into decline again, and repairs were required in 1689 when it was garrisoned against Jacobites. It was again held against the rebels in 1715, but in 1745 it was occupied by MacGregor of Glengyle for the Jacobite cause. The castle then fell into ruin, but had become a tourist attraction by the 19th century, so the 14th Earl of Moray began repairs. In 1984 it was donated to the state, and is now open to the public.