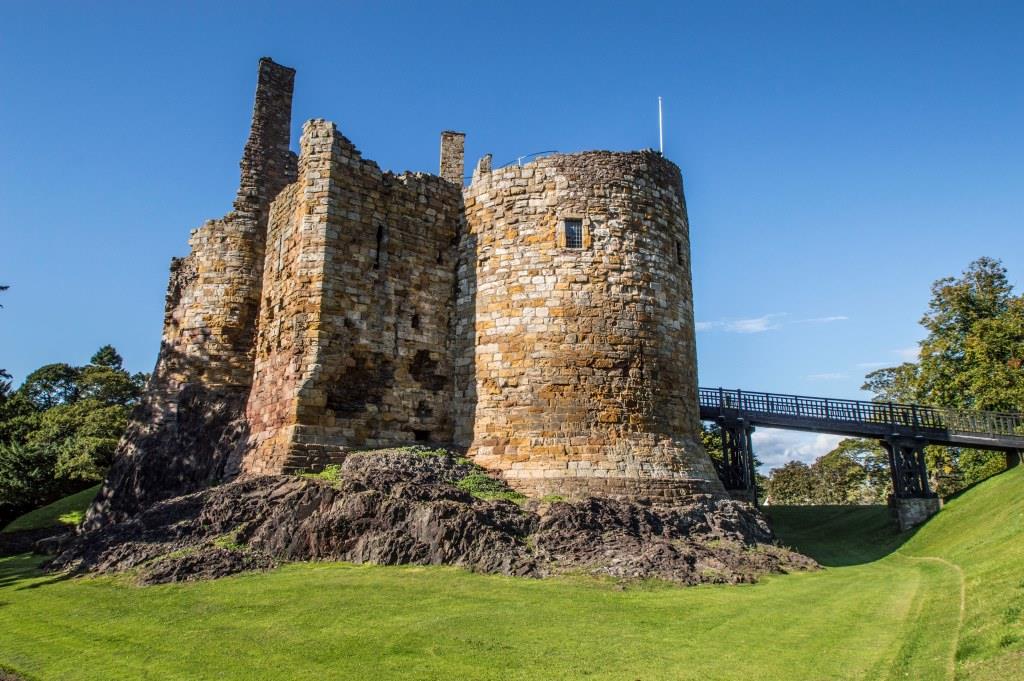 Dirleton Castle was built by the de Vaux family in the 13th century on a rocky outcrop in East Lothian, roughly in the middle of the Barony of Dirleton which had been granted to them in the reign of David I. Originaly a courtyard castle defended by a rock-cut ditch and a cluster of towers, a substantial hall block was added by the Haliburtons in the 14th/15th century, and this was in turn improved by the Ruthven family in the 16th century. Managed by Historic Scotland, the castle also has extensive gardens laid out in 16th century fashion.

The entrance to the castle was via a flying bridge to the gatehouse, as reconstructed today, and the approach was dominated by the three towers of the de Vaux dwelling, which included a large round tower, a small square one adjacent, and a third, small round tower further around. This dwelling occupied the southern corner of the courtyard, which was four sided. Two further round towers guarded the eastern and northern corners, whilst the western corner had no tower.

In 1298 this castle was besieged and taken by the Bishop of Durham, trusted deputy of King Edward I of England. The castle was retaken by the Scots, and again by the English in 1306. By 1314 it had been taken by the Scots again, and in the wake of the victory of Bannockburn, King Robert ordered the castle be destroyed; the northern and eastern towers at least were demolished and their foundations can still be seen today.

By 1350 Dirleton had passed by marriage to the Haliburton family, and they elected to build a large family dwelling along the east side of the castle, incorporating a kitchen tower, the enormous cellars, a great hall, and a tower house at the northern end which rose to five storeys high above the basement prison cell. The family fortunes declined after the fall of their patrons, the Douglases, in the mid 15th century, and in the 16th century the estates were split among three heiresses.

Dirleton Castle passed to the Ruthven family, but after the execution of one of them in 1584, the castle was forfeited. By 1586 it had been restored to Lady Dorothea Ruthven, but when she died in about 1605 the castle faded to obscurity, and became a garrison for Scottish troops by mid-century. A force of 1600 men were despatched by Cromwell to put an end to their raids on his men in 1650, and the castle was taken in a day with cannon. The castle was then largely abandoned.