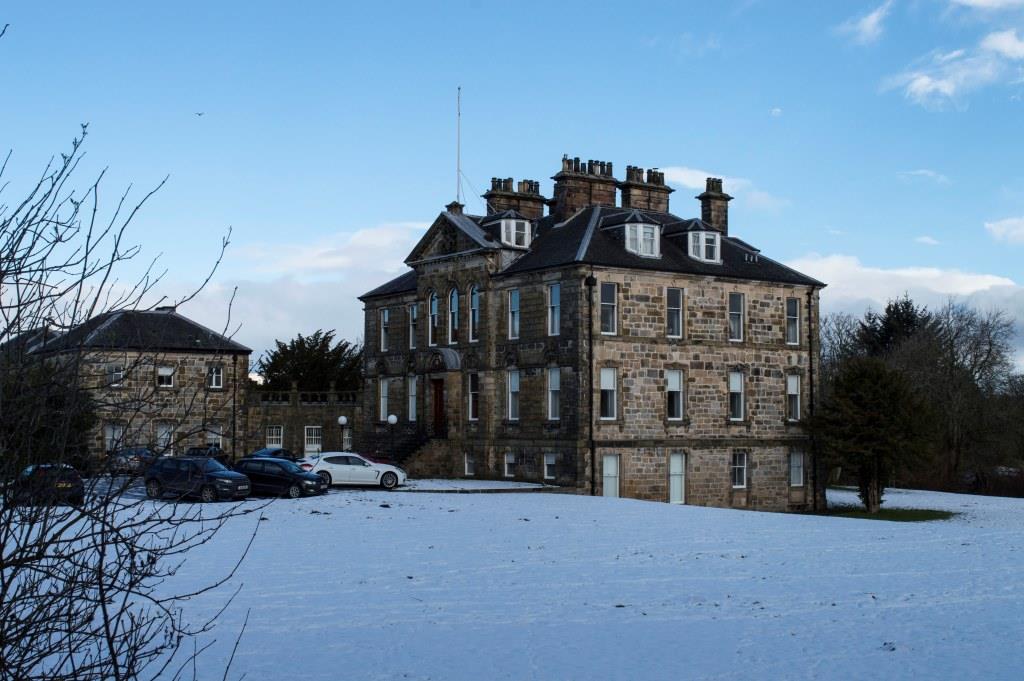 Cumbernauld Castle was a large and impressive castle first built by the Fleming family in the late 14th century on the angle of land created between two watercourses – the Bog Stank and the Red Burn. The castle was severely damaged in the 17th century, and was replaced in 1731 by Cumbernauld House, with some of the old masonry used to build the new mansion. Today the grounds are publicly accessible, but the house and castle site are in private ownership.

The earliest castle at Cumbernauld is said to have been built by the Comyns, who held Cumbernauld from the mid 13th century. A mound to the north-east of Cumbernauld House is said to be the motte of their earthwork castle, but the Ordnance Survey name book records that it was erected as a monument to Lord Elphinstone being made Governor of Madras in 1837. It is possible that they did have a castle on the site, but no remains of it survive, and it is likely that when Sir Malcolm Fleming was granted the lands by Robert Bruce, he was eventually able to reuse the Comyn site. In 1371, the second Sir Malcolm decided to relocate the centre of his lordship to Cumbernauld, and embarked on an expansion of any existing fortifications. The likelihood is that Sir Malcolm built a large rectangular (or possibly L-shaped) tower with a courtyard, which was extended by his descendants. The Pont map of the East Central Lowlands of c1590 shows that the castle was perhaps extended to form a large Z-plan tower house by this date.

Sir Malcolm was succeeded by his grandson Thomas in 1363, but financial problems meant that he sold most of his lands by the time of his death in 1382. Cumbernauld was retained by the family, though, and passed to Thomas’ 2nd cousin, David. Although several of the Flemings were killed or executed, the family fortunes prospered in royal service, and Mary Fleming was one of the companions of Queen Mary in exile in France. The roof of the great hall collapsed during Queen Mary’s stay in 1562, suggesting that a separate hall building was amongst the additions to the castle. In 1588 all the Fleming lands in the area were raised into a single barony of Cumbernauld for John Fleming, and despite his son signing the Covenant, the Flemings took no active part in the Wars of the time. This did not prevent Cromwell targeting the castle in 1651. The extent of the damage is unknown, but the surviving buildings were retained for use as stables – presumably the top storeys at least were rendered uninhabitable.

Archaeology has shown that 65 metres to the NE of the house, a wellhouse, a large round building (perhaps a tower), a curtain wall, cobbled courtyard and buildings with cellars were sited, and were possibly used from the 14th to 16th centuries. One of these buildings has been categorised as a prison. As the stables were to the south, this implies that the total size of Cumbernauld Castle was very large, although the full extent and layout is clearly a matter for conjecture. Following the construction of the mansion, the use of Cumbernauld as a defensive site ceased. There is little if any evidence of the castle visible to the public today.